With Good Mead behind them, the Marshals set off toward Easthaven to follow-up on a lead about Duergar operating out of the Easthaven Ferry.

After a few hours of travel along the Eastway, the Marshals once again run into a talking animal. The fox is much more amiable and talkative than the others, however. With an inflated sense of self-worth he warns the Marshals that Easthaven belongs to Ravisin.

The fox normally keeps “undesirables” out of Easthaven, but the Marshals have been given the go-ahead. The party are mostly annoyed with the fox, but not enough to provoke him. The fox warns he has friends in high places, and with many teeth.

Easthaven is the largest town the party has been in since Targos, session 3! The town is mostly empty, however, and soon they realize why. A large crowd has gathered around a bonfire. A bonfire with a man inside, skin melting away. The grisly execution is officially sanctioned by Speaker Waylen and his trusted adviser, Ravisin, who gives an ominous speech to the crowd about the will of the Frostmaiden.

There’s a bit of confusion on the players’ end about who Ravisin is (“was she one of the wizards?”). But after meeting with her and the Speaker, they quickly learn about her strong anti-wizard stance, and her fealty to the goddess of the Dale. 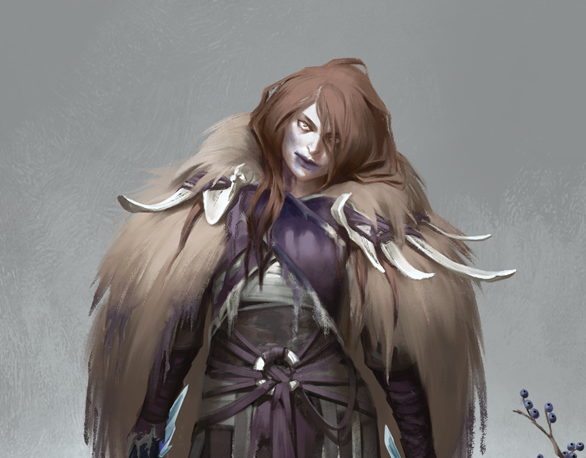 Ravisin, who originally came from the same Reghed Tribe as Thimbleweed, claims to be a direct conduit to the Frostmaiden, and that only by exerting her will and influence can the people of Easthaven (and the Dale) survive the everlasting night.

Ravisin is certain that the wizards caused the perma-night (and wants to hunt them down), but according to the party’s investigations (mostly talking to Ravisin) the wizards arrived afterward.

The meeting lasts for some time, with Valravn and Fray especially upset about the zealotry of Ravisin and her controlling influence over the Speaker and the town. The Speaker listens to everyone and accepts the criticisms, but Ravisin is adamant that the wizards are meddling outsiders, and a menace to the Dale.

What the players don’t seem to realize (and the DM reminds them afterward) is that the murderous Dzaan was last seen heading far to the north with his undead bodyguard, after the trek up the mountain. What was he doing alone, confused, and sans bodyguard (and spellbook) all the way in Easthaven?

During the meeting Speaker Waylen gives the party a message received from Bryn Shander. The message requests the Marshals return to Bryn Shander and deal with a goblin who has requested treaty negotiations, and provided directions to the goblin fort. The carriage the Marshals brought in back in Session 2 has also been re-fitted and ready for use, opening up the Dale for further travel.

After the meeting, the captain of the guards pulled the Marshals aside. She revealed that she had kept a book that Dzaan had on him when they arrested him. She confirms to the party that not everyone is on board with the extreme worship of the Frostmaiden.

Weirdly, the book is a simple traveler’s guide to Icewind Dale that can be picked up at any general store in Ten Towns. But written in the margins is some kind of coded cipher. Edmond begins to decipher it, but it would take some time (Three successful DC 15 Investigation checks, maximum one attempt per day).

The Marshals had asked Speaker Waylen about any strange activities related to the Duergar (while not actually mentioning the Duergar themselves). The Speaker isn’t sure, but admits that the docks have been shut down for months, with no one patrolling that area.

The party heads out on the pier towards the Easthaven ferry. The entire lake is frozen over, the ferry encased in ice, save for the door that’s been carefully chipped away. Fray slowly opens the door and steps inside, seeing several bed rolls on the floor, supplies, and a few rolled-up maps.

Before she can look at anything, a dwarf-size suit of armor in the corner begins whirling and grinding. The armor looks cobbled together from various scraps, armor plates, and weapons. A pair of battleaxes spring out of its back and hover in place (one custom Animated Armor and two Flying Swords/axes).

The Duergar Contraption slashes with its axe-hand and fires a spray of shrapnel with its arm-cannon, peppering half the party. With their relatively high AC, the enemies stick around a few rounds, but Edmond finally connects his Thorn Whip, dragging the automaton toward the doorway, and using his alchemy on the floor to push it further outside.

The following round he leaps across to the pier with another Thorn Whip attack, dragging the contraption off the boat and into the frozen lake below, where it breaks the ice and beings to sink.

What secrets does the ferry hold? We’ll find out next time!

2 thoughts on “Icewind Dale: Rime of the Frostmaiden Session 22 Recap”