Triumphantly returning from the Verbeeg Lair, the Marshalls still have to deal with the giant bee infestation in the Good Mead brewery. They opt to Long Rest first, identifying a Pearl of Power and Wand of the War Mage +1 from the tomb in the cave. Thimbleweed takes the pearl, while Edmond integrates the wand into his mechanical arm.

Before returning inside, they report to Olivessa about the renegade employees, their experiments, the cave lair, and the dead team that hadn’t survived, including the speaker. For whatever reason, Thimbleweed remains tight-lipped over the survivor he found and stabilized in the warehouse, leaving her there over night.

Olivessa reveals a security system in the manager’s office, the one room the Marshals hadn’t found yet. A chemical agent could be pumped into the biological areas to stem any fungal outbreaks or diseases. It wasn’t exactly designed for monstrous bees, but she believes it could help destroy them as a last-ditch effort.

Upstairs from the brewery floor, the manager’s office overlooks the brewery to the north and the temperature-controlled vivarium to the south, where the monstrous bees had spread.

Inside a locked drawer in the desk the Marshals find a hand crossbow labeled “Pacifier,” and several tranquilizer darts, along with a pair of potions that when ingested, force the user to tell the truth as per the Zone of Truth spell. This company doesn’t screw around with its employees!

The other important feature is a locked lever that operats the poisonous gas.

The Marshals spend an impressively lengthy time discussing the moral implications of gassing the large, sentient, and angry bees. Ultimately they decide to do it, though not before Thimbleweed casts Speak with Animals, and antagonizes the queen through the cracked window.

Fray pulls the lever on Thimbleweed’s command, and the effect is immediate. Poisonous gas pumps through tubes throughout the outer facility, smaller bees dropping while larger ones begin moving and acting erratically. The queen goes into a desperate frenzy, crashing into the windows and slicing them apart with her sword-like talons, ordering other bees to smash themselves into the windows to break them down. 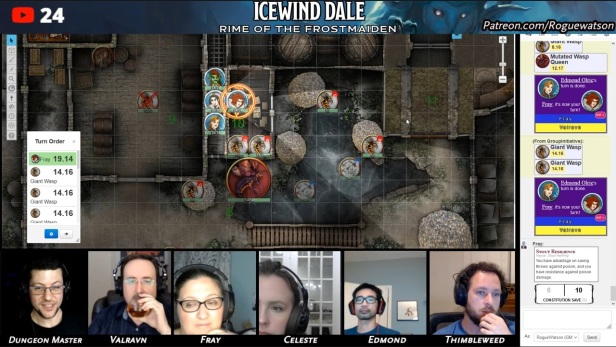 Edmond uses a spell scroll to web one of the windows as Fray throws Thimbleweed out of the room and shuts the door behind him. The windows shatter as the bees, and the large angry queen flies in to attack her (though the web stops some of them).

Fray enters rage mode, growing a spiny tail for defense, and effectively tanks alone in the room against several bees, the poisonous gas threatening to make her sick while killing bees all around them.

Edmond and Celeste take turns opening the door to cast spells and hit the queen, while Valravn and Thimbleweed run downstairs to target the queen with spells through the one intact window. They’re entirely unsuccessful thanks to the queen’s bulky saving throws, but the melee attackers are able to land some hits despite the 19 AC of the Hellwasp statblock I use for the bee queen.

The queen also suffers from the effects of the poison each round, and eventually the Marshals emerge victorious. Thanks to Fray’s solo tanking, and resistance to piercing damage (rage) and poison damage (stout resilience), the party barely suffers a scratch through the entire ordeal.

The rest of the bees succumb to the poison, and the Marshals finally leave the mead hall. Fray drags an entire bee corpse to prove to everyone what happened. They exit the facility to find a crowd gathered in front.

Olivessa announces the death of the town speaker, and the crowd parts to reveal Shandar and the woman Thimbleweed had met, inadvertently nearly gotten killed, then stabilized, then left behind in the warehouse. The Marshals have to convince the crowd that they did what was best for the town, while not exactly backing Olivessa on becoming the new speaker.

Fray has an awesome moment where she whips the bee corpse out and hurls it at Shandar, slicing it in open in front of everyone, causing him to drop his boasting and run off scared. Valravn suggests they elect a new townspeaker from among the population.

Whatever happens next is out of the Marshals’ hands as they leave Good Mead and head for Easthaven to follow up on the Duergar note pointing to another outpost.

One thought on “Icewind Dale: Rime of the Frostmaiden Session 21 Recap”