After destroying the surprise mimic in the prince’s bedroom (X10), the party hunkers down for a quick short rest. Edmond doesn’t even hesitate and re-casts Disguise Self. He’s not about to give up their most powerful weapon in exploring the duergar fortress of Sunblight.

There’s nowhere else to go but up… or down.

In the the southern training room (X12), Edmond (disguised as Prince Durth Sunblight) hops into the elevator, going up. He explores the entire Ice Gate Level unmolested, enhancing the disguise with his swagger and abrasiveness.

His hilariously on-point roleplaying is soon rewarded. Upon seeing the workshop where they manufacture the Hammerer exoskeletal suits (X14), Edmond finds a powerful, prototype mechanical arm, the perfect thing to replace his own! He’ll need to short rest to identify and attune to it, but it radiates with power.

While he notes the western elevator (X13) he returns to the eastern one and back down to the party. This time he goes down to the forge level, arriving in a small room guarded by a single Duergar Hammerer (X30). The Hammerer can barely converse, but isn’t hostile to the disguised Edmond.

However, Edmond misjudges the Hammerer’s sentience, as he calls for the rest of the party to come on down. They do, and immediately the hammerer turns hostile, moving to protect the prince.

What follows is one of the more fascinatingly dramatic combat encounters I’ve ever witnessed in all our years of D&D playing. 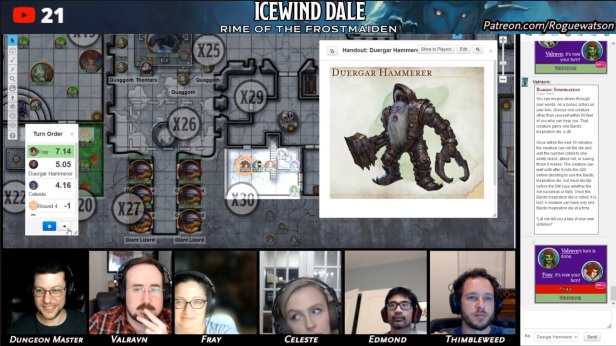 Edmond wins the initiative battle, successfully grapples the Hammerer, and shoves him into the large stone gear that operates the elevator! I ruled that if the situation remains the same by the end of the round, the gear will crush the Hammerer, destroying him, and most likely destroying the mechanism that powers the elevator.

The entire party starts freaking out, growing concerned that their way out will be destroyed. They know there’s another elevator, but not sure how to get to it from here.

Thimbleweed uses his turn to try and grapple the Hammerer from Edmond and move him, but Edmond uses Inspiration to win the contested Athletics check. The drama thickens!

Valravn is nothing if not a glutton for drama, and uses his turn to give Edmond Bardic Inspiration. More drama!

Fray feels incredibly conflicted about the entire situation. The decision is made when Edmond-Durth acts too flippant to her warnings. She moves to knock him down.

In a very tense exchange, Edmond wins the first contested Athletics/Acrobatics check thanks to Bardic Inspiration, but Fray wins the second (Extra Attack), sweeping the leg and knocking him down.

With Edmond down, the Hammerer is able to extract himself from the gears, though I forced him to make a DC 10 Athletics check. A part of me wanted him to be crushed and the gears destroyed, but the dice save him.

The Hammerer gets up and charges Fray, thinking he needs to protect the prince. The rest of the party finally snaps into combat mode and takes him out, but my goodness, the drama of what might have happened!

Edmond is so chuffed at the drama that he throws open the northern door and enters the temple (X29), finding a chained up, tortured, mutilated mind flayer! The creature locks eyes with Edmond and uses telepathy to speak, quickly realizing Emond is another creature in disguise.

The Marshals learn that this mind flayer, whose name is F’yorl, was captured from the Underdark and brought here as a living trophy. Duergars despise their former slavemasters, and eagerly cut off his tentacles, and surgically removed parts of his brain that power his psionic powers. All that’s left is his telepathy, and his seething hatred.

The enemy of my enemy is an unusual ally. The party decides to free F’yorl after he gives them some intel, including the location of the forge, the throne room, the Underdark entrance, and a secret passage into the interrogation chamber from this temple. Fray even feeds him the slain duergar hammer to give him a bit of his strength back. Delicious brains!

The mind flayer is especially interested in Celeste. He can feel the touch of his kind upon her, and feels her enhanced mind almost like a kindred spirit. He also senses the psi crystal that she possesses, the crystal she found in a mind flayer scroll way back in the gem mine in Termalaine. He demands that she relinquish it to him, then offers to trade it for information about what happened to her. He claims the crystal can restore his powers.

Celeste refuses, however, finding the creature off-putting and disturbing. And he doesn’t exactly have the power to oppose the decision. Though freed, he has no effective attacks or spells, and agrees to remain behind to shore up his strength, trusting that they’ll speak again when this is all over.

The Marshals open the secret door and move down the tunnel, hearing voices coming from the other side. They hear the sounds of torture, and a booming, commanding voice demanding answers about traitors in the midst.

They open the door at the end of the tunnel, stepping out of a false iron maiden. A pair of duergar Mind Masters are torturing a female duergar, the Captain of the Guard, Nefrun.

Edmond-Durth is back to his swagger, demanding they leave it to him, but I finally force a Persuasion check, and he fails to pull rank on his own father.

Failing that, he distracts them by moving the prisoner to the torture rack, while the rest of the party prepares to rush into the room for an ambush, which we’ll begin with next week!

One thought on “Icewind Dale: Rime of the Frostmaiden Session 29 Recap”