Welcome to Patron DnD, where Platinum-level patrons and I get together to play Dungeons & Dragons via Discord and Roll20. Patrons also get exclusive access to private videos, custom 5e content, and participate in monthly DM Roundtables.

This Patron DnD Campaign will feature a rotating cast of players, depending on signups, availability, and earned Platinum Points.

Music by Kevin MacLeod.
Token art by Jimmy McClure.
Chat with us in the Official Discord Server.
Support the channel via Patreon!
Read our House Rules!

Ten years ago, the Ghoul Imperium of the Underworld and the vampires of Morgau marched into Krakova and conquered the kingdom entirely, establishing the Greater Duchy of Morgau and expanding the borders of the Blood Kingdom.

The undead occupation has been kept in check by resistance from the Court-in-Exile, as well as opportunistic reaver dwarves who sailed across the Nieder Straits.

But the hidden machinations of the ghouls swirl beneath the surface. Rumors abound of an even more sinister plot that threatens not just one kingdom, but the entire world of Midgard.

Empire of the Ghouls is designed by Richard Green, and published by Kobold Press. It takes place in Kobold Press’ fantasy world of Midgard.

After a 400 mile journey north, the party finally arrives at The Black Canton, also known as Grisal, the most militant city of the dwarven Ironcrags. The dwarves here are prickly for good reason — it’s near the border of Doresh, a province of Morgau, a land ruled by undead vampires.

The party asks about Trehild Shardspike, the loremaster they were sent to seek. But non-dwarves aren’t permitted to the lower levesl where she resides.

They’re instead brought to see Captain Brogan Bonebasher, currently unwinding at a local tavern after suffering heavy losses and forcing to retreat from a skirmish near the border.

After some discussion (and sympathy from the party), Brogan asks them to help him retrieve the bodies of those he was forced to leave behind. In return, he’ll get them access to see Trehild.

After a long rest in a warm bed the group sets out toward the east, along with Brogan’s surviving entourage, a pair of dwarves named Joric and Delgur.

The dwarves remain quiet and serious during the two-day trek, reciting the names of the dead over a campfire like an ominous litany.

When they reach the site of the attack, only a few bodies remain, putting everyone on edge.

Everyone begins to move the bodies onto a wagon, a disgusting task that leaves half the party poisoned.

Suddenly from behind a group of large boulders a hoard of zombies emerge, led by a pair of undead dwarven graveslayers, fallen paladins from Grisal.

I/O fires off a Spike Growth spell at the zombies, hoping to tear them apart before they reach melee range. But the graveslayer acts first, heedlessly charging through the spikes to slash at her, ending the spell.

As I/O is surrounded the rest of the party charges into action. Kovac shows off his Dawn Blade skills, radiant beams pouring into zombies and nullifying their Undead Fortitude. Lucian uses his Clockwork Soul feature to reverse the poison disadvantage, while Bahn steals a few kills with his psychic whispers.

The graveslayer proves a formidable opponent, but so is I/O when she transforms into a bear!

Eventually the undead are put down, though Brogan and the party are upset that one of the dwarven redshirts has died in the attack. Another body on the wagon.

Brogan is thankful for the aid, mustering up more emotion and gratitude than he’s showed in the last several days, and rewards the party with a magic shield that helps aid against life-draining attacks. As a frequent target, I/O graciously accepts the shield.

Returning to Grisal, Brogan is true to his word and leads the party down the lower levels of the city, knocking on an unmarked door. It’s the home of Trehild Shardspike, an elderly dwarven sage and former cleric. She’s giddy at receiving visitors, and is more than happy to share her knowledge about Sister Adelind.

Adelind was a Spear Maiden of Sif, a holy warrior who fought to defend Krakova during the undead invasion ten years ago. She succeeded in slaying a major vampire lord, though was ultimately killed in battle by swarms of ghouls. A piece of her robes was recovered and placed inside a reliquary. She was declared a patron saint and a martyr by Queen Urzula, now known as the Queen-in-Exile for having been forced to flee her country.

It’s rumored that the holy robes possess divine powers that wreck havoc against the undead. Trehild isn’t sure where they are now, but most likely still in Krakova. Their best lead is the Free City of Jozht, a city on the northern coast of Krakova that’s now held by the reaver dwarves of Wolfheim, who have successfully kept the city free of undead control.

Jozht is a long ways away; Trehild suggests visiting the Black Fortress next, just a two-day journey north, to speak to General Jaro Whitebeard. The Black Fortress is the primary military base of operations for the dwarves against all their northern and eastern neighbors.

When the party shows her the sketch of the unidentified man found on the darakhul, she confirms that he looks Krakovan, but unsure of his identity. She’s confident that General Whitebeard, who frequently deals with Krakovan refugees, should know more.

She’s also able to identify the name “Shroudson,” found on a note written to Felixia back in the Temple of Forbidden Ecstasies. Vukas Shroudson is a darakhul shadowmancer and spymaster, and the right-hand lieutenant of Radomir Marrowblight, a high priest of the Hunger God and one of the most powerful darakhul in the Imperium.

Trehild believes Shroudson is stationed somewhere in Krakova, and if he’s involved in a sinister plot, it’s dire news for everyone.

With their questions exhausted, the party thanks her for her time and take their leave — though not before Kovac and Bahn team up to pilfer some magic scrolls tucked around her room.

Onto the Black Fortress we go!

Despite his station as a military commander, Jaro Whitebeard is welcoming and tired. Hundreds of refugees from the war still linger around the fortress, hoping to gain safer entry to the south. The dwarves generally want to be helpful to their former enemies, yet still paranoid toward undead spies and agents.

Jaro instantly recognizes the man in the sketch — Duke Avgost Walerska, brother of the late King Eynryk of Krakova. A man of royal blood thought to be dead until only recently, when rumors emerged that he had joined the Court-in-Exile with Queen Urzula.

Why the ghouls are after Duke Avgost specifically Jaro isn’t sure. He believes the party is on a noble quest to thwart the Imperium’s schemes, yet isn’t ready to immediately divulge the location of Krakova’s Court-in-Exile — a very well-kept secret among a select few.

Jaro offers to let the party into their training halls, the same halls used to train their own paladins and warriors. The party agrees, and they’re led deep into the bowels of the Black Fortress, beyond a door, and let loose among the flickering torches.

In a northern room they find a fountain, with the inscription, “For the pure of heart, drink and be fortified.”

Ry drinks first, finding the water nourishing and gaining some temporary hit points. Lucian tries next, but the dhampir finds the waters poisonous, barely choking them down! The dwarves don’t take kindly to the undead, even those with only partial links to the vampires.

Kovac’s water goes down smooth, but the selfish, evil-aligned Bahn also chokes it down, leaving him poisoned and hilariously bitter. As a gearforged, poor I/O can’t feel the effects regardless. I love that everyone had to try!

Beyond a door everyone steps through a pair of statues, making a save against a secret Zone of Truth spell, while a third statue asks them probing questions, such as their fears, desires, and weaknesses.

Big winner goes to Kovac, who replies to the “What do you fear,” query with a badass, “Nothin’!”

Bahn’s high charisma lets him resist the forced-truth spell. He lies about his loyalties, causing the statues to fire radiant beams, scorching the increasingly angry kobold!

A portcullis bars their path further down the hallway, but a side room contains a giant bronze lever. They pull it, hearing the portcullis rise, but the purple-flame braziers burst into ghostly specters.

The party make quick work of the apparitions, through not before Bahn received some friendly-fire Faerie Fire, making the kobold hilariously apoplectic.

The party has another problem — the lever keeps trying to pop back up, lowering the portcullis. I/O stays behind to hold while the others rush back, but the nimble Kovac falls through a pit. More shamed than injured, he climbs back up Ry’s rope, as everyone jumps across. 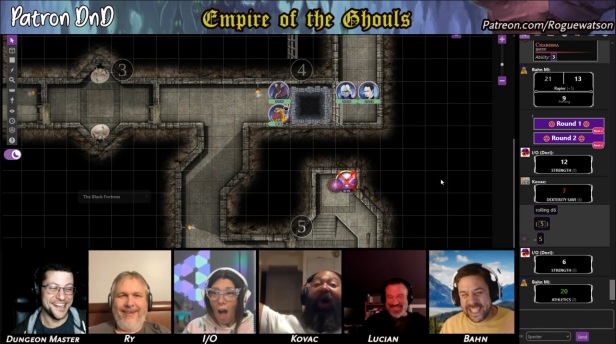 Memorable moment: Bahn yelling back at I/O to hurry up, grabbing Kovac, and leaping across the pit with a nat 20 Athletics check! (Wasn’t he still poisoned? oh well, it was awesome!).

I/O hurries across the pit as the portcullis slams shut, leaving them with one final room. A construct is attached to four pillars with spectral chains. As they open the door, the chains glow green before dropping to the ground. Black and green vapors rise from the construct, and the party can see and hear the ghostly creature trapped inside as the Fellforged approaches.

The inscription reads, “Our enemies user our soldiers against us, so we do the same to them.” Roll for initiative!

The epic boss battle proves nearly fatal for the party, as they feel the sting of its life-draining necrotic punches, while it shrugs off many of their attacks and spells. It chews through I/O’s bear form, and succeeds in killing both I/O and Kovac, before Ry loads up a vibrating bead found in the Zobeck Catacombs into his gun, fires, and destroys the frightening creature.

A secret door opens and Jaro is there. He’s impressed with their tenacity, and agrees to pay to resurrect their fallen comrades. Everyone is shaken by the experience.

Jaro knows he got his point across — don’t fuck with the dwarves, and agrees to give them the information: the Court-in-Exile is hiding out in a castle in Kariessen, about a week’s travel north, right on the border of Dornig and the Greater Duchy of Morgau.

Eager to leave these dwarves behind, the party sets out once again on a northern route.

Support my channel via Patreon! Upgrade to the Platinum level to join in this campaign!