We assault the crumbling Scarlet Moon tower and confront the leader of the druids-turned-fire cultists.

Four weeks later and we finally finish Scarlet Moon Hall. It chopped up quite nicely with our heroes tackling the entire tower itself in this week’s session.

It ended up a bit anticlimactic. The big boss of the fake Scarlet Moon druids, Elizar Dryflagon, lasted only a single round. The whole mini dungeon-within-a-dungeon felt like an epilogue to the epic battle in the courtyard last week.

I was wary of making these fights too difficult within the tower. The NPCs there had forewarning of the party, and thus could prepare and set up an ambush.

On the other hand, my party correctly decided they didn’t have the time for a Long Rest, and opted for a Short Rest. They hadn’t so much as Short Rested since beginning their investigation and assault of each campsite.

So my PCs were mostly healed but still lacking most spell-casting options (Miri does regain all Ki points after a Short Rest though). I decided to lay down a simple trap with the fire priest set to unleash a Fireball when the PCs reached the top of the scaffolding near the tower. Talus used his one recovered 3rd level spell slot to Counterspell it, and the the fight was on. 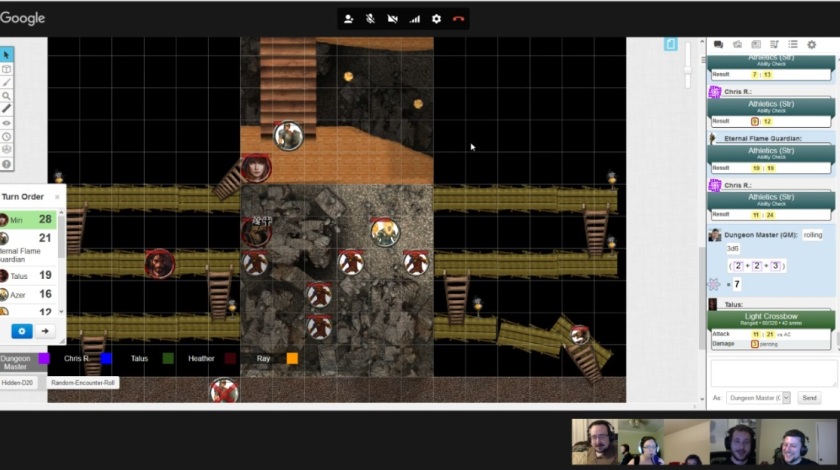 It probably would’ve been more interesting to fight on the rickety scaffolding, but instead the fight quickly moved into the tower. Kethra stayed on the bottom and shot upwards, then had to take two complete rounds Dashing to get to the fight when she ran out of outside targets.

Inside, Kalinaar used the Shove action to send the Azer, a sort-of metal dwarf from the Plane of Fire, tumbling down two stories into the rubble at the bottom of the tower. I gave Kalinaar a taste of his own medicine by shoving him down using one of the Flame Guards.

It was delicious seeing him yell “oh shit” when he fell down to find a room full of Magmins, and a pissed-off Azer. Of course, I completely forgot about this Boots of Springing that he acquired in the last campaign, and he simply jumped right out. The Azer lacks any ranged attack and so was effectively taken out of the fight.

At that point I probably should’ve added the guys from the barracks upstairs, but I delayed another round. The priest ran upstairs to warn them, followed soon by the party. The Guards got some good hits in but the PCs were savvy enough to go after the fireball slinging fire priests first.

Also at this point I really should’ve introduced Elizar Dryflagon, the former druid turned fire cultist who leads this area.

Again I wanted to stagger the opponents so as not to throw too much at the somewhat weakened party. A priest ran upstairs to warn him, even though he could’ve easily just heard the noise and came down. The campaign book suggests that the barracks group arrives three rounds after the first tower fight, while Elizar comes as soon as possible after they’re alerted. 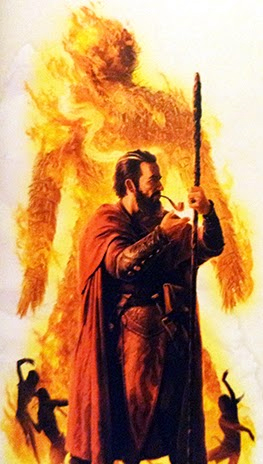 Unfortunately my party is very keen at killing things. Soon I was left with just Elizar facing off against our foursome.

Knowing I’d be lucky to get more than a single round, I unleashed his most powerful spell – Wall of Fire. I rolled 29 for damage on 5d8, and the entire party failed their DEX Saves. Score one for the bad guys.

Well, almost. Both Miri and Kalinaar are resistant to fire, while Kethra and Talus used Inspiration to make the save. So half damage for all, which was still a decent chunk.

After that the party swarmed him, cutting him down in about 1.5 rounds while he made pithy fist-shaking remarks. I do so love a cheesy evil villain. Not to self – never end up with the Big Bad alone in a room.

I was bummed I didn’t get a chance to use his cool smoke mephit-summoning pipe. I was so entranced by this ability that I let Talus investigate and loot it. Seems like a really fun toy to use, and it recharges once a day. An odd oversight that it’s not a lootable magic item in the campaign book.

The party opted to skip going back down and dealing with the Azer and Magmins (I still awarded half xp for the Azer). They presumed the tunnel down there leads further into the fire base. Given the set-up of the previous dungeons I’d say that’s a fair assumption!

Given the open world-nature of “Princes of the Apocalypse,” I’ve been a bit more cavalier with suggestions on where the PCs should be going. Basically telling them, “the deeper you go, the harder it gets.” Yeah, yeah, that’s what she said.

I also warned them at this point to take note of the order they tackled the cults in, and the relative strength of each one. All dungeons are definitely not created equal, level-wise.

My players mentioned they should probably be going after Miri’s mom next (a captured diplomat), returning to the Sighing Valley and a locked entrance, now in possession of the key they got several weeks ago. First, though, a much needed Long Rest back in town. Gotta wash off that smoky smell.