We officially meet Artus Cimber and enter the lost city of Omu.

After giving the frost giants the slip last session, our party runs into Artus Cimber and Dragonbait, before officially making their way into the lost city of Omu.

Artus is a tricky NPC to use in Tomb of Annihilation. He’s technically superfluous to the main plot, he’s a major named character from the Forgotten Realms universe, and he carries a potential world-destroying artifact.

Like many of the side content in ToA, I tied him directly to one of my players’ backstories. In this case, he was the person Xandala hired Mannix to find – her father. He doesn’t like using the ring unless he absolutely has to, making he and his saurial companion more a pair of average adventurers than a hugely upsetting balance of power.

After a lengthy chat with Artus reminding the PCs of Ras Nsi’s backstory, and revealing his own quest to find Mezro and his wife, he agreed to at least temporarily join them as they journey into Omu.

Mannix left a message with Xandala, Therin recast Pass Without Trace, and the expanded party went the long way back towards Omu, trying to avoid the Frost Giants.

The forbidden city is sunken in a basin, 100-feet below sheer cliffs with a single giant staircase entrance. The now ruined city is only about 0.2 square miles, at least what’s left standing. At the bottom of the stairs I placed a mural that served as a map of the city, which included recent alterations such as the now flooding river and giant lava pit, and moved them over to the awesome Omu map.

Near the entrance in the southwestern corner was the old guardhouse, which held a wall covered in graffiti with tantalizing secrets and foreshadowing, such as the King of Feathers and the puzzle cubes.

At this point I gave the PCs time to prepare and plan, which involved using their flying monkeys and owl to scout, noting all three giants mere feet away, and one of the wolves prowling very close.

The party wanted to turn tail and escape, then repel down a cliff to get to the amphitheater, which George had seen on the graffiti wall as where the King of Feathers resides – his final personal quest hunt. Not only was that a crazy idea but I was also totally unprepared for it.

They took enough time trying to plan that I had the other wolf – the one they didn’t see, find and attack them. And thus began a combat encounter that lasted over an hour and a half!

The frost giant battle was long but epic, as one of the most challenging encounters this party has ever faced. Three CR 8 Frost Giants and two CR 3 Winter Wolves is well beyond a deadly encounter for a 5-person, level 7 party.

However, they did have Artus and Dragonbait with them. Even without really using the Ring of Winter, they still carry +3 weapons and a buttload of HP. 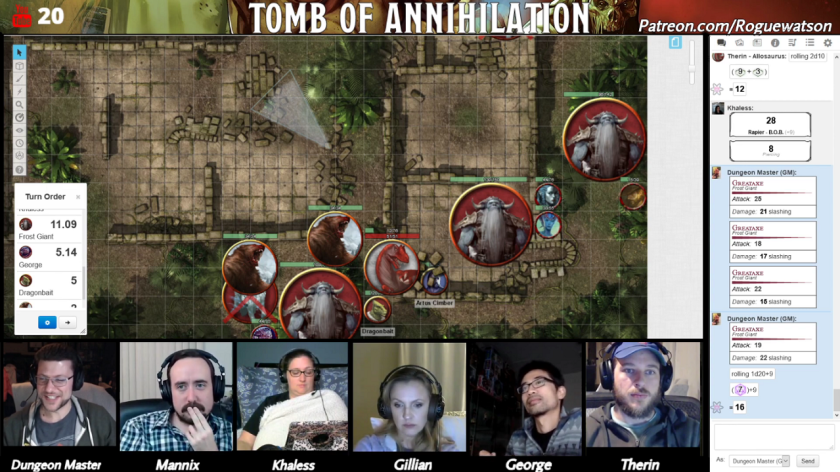 The party respected the giants’ strength and played things very carefully, holding position in their ruined building and first fighting the wolves as they came, then attacking and retreating away from the terrifying giants, who were more than capable of dishing out 50 damage a turn! The party also hadn’t long rested since the Steel Predator fight, and they unleashed just about everything they had: Gillian’s Call Lightning and Polymorph (a fail on the latter), Mannix’s blinding dagger (also a fail, giants have +8 CON saving throws!), and Therin summoning a pair of bears before finally wildshaping, nearly taking himself out in the process due to his recent adamantine bone upgrade.

It might’ve seen scary at first, especially when I buried Artus in rubble and essentially took him out of the fight, and the party was forced to divide to take on all three giants at once.

Khaless finally went down (a first for Heather since all the way back in our Princes of the Apocalypse campaign!) after deciding to stick with Gillian rather than do the usual Rogue thing of bonus action disengaging to flee, absorbing three nasty hits for herself and ending up unconscious. Gillian returned the favor by quickly getting her back up with Healing Word, and Mannix would use his final Portent Die to ensure she crit a powerful vengeance strike of nearly 40 damage.

The party was broken, bruised, and bleeding but the giants finally lie dead; their plans to kill them all and steal the Ring of Winter was thwarted. A grateful Artus was rescued from the rubble, and now the forbidden city awaits.

One thought on “Tomb of Annihilation Session 56 Recap”