Last week the party became separated in the Gears of Hate. Mannix, Khaless, and George were stuck in the Control room with slime pouring out of some nearby tubes. Therin, Gillian, and Ishmakahl were back in the central pentagonal room, where the rotating cog-rooms revealed the path to the next cog, as well as a room full of gas that transformed the vegetation around them into a trio of shambling mounds.

A separated party is far from helpless, however – especially fully rested! Therin used Destroy Water to clear the area around them of the noxious gas, then transformed into an earth elemental to pound on the living shrubbery, while poor Ishmakahl was engulfed by another and ultimately killed.

Gillian summoned the dao they had befriended back on level two, using one of her three assistance’s (wish is a strong word) to enlist the dao in the battle. She effectively began bludgeoning them with her powerful maul.

Meanwhile the other three tried to figure out how to get out of their room. George broke off the gold lever, stopping the flow of slime, but the red button would no longer open the door that had slammed shut.

Mannix used his final magic window from his Vest of Many Pockets to open a path, and after turning the rooms back to the middle configuration, they raced to join their comrades and destroy the plants, though Mannix would take a harsh beating in the process.

With the plants destroyed the party deliberated on how to get everyone into the right-most cog room. Mannix volunteered to stay behind and work the controls, turning the cog-rooms once again and allowing the rest of them to proceed onward Therin’s earth elemental form was immune to poison, allowing him easy access into the northern gas room to crush the gas-spewing tube and loot a nearby corpse. 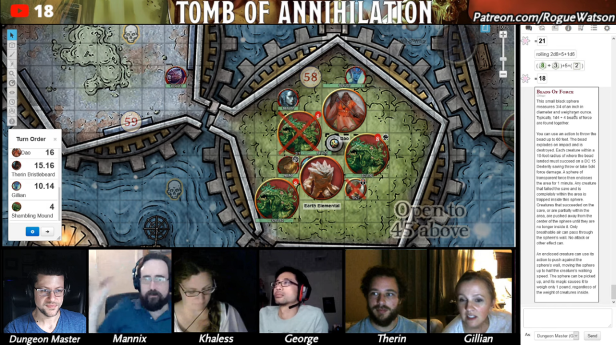 The right-most cog room held five magical wardrobe’s bearing different symbols, such as a flexing arm, a foot, and a heart. An iron portcullis to the north had six dimmed crystals.

The party quickly figured out the symbols matched each of their primary attributes. When opened, each wardrobe magically transported a PC into a fantastical situation that required using that skill – whether it was wrestling a Minotaur in a tavern, or playing human-chess with an aboleth. The crystals lit up whether they succeeded the task or not, but failure meant the opposing creature(s) would attack them.

Therin’s earth elemental form succeeded three times (thanks to a buff from Gillian) while Khaless and George would fail and take some damage in the process.

I heavily modified the Cog of Blood room from the original book, as I was dissatisfied with a series of random battles. The party quickly figured out what was going on, and it was fun to roll mostly contested skill checks between exotic monsters and the players. The key was only making them do each wardrobe one time; the crystals lit up whether they succeeded or failed.

With only five wardrobes present on the map, the sixth one, Charisma, appeared at the end, involving a stage performance between George and a Succubus/Incubus. George needs singing lessons!

Mannix had to deal with his own conundrum – escaping the control room. Unseen Servant only has a range of 60 feet. He summoned it as far as he could, ordered him to work the controls, then ran like hell to get to the central cog room when the rooms began turning. With a successful Athletics check he made it safely across, though he had Gaseous Form ready just in case.

The Southeast exit was blocked off, so the party traveled north, where a corridor turned sharply left. Stairs down lead to a long hallway full of broken and tarnished objects.

The party was extremely careful and smart. They tossed coins at the ground, then through the air with mage hand, watching as they rusted and deteriorated before their eyes. There were afraid to even step foot inside, though they saw no organic material, just metal and cloth.

Mannix stripped down to his undergarments, shrugged off all his things, and went down into the corridor. The magical effect of the hallway destroyed what little clothing he had, so a bare naked Mannix moved further into the corridor.

At the far end, hanging over an archway, an ivory ring hung from the mouth of a bull skull, radiating magic. Mannix used Mage Hand to remove it, and the magic shut off, rendering the hallway inert. Khaless enjoyed rifling through Mannix’s belongings as the naked angry man returned to the party.

Through the archway they could see a vertical shaft filled with purple clouds and arcs of lightning, giant chains and gears rotated throughout the room, disappearing into clouds above and below. Across on the western balcony was the last of the skeleton keys they needed. The party was even more fearful of this room, and Mannix used Mage Hand to simply pluck the tiny skeleton creature and drag it over to them.

They decided they’d had enough of this level, and descended the nearby staircase into the sixth and final level of the Tomb of the Nine Gods.