The gigantic, colorful dragon snarls, chanting magic under her breath. I stand firm, still disguised as her master, and foil the spell with my own magic, holding my illusory staff out dramatically.

“You can’t do that, I taught you that spell, Mistrivvin,” I yell in a mocking tone. “You are a petulant child!”

Her face contorts in rage, leaping toward me. In a blink her claws rake my skin and her tail bashes me to the ground. The coppery taste of blood fills my mouth.

I finally let the Creator’s disguise drop from my body as I stand back up, her eyes growing wide with confusion.

Smoke surrounds me as I disappear, materializing on the dragon’s back. I pull out the hellfire crossbow and unload magical bolts into the back of her head.

“You were right. Your master is dead. And we are much worse.”

With the enlarged faerie dragon looming over us (enlarged to us, anyway), Kaelan attempted to talk her down, still disguised as the Creator. But she was feeling powerful and vengeful. Roll for initiative!

Mistrivvin expelled a colorful glow, Scarlet instinctively protecting us as she lit up with twinkling starlight. The dragon called to her “experiments,” as a gigantic spider clambered over the walls, sinking its human-sized fangs into Gillian.

Kaelan backed up, firing hellfire bolts at the dragon when another super-enlarged creature, a bat, swooped down and snatched him up. Kethra responded by using her Marid pendant to polymorph the bat, turning it into a harmless fish – though she comically missed trying to catch Kaelan as he fell 20 feet down.

We weren’t sure how Mistrivvin was able to circumvent the pervasive shrinking magic that affected this entire area, but it was creating a huge advantage (literally!) for the pesky dragon.

TIM cast Anti-Magic Field on himself. His body immediately began to grow back to normal size – but only within the confines of the 20-ft sphere, resulting in a hilariously disproportioned hamster ball with a giant TIM-torso inside.

The rest of the party focused down the spider, which had a nasty venom-filled bite, and Kaelan hurled the fish-bat off the castle, assuming that if it survived the fall, it would turn into a normal-size bat no longer under the dragon’s control. 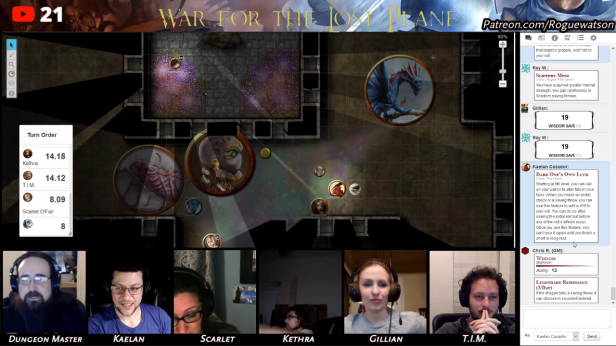 Soon only Mistrivvin remained. We avoided her dangerous Euphoria Breath, but Kaelan’s Creator costume (and verbal berating) caused her to swoop down and viscously assault him with claws, teeth, and tail.

Kaelan used Misty Step to teleport onto her back, unloading hellfire bolts into the back of the dragon’s head. Surprisingly, the damage caused her to shrink in size, from gargantuan to huge, and once again Kaelan fell on his ass, as the rest of the party rushed forward to attack.

The size-reduction made it easier for the TIM-ball to grapple and pull her into the Anti-Magic Field, reducing her size back down to tiny, and essentially ending the fight right then and there.

Scarlet used her sweet talking skills to turn the tiny Mistrivvin into a reluctant ally. We returned to the second floor of the castle. With the dragon’s help we found the Creator’s bedroom and the gameboard that held the answer to the clue we’d found earlier on the control panel.

Putting the pieces in the right spots revealed the name of a certain book. At the library we found the book and pulled it off the shelf, revealing a secret door. Inside were shelves of orbs containing the Creator’s memories of each creature and faction he had brought to this world. The memory orbs!

The most recent entry were the fiends and celestials, and the orb revealed his death at the hands of both Irathon and Rahmael. Plot twist – the two warring faction leaders are actually in cahoots, both breaking free of their respective masters and wanting to live here in the Lost Plane.

However, they viewed the Creator as simply another master, and they weren’t going to serve anyone again. They killed him, and used the portals to bring in their other forces to raze this plane and take it as their own. They took his staff, the source of much of his power, and killed him.

The memory ended, and Rycresh was shocked at the result. With the staff they will unwittingly destroy this plane, and probably others. We’ll need the Creator’s spellbook to stop them, but Rycresh wasn’t sure where it was. He suggested we leave him here while we return to the Verdant Spire.

On our way out we were once again met by a cadre of angels, this time sans Rahmael. The Moon Dog was leading these forces, and he was looking for proof of Rahmael’s deception and betrayal. Hey, take a look at this memory orb!

The Celestials were shocked, and decided they would withdraw from this plane. Scarlet convinced the Moon Dog to stay with us and help defend the innocent people of this plane, while we work to deal with the remaining fiends, find the spellbook, recover the staff, and ultimately take on the renegade angel and demon.