Welcome to Patron DnD, where Platinum-level patrons and I get together to play Dungeons & Dragons via Discord and Roll20. Patrons also get exclusive access to private videos, custom 5e content, and participate in monthly DM Roundtables.

This Patron DnD Campaign will feature a rotating cast of players, depending on signups, availability, and earned Platinum Points.

Music by Kevin MacLeod.
Token art by Jimmy McClure.
Chat with us in the Official Discord Server.
Support the channel via Patreon!
Read our House Rules!

Ten years ago, the Ghoul Imperium of the Underworld and the vampires of Morgau marched into Krakova and conquered the kingdom entirely, establishing the Greater Duchy of Morgau and expanding the borders of the Blood Kingdom.

The undead occupation has been kept in check by resistance from the Court-in-Exile, as well as opportunistic reaver dwarves who sailed across the Nieder Straits.

But the hidden machinations of the ghouls swirl beneath the surface. Rumors abound of an even more sinister plot that threatens not just one kingdom, but the entire world of Midgard.

Empire of the Ghouls is designed by Richard Green, and published by Kobold Press. It takes place in Kobold Press’ fantasy world of Midgard.

Chapter 2: The Holy Robes of Sister Adelind
Episode 3: The Court-In-Exile

The party sets out on a northern journey once more: from the Black Fortress and the dwarven lands of the Ironcrags, into the old Elvish kingdom of Dornig and the border town of Kariessen, which neighbors the conquered land of Krakovar (use this map to follow along!).

On the road they meet a new ally: Torben, a bearfolk Barbarian whose tragic past has put him on a quest for answers and a mission of vengeance toward the Ghoul Imperium. The bearfolk carefully approaches the party, and they accept the large yet kind warrior.

After a few more days of travel, I/O’s superior perception picks up another stalker. But this one isn’t approaching, trying instead to stay hidden.

The party hatches a quick plan to flush them out: I/O will shift into her wolf form and backtrack to stalk the stalker, while the rest of the party continues on the road, rushing to her aid when she howls.

I/O is able to pick up the trail, but when tries to stealthily approach the humanoid lurker, a twig snaps and the figure turns. The unkempt human woman suddenly snarls in anger, drawing a sword and attacking her furry assailant. I/O is shocked when the woman uses long, wicked claws to rake at her and even bite her with ghoulish teeth. A darakhul spy!

I/O is paralyzed by the undead claws, but thankfully the others aren’t far behind. They quickly run to her aid, firing spells and bullets, and swinging meaty mauls. The real MVP is Lucian, who targets the darakhul with Levitate, denying her the ability to escape.

The spy is killed by Torben. They find a note on her body that includes the descriptions of all the party members (save Torben, the newcomer), and instructions to keep tabs on their progress.

The note is signed by Vukas Shroudson, which causes Torben to growl angrily. The rest of the party recognize the name as a high-ranking darakhul officer who had instructed Felixa to set up her operation in Zobeck.

With the spy dealt with, the party enjoys several uneventful days of travel before reaching Kariessen.

Kariessen’s population has swelled with refugees from Krakovar, creating a slum-like tent city that’s far more populous than the town itself. The horrors of the invasion are still very prevalent here. For many of the PCs, it’s a grim reminder; for others it’s a shocking experience. Some even don disguises to help out, such as volunteering at a soup kitchen (Ry) or tending to the sick and wounded (I/O).

But they don’t lose sight of their purpose: meeting with the secretive Krakovan Court-in-Exile.

They present Jaro Whitebeard’s letter of introduction to the guard at House Kavanto, and after a waiting period (and safety inspection via Detect Evil), the party are ushered into the grand hall, where they come face-to-face with Queen Urzula Walerska herself, the displaced ruler of Krakova.

The other attendees include her daughter, Zosia, and the Queen’s brother-in-law, Archduke Avgost Walerska. 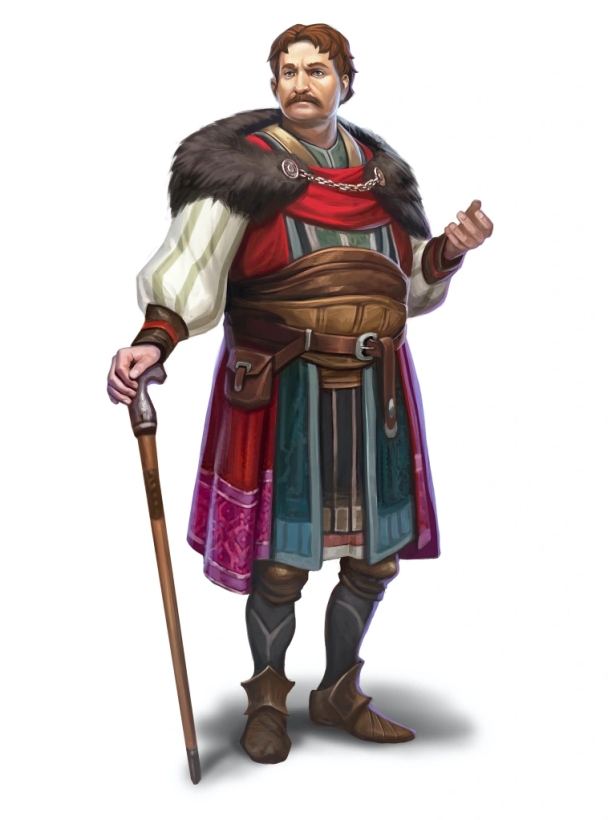 The Krakovan party members, including Alaric and Lucian, bow deeply to their Queen, and vow their commitment to seeing her (and their people) retake their country from the undead invaders.

Everyone recognizes the Archduke Avgost as the man in the sketch, which has been carried by multiple ghoul patrols throughout the area. He’s not sure why they’re looking for him, and seems almost dismissive of the danger. Instead, it’s galvanizing him to act.

For years the Queen has been seeking aid from the neighboring elves of Dornig, but talks have gone nowhere. The Archduke suggests that they look north instead. The reaver dwarves from across the sea were enemies of Krakova for years. But when the undead attacked, the northern city of Johzt welcomed the dwarves, and they in turn kept the undead at bay. The city represents a successful holdout within the war-torn region.

Johzt is also the location of the Temple of Sif, where loremaster Trehild suggested they journey to to learn more information about the Holy Robes of Sister Adelind, a rumored artifact with powerful anti-undead capabilities. The party would certainly like to get their hands on such an artifact before the Imperium does.

With their goals aligned, it’s easy for the party to agree with the Archduke’s request to escort him northeast, into what is now the  Greater Duchy of Morgau — territory ruled by vampires.

For bringing them critical information and helping them at this juncture, the party is rewarded. The Queen offers several hundred gold (which the party uses to purchase a crapton of healing potions!). The lord of the manor, Duke Kavanto, offers his old Cloak of Protection (Torben), and Zosia gives Alaric a holy book of Wotan with a special herb inside — a symbol of the court that could open doors to the right people in the old country (or doom them to the wrong ones).

The Queen also presents a Vial of Sunlight to Lucian, a magic item that radiates real sunlight when opened. It helped them escape from the vampires a decade ago, and she’s hoping it will help the party now.

Laden with new purpose and shiny loot, the party prepares to head out yet again on a big journey north. This time however, they have a different option — the fey road.

Fey roads are built on ley lines throughout Midgard, offering a super-highway of fast travel by entering the shadow realm.

A fey road happens to exist here at the castle grounds, with the exit over 250 miles north in an elven ruin near the edge of the Tomierran Forest. A two and a half week journey would be shortened to about four days on the fey road. From there, it would be about a week’s travel to Johzt along the northern coastline.

The Archduke insists on taking the fey road, and the party agrees. As a shadow fey, Ry doesn’t need for the Duke to explain how the magical entrance needs to be opened, and he takes point during the journey.

The party spends a few days in town gathering supplies, and the Archduke hires a few guards and a scout, before entering the sunless realm.

The shadow realm is creepy and unsettling, with gnarled trees, inhuman voices, and looming shadows all around them. Ry knows their best bet is to stay on the road at all times, yet they’re shocked when a mysterious rider gallops past on an undead unicorn. The discordant fluting from its hollowed horn causes Torben and Stan to relive their traumatic pasts with vivid nightmares when the party camps that night. 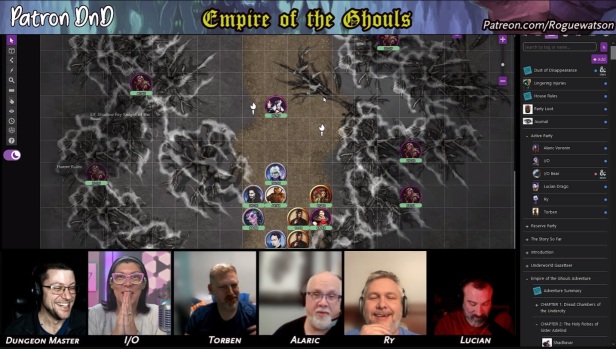 On the third day, the road suddenly bends and twists into darkness, and a figure steps out onto the road. She’s a shadow fey, and she seems to exert some sort of control over the road itself. She’s offended by these “lightbringers” in her realm, mocks Ry for traveling with them, and demands tribute from the group before letting them past.

Some of the party are ready to throw down, including both dhampirs, but Ry maintains a cooler head in spite of the insults. He’s unable to recall any precedent he could use, but instead offers his Cloak of Elvenkind as tribute, much to the shock of the rest of the party.

The shadow fey greedily accepts, and waves for her hidden forces to stand down. She lets them pass, fixes the road, and even warns of dangers to come when they reach a narrow cave.

On the fourth day the dark road narrows into a darker tunnel. The party cautiously creeps forward through the tight spaces, but half are surprised when half a dozen Shadows emerge through cracks in the walls and attack!

Lucian wastes no time, and opens the Vial of Sunlight. The Shadows are immediately affected by the radiant light spilling out, weakening them as they continue to weaken the party with their strength-draining attacks.

I/O shifts to bear form and takes several nasty hits, yet her bear strength proves formidable, alongside Torben’s. One of Avgost’s nameless guards goes down, as does the hired elven scout, succumbing to necrotic damage from the Shadows.

Despite his appearances, the Duke is a decent swordsman, and unafraid to defend himself against these threats, helping to rally the others with a bolstering war cry.

Soon the last of the Shadows falls. Torben gingerly picks up the bodies of their fallen comrades as the party exits the tunnel. They pass through archways made from two intertwining oak branches and step onto a stony plaza, lit by a moonlit sky.

The plaza is decorated with statues of humanoid and bestial creatures. Welcome to The Stone Galleries!

Support my channel via Patreon! Upgrade to the Platinum level to join in this campaign!