It’s entirely possible to over prepare for a D&D session. This produces the opposite effect of the phrase, “Can’t see the forest for the trees.” Instead you’re so consumed by the entire forest, you skip over trying to plant and nurture individual trees.

This past week I think I spent more time on D&D than anything else. My party had recently returned to Red Larch after a very lengthy stay within the temples of elemental evil. The sojourn encompassed three dungeons, at least two Long Rests, and over two months of real time.

So I had a bit of a backlog with side treks and extra events that were happening around the Dessarin Valley. 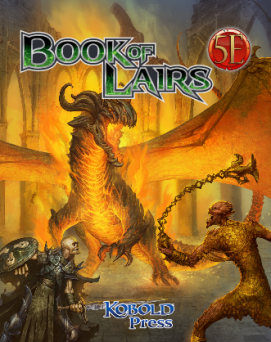 I also wanted to include even more extra content. I recently received the Book of Lairs book from Kobold Press’ Tomb of Beasts Kickstarter (the ToB is also fantastic) and found a dungeon that I could easily include in our current campaign as a Side Trek.

On top of that I found another mini-dungeon that would work wonderful for my campaign with a few tweaks, from Nerzugal’s DM Toolkit. That’s on top of a Side Trek included in the campaign that I was adding.

So that’s three Side Treks I built this week. Then I noticed my party would be traveling to Westbridge, and realized that “Princes of the Apocalypse” includes a neat little mini-scenario that occurs when they travel there in the latter half of the adventure. Four – four new things!

It was overwhelming but I got it all done. I could’ve easily just picked one and dove deeper into it. But I enjoyed giving my players the option of picking where to go and what to do. I wish I hadn’t done the Westbridge event at the last second on Sunday – as that’s what we ended up tackling this week.

When it comes to returning to town, I know how my PCs like things. They want to react to events, not necessarily explore on there own. I had a ton of scenarios written out to do just that:

Both the Paladin deserters quest and Reeds quest would take our heroes North to Westbridge, so that’s where they ventured. 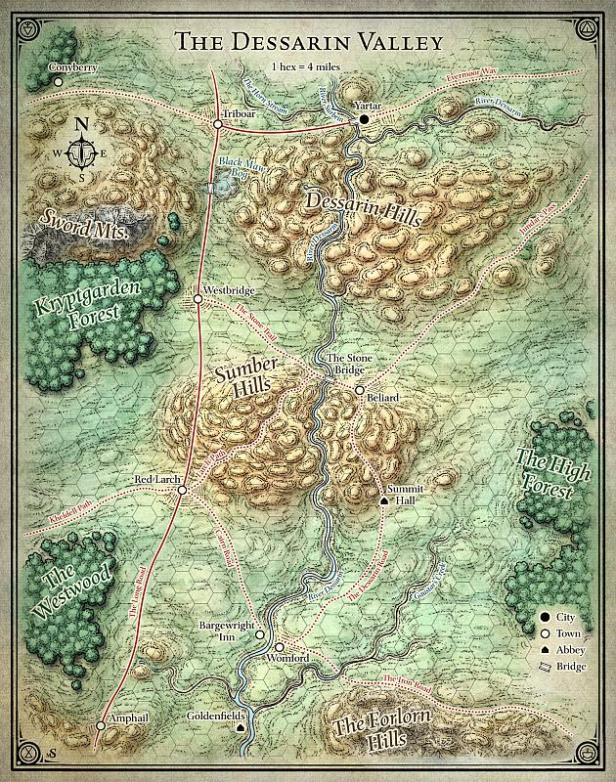 I had literally just been flipping through the “Princes of the Apocalypse” book on Sunday and found the Council of Despair section. It’s meant for a bit higher level but with the party most likely traveling to Westbridge, how could I not run it?

The Council of Despair is a small, simple scenario where a small entourage of the Black Earth have begun preaching to the citizens of Westbridge. They’ve suffered a devastating Earthquake and are desperate for help. Our heroes arrived, learned of all of Westbridge’s troubles from the Reeds quest-giver, and immediately strode out to meet the cultists.

The event in the courtyard was mostly for role-playing, and Kalinaar played the part of the fiery zealot quite well (with Talus acting as his magical make-up person). Eventually the cultists came to blows but quickly went down.

All the bad guys were holed up in the inn. I wish I had planned this encounter out a bit better instead of last minute. I reused the Inn map from our previous Hell Hound encounter in Red Larch (Fiery Fangs).

Kethra used Disguise Self to pull off the old ‘hey drink this totally not poisoned wine’ gag against some hobgoblin guards. It was effective but she was stymied at the front door, despite a fabulous Southern gentleman accent.

Kalinaar opted for an exciting entrance by leaping on the roof and going around the back. Here I wish I’d thought this battle map through a little better. I did have the hill giant asleep in the kitchen, and Kalinaar was able to approach everyone from the back end.

Talus launched a Fog Cloud into the Inn and the fight was on. Team Shock and Awe, heh. 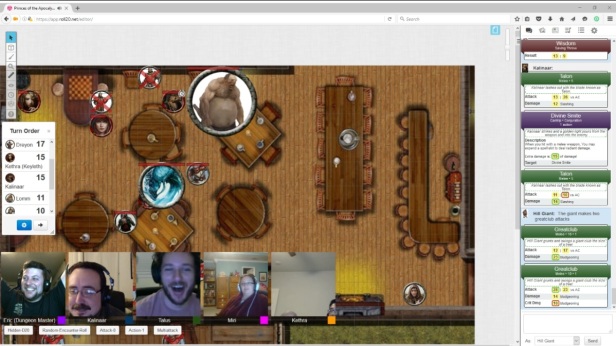 I have a bad habit of underestimating my PCs. According to the handy Kobold Encounter Builder, the total strength of a Black Earth Priest, Earth Guards, hobgoblins, and a hill giant was a Deadly fight for 4 level 7s. I decided to stagger the hill giant by having him asleep in the back (as Kalinaar discovered) and separated the hobgoblins – 2 outside (who were slain by Kethra) and two upstairs who joined the fight later.

But I forgot that a well-rested party is a force to behold. The main forces went down with nary any problems. It wasn’t until the hill giant arrived that everyone started freaking out, much to my devilish satisfaction.

The giant is a simple brute that hits really hard and has a ton of HP. It’s basically an ogre, but about twice as big. It carved large chunks out of Kethra and Kalinaar but a hasted Kalinaar did 50 HP of damage in one round, and his goose was soon cooked.

Had they been in the middle of a dungeon this damage and drain of spells and resources would’ve been devastating. But here in a literal inn the party can unleash hell a little easier.

I think it makes for a nice balance. Tempering your powers to outlast a dungeon is an interesting challenge, but shouldn’t be the only method and type of encounter. Being able to hit the nitrus in a big fight is certainty fun too.

This session was a whole lot of role-playing and exposition with only a bit of combat at the end. The PCs proved themselves the awkward anti-heroes they are after Talus cast Animate Dead on a dead cultist in the middle of the crowded town, and Kethra tried to pickpocket a commoner. But in the end they saved the town.

From here they have several different side treks to explore that should offer some fun diversions from our lengthy elemental cult excursions. Oh, and they gained enough XP for Level 8!