Back into the sprawling elemental dungeons we go, this time going deeper beneath the Air temple.

There’s a lot I really enjoy about “Princes of the Apocalypse.” But if it has one glaring weakness, it’s that it quickly becomes a nightmare to run as a DM due to the interconnected mega-dungeons.

A clear theme in the adventure are the elemental cults and how they work with and against each other. This is reflected in their physical proximity to each other, with dungeons often leading into another cult’s territory, or deeper and deeper into a sprawling mega-complex.

My players have expressed concerns that it makes layouts confusing going from one dungeon to the next. For my part as DM it often becomes a stressful chore trying to figure out where my players will go and what all I need to prepare.

In this week’s session, the party decided to head back beneath the Sumber Hills to explore the one spot they left untouched in the Air Temple – the giant underground pyramid. They hoped to find Miri’s mother. It wasn’t going to be that easy.

Well, getting there was easy at least. I even told my players that I’m mostly skipping over random encounters at this point. The campaign book has lots of nifty side quests and scripted events that happen throughout the adventure. I feel like just straight-up random overland map encounters would mostly be a waste of time.

That’s not to say I’ll never use them again – especially if I come up with a neat story reason. But the party does appear to be mostly fast-traveling at this point.

So after some pithy words to the poor folks of the mostly destroyed town of Red Larch, we packed off our bags and headed back into the Air Temple.

I was thinking my players might tackle the last side quest I’d given them: the nearby dwarven shrine. But Miri’s mom had been captured for quite awhile, and my players felt like they left the Air Temple unfinished.

I was not about to leave the leader of the Air cult simply twiddling her thumbs in the middle of her now near-empty dungeon. Thankfully the campaign book comes through once again with: “if the players do things in this order, make these changes.”

So instead of finding Aerisi in the old dwarven throne room, they found a demon she had summoned instead. The Vrock was a pushover to the well-rested party. But I decided to include some story-telling as a payoff for going there. I had Aerisi “speak” to the party telepathically, mocking their progress and teasing her plans.

I had Talus roll an Arcana check to trace the signal. Like the magical version of hacking, or something. I let them know that Aerisi was “in the caves you were in before.” I thought it would be crappy for them to journey here, find a random demon and no Aerisi and have no direction on where to go next. And I know my players, they like the direction.

They also like to explore uncharted territory when it’s presented. I only recently (a few weeks ago) realized that the shaft in the pyramid goes to [redacted] rather than [redacted]. I’ve read through the book several times and even I get confused on how everything connects together!

My players couldn’t resist jumping down the air shaft, and thus found themselves in an entirely new area. One with howling wind, dark caves, and a blood-red air elemental churning up dozens of bodies.

I would not get a single turn with the air elemental. 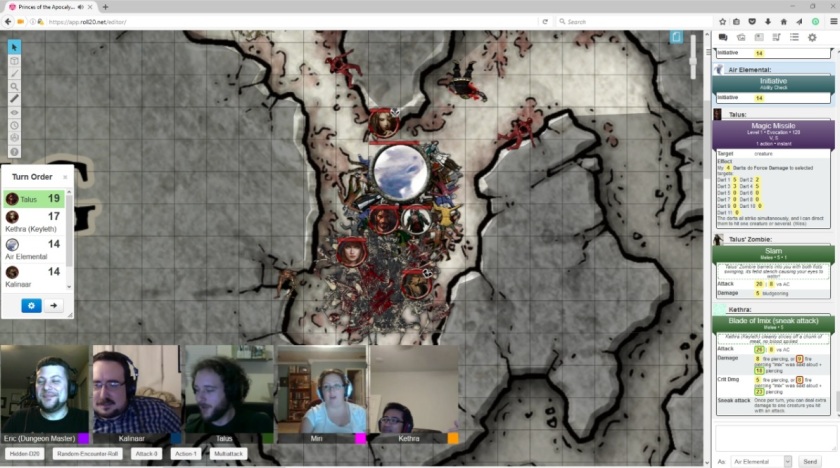 Kethra had her revenge for last week’s bad rolls, doing around 60 damage in a single strike on two different occasions. I’ve already learned the lesson that a single anything is just not going to stand up to these PCs unless they’re substantially drained of resources. And this week’s encounters were filled with big, but single, baddies.

The windy caverns represent yet another giant dungeon, though much of the area the PCs ended up exploring is more aesthetic than dangerous.

I’m glad I used Roll20’s dynamic lighting to block off cave paths to prevent my players from moving their tokens around and seeing everything too quickly – a big problem I had in the Phandelver dungeon. This time I made my players choose a path first, then “opened” the doorway and let them proceed.

For those following along with the campaign book, they explored East, then made a circle South and West, before going East again. From N3 to N8, N5, N4, and finally N7 in a crazy zig-zag pattern. N5 had the destroyed remains of the svirfneblin (how the balls do you pronounce that) town, with a handful of specters that got in some surprisingly decent hits before going down.

Things got interesting when the PCs found the chasm in N4, and multiple paths leading beyond. Kalinaar used his boots to jump (even though it’s only 10 feet across). The chasm reacted, shooting up wind before dying back down. The party briefly wanted to split up, leaving Kalinaar over there and hoping the paths meet up again.

The stalwart, unflinching Paladin suddenly grew anxious, and refused to leave the party, jumping back over. Deeper into the caves the party went, turning North to N7, and the tortured prisoners of a nycaloth demon.

The demon is large and powerful, with a nifty teleport attack and some innate spellcasting. That means he survived two rounds instead of one (*grumbles incoherently*). 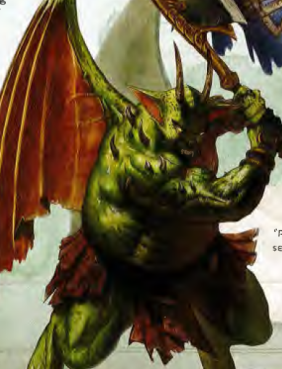 The nycaloth did a ton of damage to Miri in a single round, then teleported to try and take down the wizard, whiffing bad on the damage roll.

After that the party simply surrounded him, and another 60+ damage sneak attack from Kethra did him in. WHY DID I GIVE HER A FLAMING SWORD OH GOD.

The party looted a magical necklace of beads and began to treat the wounded, possibly trying to get some answers out of them. At this point we had made it a solid three hours and covered a ton of ground. I certainly did not expect them to be in the middle of [redacted] this early on, but I did prepare for it just in case.

I mean hell, the damn shaft is right there in the middle of the pyramid, and with Aerisi gone – who wouldn’t jump down?

Those that know the campaign will probably be wondering: “Wait, if the party makes it to [redacted] before [redacted], how will you handle that?” The answer is honestly, I don’t know yet. I’m going to try and decide what’s best for the story. I’m worried that the latter parts of this campaign will involve some lame backtracking and hopefully I can find ways to cut down on that.

Unfortunately we didn’t end it on a great stopping point, being in the middle of this dungeon. That’s normally not a problem but this week is special. We’ll be taking a one week hiatus from our “Princes of the Apocalypse” campaign due to one of our players being out of town for a solid week.

This is the first time we’re skipping an entire week – but fear not! One of my players, Chris (Kalinaar), has expressed interest in DMing. We decided it would be a good trial run to DM a one-session adventure. I get to be a player again – woo! We’re also inviting another player’s wife (Talus) to come join us and make us a foursome again.

We’ll be playing pre-gen characters at level 2, and hopefully completing a mini-adventure in a single session. This adventure will be recorded and uploaded on my YouTube page as normal – but you’ll get my Player perspective instead of DM. We’ll return to “Princes of the Apocalypse” the following week.