After rescuing a shipwreck survivor at Dungrunglung the party travels west to search for survivors at the Wreck of the Star Goddess.

From Dungrunglung the party had gained fancy new magic items and two new allies, including skyshipwreck survivor Oloma. They traveled west from the Aldani Basin back into the jungle to find the Wreck of the Star Goddess, besieged by undead.

After the big fight in Dungrunglung my PCs were looking awful thin. Out of hit dice and spell slots they were begging for a long rest. In our Tomb of Annihilation campaign, a long rest is a precious rarity in the jungle, but they hadn’t had one since leaving Camp Vengeance half a dozen sessions ago.

I did have one hostile encounter planned as they traveled, a follow-up from the grungs. The grungs sent out a sneaky group to try and steal back the Circlet of Blasting the PCs had taken from the king. After rolling a d4 to determine which guard shift they appeared in, Khaless rolled a high Perception check and spotted them early. She had Vorn rouse everyone while she turned a proverbial security light on them via Dancing Lights.

The grung scattered and fled. They were all too aware of the PCs’ grung-killing prowess and certainly didn’t want to fight. Theft averted!

The other nice pieces of loot from Dungrunglung (which I added) were a Figurine of Wondrous Power that could transform into a Giant Frog, and a Staff of Thorns, a +1 magic quarterstaff with a bunch of plant-themed spells and daily charges. 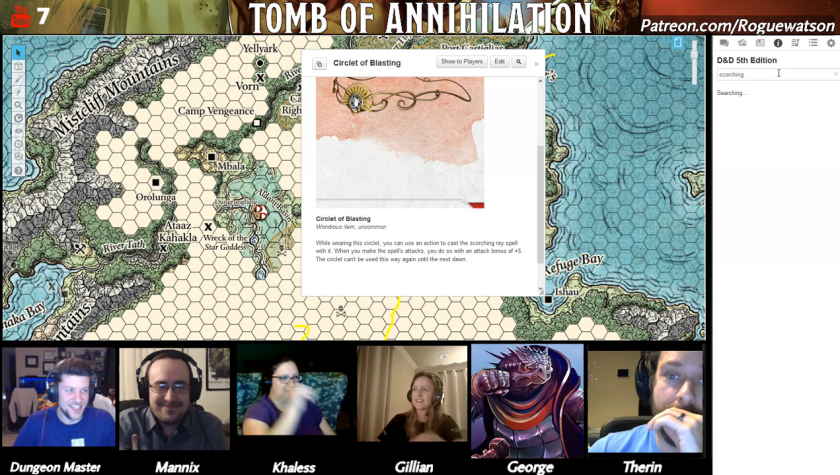 The next day they crossed the river and met a surprisingly friendly family of lizardfolk ranchers. I pulled out my southern fried comfort accent to have a fun little chat with the bemused party. They got a bit of gossip as I teased a Yuan-ti group heading to Orolunga, and Artus possibly heading away from there (after the Winterscape event teased him heading there).

Mostly it was a chance for some light role-playing and to give the players a much needed Long Rest. Hadrosaurus steaks for everyone!

From there the rested PCs, and their veritable army of NPCs (seriously they’re up to 6 now??) arrived at the Wreck of the Star Goddess.

The included map only features the wreckage itself, suspended dozens of feet in the air and broken apart into three chunks. But there are ghouls roaming around underneath. So I added another map for the ground level.

With the amount of NPCs they have, few straight-up fights will be meaningful. They used Vorn as a distraction while they sneaked around and unleashed a powerful surprise round against the few ghouls and zombies. More ghouls appeared but were quickly dispatched.

During the fight the party heard weak voices calling out from the treetops. There were survivors still stuck in the wreckage. But something large was heading there way. Multiple somethings. A trio of undead, four-armed girallon zombies lumbered high up in the trees, motivating the PCs to get up there and help.

If there’s one thing this party excels at, it’s climbing. Therin could use bear form, Gillian her Ring of Jumping, and George his Gloves of Climbing. Khaless climbed up a grappling hook thrown by Vorn. All of them reached the top just as the undead beasts made their way to the wreckage, making this rescue mission all the more perilous.

One thought on “Tomb of Annihilation Session 25 Recap”