In the main temple chamber of Orolunga we found a captured naga – the oracle, and the remaining Yuan-ti forces.

In the main temple chamber of Orolunga they found the oracle, a guardian naga. The naga had been attacked and captured by the newly arrived yuan-ti. It was up to our heroes to defeat the snake-folk, rescue the oracle, and get some much-needed answers.

NOTE: My version of Orolunga is partially based on the Viper’s Pit dungeon designed by JVC Parry on the DMs Guild.

When the party first entered the temple chamber at Orolunga, they were treated to a cutscene between Yahru, the leader of this yuan-ti expeditionary force, and his boss, Ras Nsi, via a magical projection. Yahru was reporting his success at capturing the naga, despite some heavy losses, but the arriving party threw a wrinkle into his plans.

Mannix threatened to poke the wyvern currently nesting in the southern half of the temple and try to bring it over, but Yahru sneered at the threat, demanding they throw down their weapons and walk away. The party refused and the fight was on.

Within the temple chamber a pair of Broodguards held the guardian naga in place, including an iron band over its mouth to prevent spell casting. A pair of purebloods had blows drawn ready to fire, while a pair of enslaved knights (with AC 15 instead of 18, no heavy armor in the jungle) attacked at the entrance. My ace in the hole was a trained basilisk who would come around the corner and wreck havoc.

I (and many on this week’s Crafting Annihilation) thought this would be a very tricky fight, potentially catastrophic if the PCs fail the saving throws for Suggestion and Petrifying Gaze.

Instead  all the saves were made and the battle ended up being a bit of a push-over, but still featuring a lot of fun tactical strategy and creativity.

The PCs kicked my butt on initiative, which helped them a lot. Therin charged in with his bear form, twice attempting to knock into all the yuan-ti on the raised platform in an attempt to free the naga, which was a very solid, and brave, strategy. Mannix threw his frog statue up to help him, which was hilariously effective almost every round (more so than Mannix himself!).

Gillian would take the brunt, if not the entirety of the damage from a knight and the basilisk, nearly going down in the fight (unless you count Therin’s bear form). Khaless and George would take care of the front-line fighters, with George at one point throwing one of the knights down the hallway pit into the first floor, after the knight nearly did the same to Khaless.

Therin’s tanking skills worked admirably, especially as he was the primary target of the yuan-ti’s Suggestion spells, and easily shrugged them off with his +6 WIS saving throw (though using Inspiration once to do it). But the most effective move was George using his Vine Sword to drag the basilisk down into the snake pit, taking it out for a solid round before it could climb back up. George would then drag it down again, only to leap it after it! 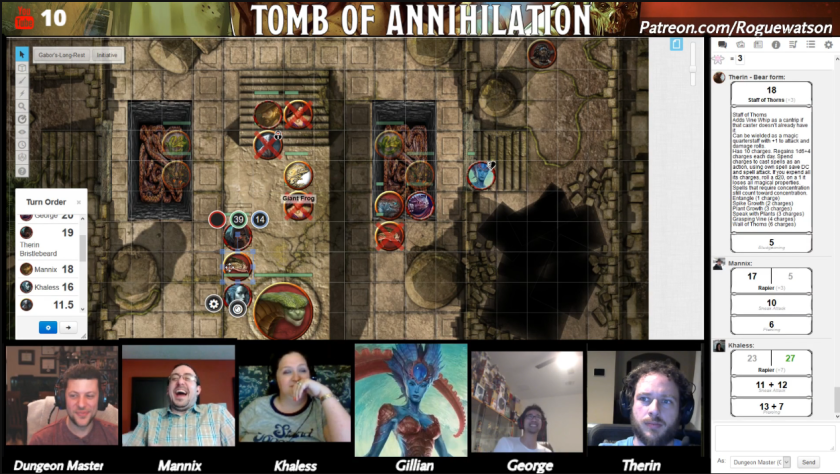 The combined efforts of Mannix, Mannix’s frog, and Therin’s constant bear attacks finally freed the guardian naga, who responded with a very powerful Flame Strike spell to kill the purebloods, then spitting poison at the knight who finally made it back up the stairs. I wanted to reward Therin for working hard to free the naga and show off its power.

At the end the basilisk was the only thing remaining, and half the party jumped into the pit after it, which was now full of petrified snakes. Not at all how I thought the fight would go, but still a lot of fun!

With the enemies defeated the party was able to loot a Dagger of Venom, a handful of poison arrows, and identify the cloak Khaless had snatched from the mummy’s tomb last session as a Cloak of Protection.

They also each received a magical charm from the naga. This was a fun idea I had where each one of them got to choose from a list of one-word things they could desire, such as Hope, Freedom, and Power. They could only choose one and wouldn’t know what exactly they were getting until they all made a choice and whispered them to me.

For the record, here were the choices and what they chose:

*Gillian’s player wasn’t here so I ended up rolling a d8 after the rest had chosen to determine her choice. Which I’m just now realizing they were 9 choices left, not 8, oops!

Each charm (DMG 228) is a magical item that bestows a spell that the PC can cast three times, with no recharging. Spells are 3rd-4th level and are either buffs or summons. Answers provides Divination. Power is Elemental Weapon. Freedom grants Freedom of Movement. Understanding is Tongues, and Death is Animate Dead.

Can you guess what the other spells are?

This was a really fun reward that my PCs enjoyed, and I loved hearing their debate over which to choose. They also got some more information on the yuan-ti, Ras Nsi, and the death curse. They learned the location of Omu, and that they need to get to a tomb underneath it. They also learned that Ras Nsi and the yuan-ti help guard the tomb, but maybe he could be a potential ally, as he’s also affected by the death curse, and he was capturing the oracle to try and find out just what the hell Acererak is up to.

After all this the PCs are ready for a long rest and a level up to five, though first it sounds like they want to take on the wyvern that has made a nest in the southern half of the second floor. We’re not quite finished with Orolunga, but the PCs have learned much, and finally have a solid lead on the main quest.