We battle pterafolk and gravity as we grab the loot and make our escape down the rocky spire of Firefinger.

With advanced scouting and careful planning, the party kicked all kinds of ass in the climactic fight against the pterafolk atop the pinnacle of Firefinger. The real challenge was getting back down.

Last session we’d made it to the top of Firefinger with only a few bumps and bruises. Mannix devised a plan to trick some of the pterafolk at the top using a Silent Image of the aarakocra prisoner. It worked, with only the large scarred leader remaining, his back turned toward the stealthily approaching group.

He didn’t last long. As an assassin Khaless is horrifically deadly when she gets the drop on enemies, and she easily one-shotted the pterafolk leader. The others were able to kill another two pterafolk with long range attacks, leaving only three left at the top to retaliate.

The pterafolk hit hard but most had to spend all their movement just reaching the PCs, so grappling and flying off wasn’t in the cards in the first round. Unfortunately for me they didn’t survive a second round, with the PCs quickly taking them down with swords, arrows, and Therin’s thorn wall staff. 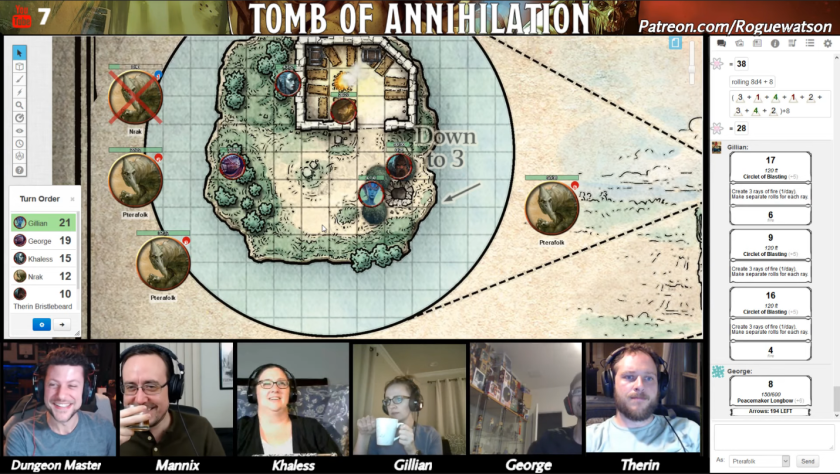 The party was free to loot the rewards before more pterafolk reinforcements arrived, gaining a decent monetary payout, some spell scrolls, and Azaka’s magical mask.

The way down proved more treacherous than the ascent, however, as now the pterafolk were alerted to invaders. With the use of ropes everyone could roll advantage on Athletics checks to climb down, and the DC was really low and easy – and still most people failed! Most of the party took a lot of bludgeoning damage as they fell down the rock chutes and ladders.

I had pterafolk attack when they reached the precarious outer ledge halfway down. Ironically the party easily dispatched them with barely a sweat, but climbing down the vertical cave tunnels proved disastrous. Both Mannix and later Therin would actually go down from falling, both suffering Lingering Injuries.

The pterafolk didn’t pursue once they reached the bottom, and Azaka was thankful for getting her mask back, which gives her control over her were-tiger form.

Bloodied and heavily injured the party put distance between them and the pterafolk and made their way back toward the rowboats. There they found a large group of Flaming Fist soldiers, combing the jungle in the name of the Lord’s Alliance.

The party’s previous run-in with the Flaming Fist didn’t go so well, and they certainly didn’t have a Charter of Exploration. Mannix tried to deceive them, claiming they had crash landed in the jungle from an airship, but the soldiers were interested in shaking them down for money and loot before they’d offer any assistance. The PCs, of course, weren’t going to have that. Roll for initiative! 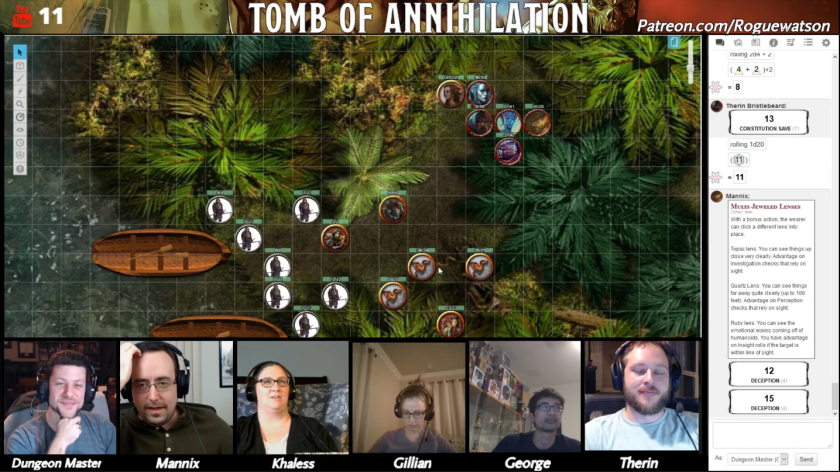 Once again Khaless saddled up to the boss of the group and annihilated him with a single devastating crit. She then rolled Intimidation to get the others to stand down. Half the guards dropped their weapons and ran – but not before they had perforated George full of crossbow bolts, nearly dropping him (3 hp left).

Therin summoned an Allosaurus while Mannix threw his giant frog figurine to create some meat shields between them and the soldiers’ trained deinonychus. The strategy worked, making the fight a lot easier despite their grievous injuries, not to mention a fully healthy and fully in control Azaka. From there it was a simple matter to clean up the few soldiers and beasts too stubborn to flee.

The mercs lie dead and the PCs finally earn a much-needed rest. They know the Steel Predator may still be hunting them, and they need to get back on the river and return to Port Nyanzaru. From there, it’s onward to the Brazen Pegasus as they take to the sea.

One thought on “Tomb of Annihilation Session 35 Recap”