NOTE: Technical difficulties resulted in the stream being split into two videos.

Thanks to Gillian’s Mad Monkey Mist-inspired delusion of flight, the party found themselves face-to-maw with a gigantic tentacled frog monster outside Kubazan’s Shrine. Enter the Froghemoth!

No, literally, enter the Froghemoth, the fat bastard loves swallowing PCs whole! Kubazan’s manifestation is a delightfully fun CR 10 boss monster with multiple +10, 20-ft long tentacles, a 20-ft tongue to reel people in, and a monstrous bite attack that can swallow a PC, rendering them blinded and restrained and taking constant acid damage. Delicious!

I had no delusions going into this fight that even a powerful creature is woefully weak by itself compared to a full party of PCs + NPCs. During Crafting Annihilation I debated on giving it Legendary Actions. I settled on adding a few swarms of quippers in the water to harass anyone who was grabbed by a tentacle. They lasted all of a round when Therin summoned his Wall of Thorns right through the water.

The Froghemoth boasted nearly 200 hit points, but only had an AC of 14 and a terrible +1 DEX Save. After a fun surprise round it began taking heavy damage from ranged attacks. Its first tongue attack missed, with Khaless succeeding on the DC 18 STR saving throw, but in its second round I managed to bite and swallow her, freaking everyone out.

George earned inspiration by using his teleporting Cape of the Mountebank to rescue Gillian from her tentacle embrace. Gillian then cast Polymorph on the Froghemoth – with Khaless inside! Mannix used one of his Divination Portent die to force me to fail, a solid strategy since the Froghemoth has a +9 CON saving throw.

I’ll be honest, I had no idea how to rule the monster getting Polymorphed while a PC was inside. I knew the rules behind Polymorph: it changes into the new form (Gillian chose a seahorse) until its new hit points are reduced to zero, in which it reverts back. 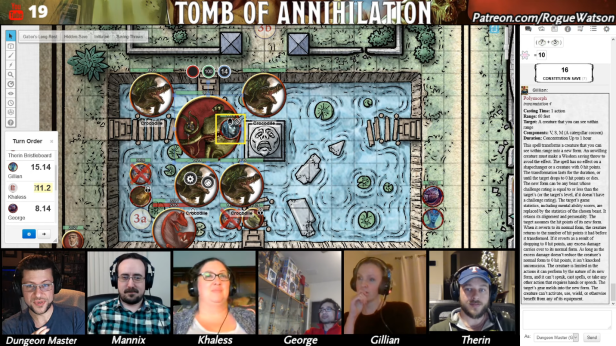 My ruling was this: the beast starts to shrink, thus freeing Mannix, Therin, and Dragonbait from the tentacles. As it does, Khaless uses her action to try and do something to escape (she elected to slice and dice). With disadvantage she missed hitting it. However, its shrinking body crushes her, and her presence damages it in turn. I used its tentacle attack for the damage (~20) and applied it to both of them. That damage also triggered the monster’s gag reflex, but it actually succeeded on the DC 20 CON saving throw to keep its snack down.

The result was the beast taking about 20 damage, the tentacled folks being released, but Khaless still stuck inside, worse for wear.

Therin dropped his Wall of Thorns to summon a foursome of crocodiles to surround the Froghemoth, a solid strategy for a relatively low AC beast. The crocs were effective, once again triggering the monster’s gag reflex. This time it failed the save and Khaless was unceremoniously regurgitated.

The Frogehmoth only has a 2 INT, so it began thrashing out at the crocs, killing half of them – but most importantly not devastating the weakened PCs. The party was able to muster their forces and deal several nasty blows to the beast. It finally fell beneath the murky waters after a crossbow bolt laced with Gillian’s Psychic Blades. The party instantly collapsed by the pool for a Short Rest, exhausting most of their hit dice (cue DM cackling).

The beast had no treasure, but a nearby statue held a key inside of its mouth. We found the mouth again on the door to the shrine, with a cryptic inscription suggesting the PCs leave as much as they take. Mannix dropped the key inside the mouth, and the doors opened.

Inside the shrine was a 30-fit spike trap, with wooden beams jutting out around the perimeter, leading to an alcove on the far side with the pedestal. Khaless eagerly began rolling Acrobatics checks to jump from beam to beam, rolling 20+ on every roll and easily making it to the far side. She swiped the puzzle cube, which triggered the weighted plate underneath to pop up. Orvex shouted into the small shrine about the inscription but it was too late; poisonous gas began filling the chamber as the doors slammed shut.

Only Khaless and George were inside, and both made their first CON save against the gas. Khaless effortlessly danced her way back to the entrance while George tried to pry the doors open.

Outside Therin-saurus used his head, and rammed into the doors (ouch) while Mannix used his head to produce a crowbar and use Therin-saurus’ strength to pry the doors open. The trapped pair both rolled crit successes on their CON saves, and the doors pried open just enough for them to spill out.

Continuing back to the main street of Omu, the party spent some time searching the nearby buildings, using my custom search rules. This time they discovered a garden with some menga leaves, and further north a pair of valuable Omuan artifacts.

They continued heading toward the amphitheater, where George wanted to find the King of Feathers, but they passed right by another shrine. Orvex identified it as I’Jin, the wily almiraj. This shrine had no such monsters guarding it, just burrows of harmless bunnicorns. The inscription said something about the path least expected. The party tried to find a different way other than the front door, before finally relenting.

Inside they were met with a grid floor with animal faces. I let Orvex explain a little more of I’Jin’s words – specifically always changing course. The PCs correctly deduced that they shouldn’t step on the same tile twice. Mannix also detected an aura of abjuration around all the almiraj tiles, and decided they should avoid them just to be safe.

Some of the PCs could simply leap across – George with his 18 STR and Gillian with her Ring of Jumping (who still thought she could fly!). Khaless attempted the floor puzzle and managed to avoid setting off the trap by carefully stepping on a different animal face each time, and Mannix could simply follow, with Therin-saurus and his remaining crocodiles remaining outside, smoking and playing cards.

The floor puzzle was a piece of cake, the labyrinth not so much. The party immediately got lost, turned around, and split up, much to my absolute delight as they began setting off the blade ceiling traps. I had placed door icons on the map to tempt them into the proper places, and it worked beautifully. I think they set off nearly every single blade trap before they made it to the puzzle cube room in the back.

The cube itself wasn’t trapped, and the party carefully made their way back out. Three shrines down and three cubes acquired. Now, on to the amphitheater!

One thought on “Tomb of Annihilation Session 60 Recap”