We celebrated hitting 2,000 subscribers on the channel with DMs Guild giveaways throughout the live stream!

After Papazotl’s shrine the party had only one shrine left, Nangnang, home to the grungs of Omu. But the yuan-ti were after the shrine as well.

The party made their way through the flooded region of Omu in the northeastern corner. Unfortunately for them, waist-high water surrounded by buildings is the perfect ambush spot for a race of imperialists who can transform into snakes.

The yuan-ti had set up an ambush for the approaching party. Four malisons armed with poison-tipped arrows split between two different buildings, along with a pair of malisons transformed into snakes with several swarms at their disposal in the water in melee range.

Unleashing viable tactics from intelligent enemies is a tool I haven’t had a chance to use too often in this campaign, and it proved particularly painful for the PCs when I rolled hit after hit on my +4 attacks. The bow-wielding malisons could each fire twice, and with their poison did over 10 points of damage on average with each hit. 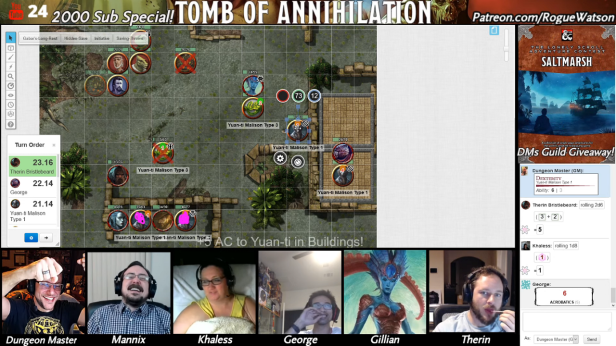 Since one of our players couldn’t make it, I used the opportunity to temporarily write them out of the encounter the same way I did for one of the NPCs – by having them dragged underwater by unseen forces (to compensate, the yuan-ti would not get a surprise round).

However, after dealing scary amounts of damage in the first round I quickly realized that the party would be slaughtered, and let Gillian resurface (and Mannix’s behest) so she could properly join the fight with healing and stunning spells. I did the same with Artus and Dragonbait, letting them enter the fray almost immediately. NPCs have been a great way for me to alter the balance of power on the fly, and the PCs needed all the help they could get.

I also screwed up the dynamic lighting on this map, which caused an endless parade of confusion on what the PCs could and couldn’t see. I wanted the setting of an Old West shootout with the yuan-ti hiding in the buildings firing their bows out of windows, but forgot to put breaks in the walls to represent the windows – oops!

The snake-morphed yuan-ti in the water had to be dealt with first, which kept the PCs in an exposed position and taking heavy damage. Both George and Gillian would go down in a hail of arrows while the rogues rushed to the southern building, with Khaless leaping inside to drop a shredder grenade, and Mannix heating the metal of one of the malison’s swords.

The yuan-ti in the second story of the eastern building proved more meddlesome. Therin would heal Gillian and Gillian healed George. George stealthily swam towards the building and up the stairs, while Gillian stunned the pair with Hypnotic Pattern. George combo’d it nicely by disarming both of them, and dropping one out of the second-story window.

Therin used Flaming Sphere to slam into the yuan-ti while withstanding multiple arrow attacks with next to no hit points remaining.

Once the PCs were in melee range of the archers, the yuan-ti knew their advantages were lost. They had no interest in a straight-up brawl, and used their snake-morphs to slither away where they could. Had they fought to the death it would likely have been even deadlier for the near-death PCs!

The battle was over but the war waged nearby. They could hear the sounds of an attack in the direction of Nangnang’s Shrine. Mannix used his owl familiar to scout the area, seeing another detachment of yuan-ti forces assaulting the grung on the shrine, cutting them down with swords, bow, and a spellcaster with snakes for arms. The grung attempted to retreat into the shrine while the yuan-ti started to breach it.

The PCs had to make a decision. They were bloodied and weakened from the ambush, but they didn’t want the yuan-ti to get their hands on another cube. After some deliberation, they agreed to move in using Mannix’s Dust of Disappearance, giving them the perfect stealth opportunity for a huge ambush of their own!

They caught the attacking yuan-ti completely by surprise, Khaless’ assassinate ability alone doing 40 damage in a single turn! I rolled in single digits for initiative, meaning the party went twice before the yuan-ti had a chance to react, killing the poor spellcaster (I used the yuan-ti pit master stat block from Volo’s).

Again the yuan-ti had no interest in a straight-up fight with the party, even weakened as they were. I was also keenly aware of the session time, and combined with the giveaways we were doing, we had already reached three hours of play time. After the PCs’ massive ambush, the rest of the yuan-ti swiftly retreated.

The grung tentatively opened the doors, preparing to defend themselves against this new threat. But with the help of the captive grung prince and Orvex’s translations, the PCs convinced the grung to hand over their precious treasure. I modified the puzzle in the shrine so that the solution was a necklace the grung prince wore. The grung begrudgingly allowed the PCs to use the necklace (a piece of the spear from the Legend of the Nine Gods) to open the back doors in the shrine and acquire the puzzle cube.

The party has obtained their fifth puzzle cube. The Red Wizards have three, but Ras Nsi has one. Zagmira contacted the party to congratulate them, and told them to meet her spy, Ishmakahl, in the outskirts of the Royal Palace, and they will get instructions on how to infiltrate the yuan-ti temple. She teased that not everyone is going to like it…

One thought on “Tomb of Annihilation Session 63 Recap”