We reach level 8, meet with Zagmira’s spy, and attempt the dangerous infiltration into the Yuan-ti temple.

Following the blood-soaked, combat-filled previous session, the party was due for a chance of pace. We leveled up to 8 with a feast and a long rest with the grung at NangNang’s Shrine, then it was onward to the Royal Palace to meet with Zagmira’s spy and figure out how they were going to inside the yuan-ti temple.

It was during the feast that Summerwise, Xandala’s pseudodragon familiar, showed up, confirming Xandala’s capture at the hands of the yuan-ti. Khaless warmed up to it, and now the party had two reasons to get into the temple.

As they entered the palace grounds they immediately spotted Ishmakahl, Zagmira’s spy. Ishmakahl was a shape-shifting doppelganger who had infiltrated the yuan-ti, reporting back to the Red Wizards where they could. I modeled them after Double Trouble from She-Ra (a gregarious shapeshifter), though I was annoyed my players kept referring to them as “he” despite my consistent use of they. 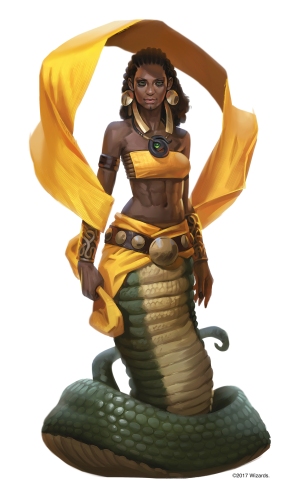 As part of their introduction I had Ishmakahl shapeshift into the two major players of the yuan-ti: the former Chultan warlord Ras Nsi, and the high priestess Fenthaza, and explained Ras Nsi’s recent illness. Ishmakahl could not fully assume either form because neither are fully humanoid – an important fact that may bite the PCs in the butt next session….

Then I dropped the bomb: Mannix and Khaless could pass for Purebloods but the rest would have to go in as prisoners. The party accepted this plan with a few modifications.

Therin could wild shape into a snake and curl around one of the fake-Purebloods. Mannix would utilize a very tricky, complex form of Silent Image to superimpose a captured Gillian and George stripped and in manacles, while underneath they would still have all their equipment.

The illusion would last only 10 minutes, require concentration, and rely on no one else touching them. It had all kinds of ways to go wrong, and I communicated as such through Ishmakahl.

The solution was that the PCs played everything very straight, letting Ish do all the talking when they descended beneath the palace and met with the door guard, Nath. The PCs even paid him the bribery without a single complaint.

I was incredibly nervous going into the Fane of the Night Serpent, as it has the potential to be a very different, interesting social dungeon, or devolve into a bog-standard beat ’em up, depending entirely on the PCs. It was definitely in my favor to let whatever goofy plan they devised work, provided they didn’t go out of their way to mess things up.

But hey, this is D&D. Almost as soon as we made it inside. Mannix was adamant about a plan to murder the high priestess and have Gillian take her form using her creepy Mantle of Whispers. But MoW only works on humanoids, and through Ishmakahl they should’ve known that the high priestess is a more monstrous malison.

Ishmakahl didn’t know how the gruesome details of their plans but was still distressed about killing Fenthaza, not wanting the PCs to do anything that would jeopardize their relatively cushy life in the yuan-ti temple. The PCs were temporary mollified as they strode past the guards, through the sacrificial chamber, and into the prisoner pits. 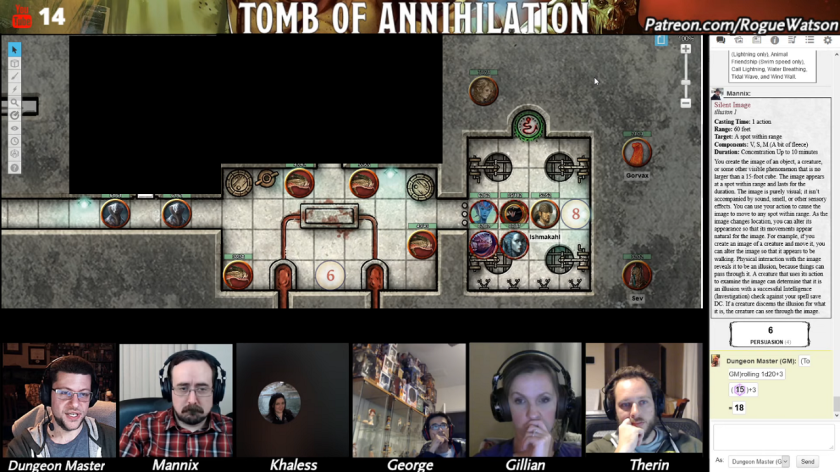 The pits held a mad pureblood, a captured firenewt, and a beleaguered Xandala. Xandala was in a vengeful mood to help with whatever crazy plan the PCs had, including using her last remaining 2nd level spell slot to cast Invisibility on whomever wanted it, throwing yet another bone for the PCs to gnaw on.

After some tense deliberation on what to do next, one of the guards approached the lingering party and demanded their appearance before the high priestess. They immediately had Xandala use Invisibility on Gillian, got her out of the pit, and the four of them (plus Ishmakahl) went with the guard to meet with Fenthaza: Mannix and Khaless disguised as Purebloods, Therin polymorphed as a snake, and an invisible Gillian. Poor George was left in the prison pit with Xandala.

All kinds of crazy shenanigans can go wrong (delightfully wrong and otherwise) from here on out. I’m equally excited and terrified to see them through.

One thought on “Tomb of Annihilation Session 64 Recap”