While Mannix was in the middle of his drug-fueled blood-ritual of transformation last session, the rest of the party fought their way through the Underground River to reach Ras Nsi’s throne room.

With the split party I was in a bit of a dilemma. Mannix and Khaless were attending the Yuan-ti Ritual of the Night Serpent, a large gathering of most of the temple inhabitants to celebrate the gory birth of new Yuan-ti. The ritual was supposed to last for several hours, and I had already montaged through it in our previous session, with Mannix emerging as a Yuan-ti Pureblood.

However, the rest of the party was keen on exploring the dungeon and making their way towards the throne room on their own. Normally I really enjoy when the party splits up as it forces different player characters into the spotlight. The problem was that two of the PCs were busy during this expedition.

I had several different solutions and ideas, but ultimately settled on having Mannix and Khaless stay at the ritual and let them control two accompanying NPCs with the other party: the sorceress Xandala and a young slave child named Khoti, who was showing them the path to the underground river, and warned them of a giant monster that lives there.

The river bank and rowboats were guarded by a foursome of broodguards. Therin attempted to parlay, but as George anticipated, the guards were in no mood for diplomacy when approached by someone who clearly wasn’t Yuan-ti.

A fight broke out, with Therin transforming into an allosaurus, George jumping into a rowboat and firing his longbow, and Khoti having to run back and grab a torch until Gillian remembered she had a Light spell.

The Therin-saurus became enraged early but there were plenty of enemies for him to focus on, and he effectively tanked the claws and bites of the broodguards while the others pelted the enemies from a safe distance. So far the best way to deal with an enraged Therin (due to his metal skeleton) is to let the enemies overwhelm his wild shape form until he reverts back to dwarf, and comes to his senses.

The fight was a bit more painful than we anticipated thanks to the PCs’ bad rolls, but afterward they jumped in the rowboats and headed up the river. They passed by a cave full of mushrooms, seeing a pureblood in a lab coat and a trio of zombies carefully placing mushrooms in baskets, but ultimately decided to skip it and keep rowing.

Further north they landed at a door in a cave wall. Therin listened and heard some sexy times on the other side. Khoti could confirm that this was probably the dormitory of the Yuan-ti, and most of them should be at the ritual. Once again the party decided to keep moving north to reach the throne room.

With the throne room nearly in sight the water churned violently, upending half the party from their little rowboats as the giant monster, whom I had teased a number of times at this point, emerged. A hydra! 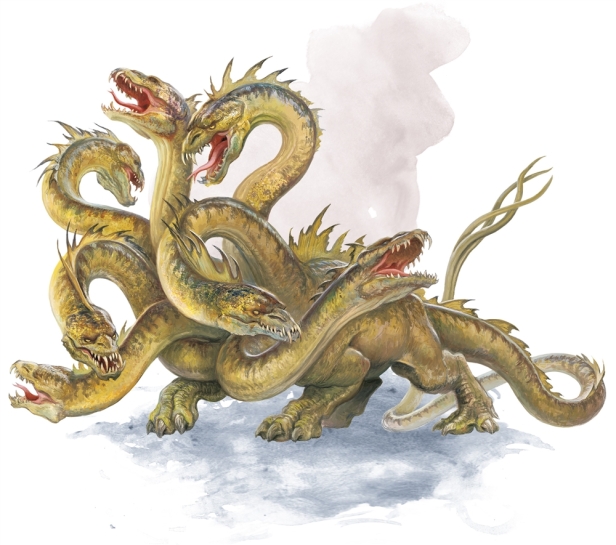 This was an interesting mini-boss battle, as the party was still split and a bit beat up from the previous fight. But hydras have one very big weakness – fire. As long as you deal fire damage, the hydra can’t benefit from its regeneration and head regrowing abilities.

On his second turn Therin would cast a Flaming Sphere at 4th level to deal 4d6 damage a turn, plus another 4d6 damage at the end of the hydra’s turn for keeping it close by. Combined with the hydra’s pitiful DEX save, it was a brutally effective maneuver.

The hydra was still able to get a number of solid bite attacks, but in classic hydra warfare, I split them up amongst all the nearby PCs. And is the case with any solo monster fight in D&D, it was quickly overwhelmed. The party clamored back in the boats for a quick short rest, finally syncing up to the end of the ritual.

With Ras Nsi retiring to his chambers, Mannix and Khaless were instructed by Fenthaza to carry the dead slaves who perished during the ritual into the throne room, where they could feed them to the hydra. Of course, none of them knew the hydra had just been slain!

In the throne room, the pair recognized Salida, the guide from Port Nyanzaru whom they had rescued from Orolunga. They were shocked to see each other, and Salida revealed that she had been Yuan-ti all along, a spy in the city. Mannix played it cool, explaining that he and Khaless had betrayed the rest of their party to join the Yuan-ti, and given his recent transformation, she believed him.

They hauled a dead body into the water, rang the bell, and began walking away. Therin was hidden in the water nearby. He dragged the body underwater and got their attention. Nobody really had a plan at this point, but Mannix was able to spot the secret door to Ras Nsi’s chambers. The room was full of guards, however, including Ras Nsi’s beefy bodyguard and a number of controlled ghouls.

The party decided it was time for an ambush. Mannix convinced Salida to inspect the hydra, which hadn’t yet surfaced. She did walked over to the riverbank. Therin popped out of the water to drag her under, but she resisted, just as Khaless was unable to stealthily sneak up on the nearby bodyguard.

The party is in the right place, but it seems their ambush may be falling apart just as it begins!

One thought on “Tomb of Annihilation Session 67 Recap”