No matter how well-constructed your fantasy world is, or how meticulously you run your RPG campaign, sometimes real life can get in the way. Maybe you don’t have enough time to prep, or a player (or you) can’t make the scheduled session.

I’ve been very fortunate to have a stellar group of friends and family that really go the extra mile in coming together every week and always having the best attitude for wanting to play and have fun.

That being said, I’m going through a crazy busy part of my life right now in selling our house and buying a new one all in the same week. Not trying to make excuses, but simply trying to explain why this video is several days late and much shorter than usual.

I definitely believe that what makes tabletop role-playing work, like live streaming or YouTube, is having a consistent schedule. So, my apologies, and hopefully we can get back to our regularly scheduled programming. Note that there may be some more hiccups and interruptions throughout the next month (our closing/moving date is early July).

(Fun Fact – I actually get a call from our realtor about 5 minutes into this video and received the news that our offer on the house we wanted was accepted. As one of my players remarked, it might be the first time someone bought a house during a D&D session)!

With Nettlebee Ranch completed I let the party return to Red Larch for a Long Rest, and continue back to the main quest of hunting the elemental cults. I did have fun creating some unique Uthgardt-themed charms as a reward for returning the treasure to the chieftain’s burial mound.

I’m leery of giving my players too many magical toys to play with, as they’re already fairly strong. Yet, loot is also fun. I told them that the more they actually used their limited items (potions, scrolls, charms) the more I would give them, to try and prevent hoarding. We’ll see how it plays. 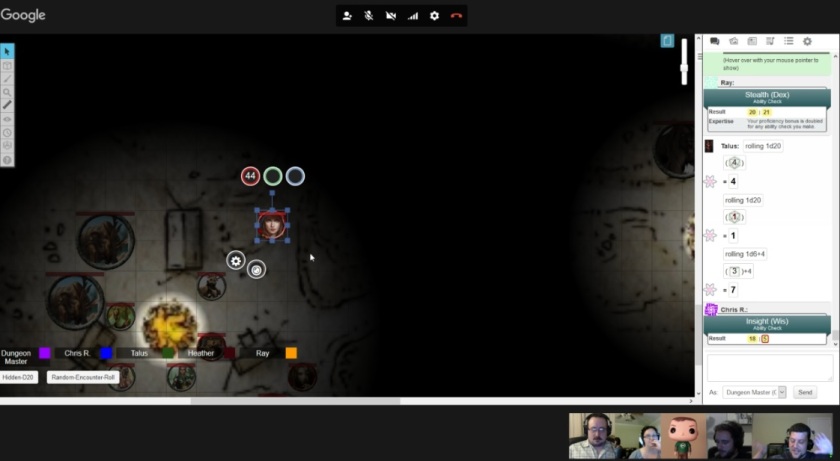 The party opted to travel to the Scarlet Moon Hall, where they’d heard of a group of druids trying to summon a ritual to combat the apocalyptic weather patterns in the region.

The arrived to find a group of friendly druids at the Southern most campsite. I built this area a bit differently. It’s essentially an outdoor dungeon with smoky, obscured visiblity. I darkened the map then lit up the bonfires so the players could see. However I used generic robed figures for each NPC, as the PCs would have to get close to identify any humanoids.

I played the druids like stereotyped unwashed hippies. They were friendly enough but didn’t know much about the Rite of the Wicker Giant being performed in the courtyard ahead. Heading to the nearest camp the PCs found two figures trying to pose as druids along with a bear tied to a stake.

I liked this little investigative role-paying opportunity, and the PCs correctly surmised that these two were faking it, and the bear was tied up against its will. Miri used her potion of animal friendliness (which I think she got way back in Feathergale Spire) and Talus used a divination die to ensure the bear fell under her charms. Kethra used Mage Hand to remove the stake in the ground (not sure if Mage Hand can do that, but I liked the teamwork so I allowed it) while Kalinaar distracted the fake-druids.

Once they realized the bear was free they attacked, shrugging off their robes and revealing the fire cult tattoos. Fire Cult Priests are probably the most dangerous thanks to the infamous Fireball spell. But Talus was fully rested and he negated what could’ve been a devastating attack with Counterspell. The outnumbered priests were then quickly overwhelmed (after a single round, I believe – that bear hits hard).

Also, now Miri has a pet bear (for 24 hours at least), and I was pleased to see the party take turns feeding it. Maybe the bear will stick around…

No dungeon takes place in a vacuum, and this one being outdoors poses a particular challenge in regards to noise-level, commotion, and nearby camps. I had the friendly druids approach the PCs afterward wondering what’s going on. Since the PCs generally treated them with respect they backed off, and let them continue their hunt, though refusing to directly get involved.

That’s all the time we had for in this shortened session, but I definitely look forward to the camp-to-camp investigation this dungeon brings. One of my favorite aspects of “Princes of the Apocalypse” is how nearly every dungeon has unique and fun qualities to them, hopefully creating some really fun, memorable encounters and situations.