We hit level 4 and leave Nightstone for another journey – on a cloud giant tower.

We took one last look at Nightstone as we trotted away on the horses they had given us. The town was in shambles, the drawbridge destroyed, the keep ruined. But we’d saved dozens of people from an even worse fate. Maybe there was a reason our group had come together on our journey.

Morack had provided us with our next clue: the coded tome we had found belonged to a Harper agent who was reporting on Giant activity. The Harper agent had died in the Cloud Giant attack. But she had a daughter, another Harper agent, who could decode the book.

The daughter lived hundreds of miles to the North, and we were all grumbling about the journey. I’m pretty sure the wooden construct had never even ventured outside of Ardeep Forest. We discussed taking a caravan, or even a boat out of Waterdeep once we reached the city.

The wind suddenly picked up as we crested a hill leading out to the main road. Everyone gasped as a giant cloud descended to the ground, a gigantic tower in the shape of a wizard’s pointed hat resting on top. Stairs formed in the clouds leading to the ground.

The others looked at each other in bewilderment. I grinned, “Zephyros!”

This week’s session we finally got introduced to the overarching main plot, presented rather awkwardly by a literal figure descending from the sky to explain it. Our DM made him a fun character, but it was still a lame instance of having a giant info dump (get it…GIANT).

As a DM I’ve certainly been guilty of that many times. I was hoping we would end up with a bit more mystery and investigation on our end as to why the Giants are so uppity lately.

After turning in our quests and returning to Nightstone we were finally able to leave the newbie/starter area behind. As far as catapulting us through the lower levels it wasn’t bad – featuring armies invading a town, a deus ex dragon, and a mini-dungeon with a boss fight. Balance-wise it’s pretty weird having one magic item between the five of us and barely any gold upon reaching level 4. 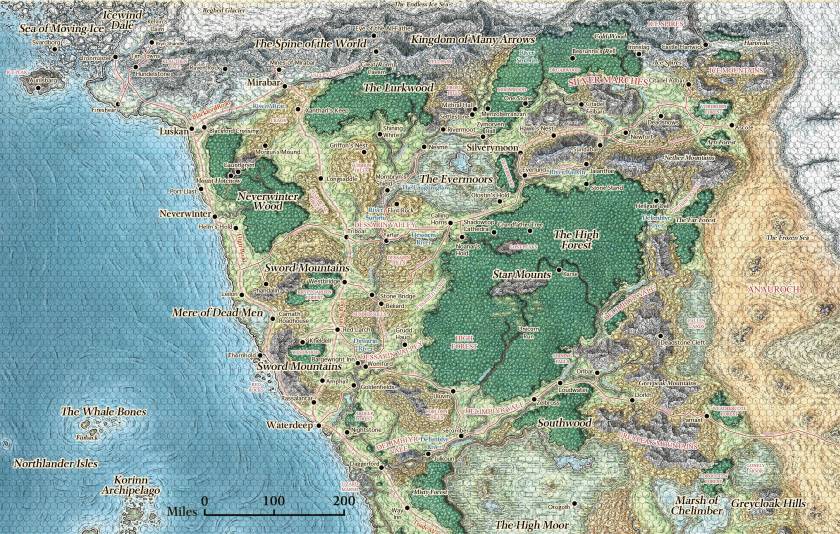 I did enjoy the follow-up investigation we had to embark on – seek out the daughter of a slain Harper whose book we carried that was written in code. She had been gathering information on the giants, and we found her coded book back in Session 2.

What I didn’t like was the daughter lived hundreds of miles away, in Bryn Shander. That was several weeks travel up the Sword Coast, which could easily be an entire campaign in of itself.

Morack the Nightstone innkeeper gave us horses but we were balking at the journey, deliberating on if we should find a boat or a caravan in nearby Waterdeep.

Turned out it was moot. Not five miles outside of Nightstone a giant floating wizard’s tower on a cloud landed in front of us, beckoning with stairs. It was the Cloud Giant wizard Zephyros, my character Kazin’s once-mentor who saved him and brought him to the monastery. 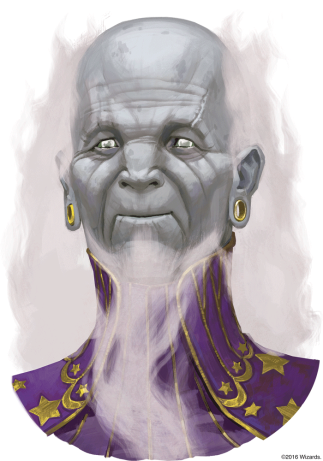 Kazin told the party everything was okay and ran up the stairs where we were greeted by the funny old Giant. He was much worse for wear – absent-minded would be a euphemism. But he was able to explain what was happening with the Giants.

The ancient caste system that kept them in check – The Ordning, had been shattered, and Storm Giant King Hekaton had seemingly disappeared. Each Giant tribe now vied for a new position in their order, naturally by wrecking shit all over the Sword Coast.

Zephyros stated that we were marked for destiny, our names known to the Outer Realms. We had to investigate King Hekaton’s disappearance and bring order back to the Giants lest they destroy themselves and the world around them.

For now our initial quest of finding the Harper daughter remained unchanged, and we began drifting North. This was an awkward period where we had a big single room to hang out in for several days with nothing to do.

I’m not sure if there are random encounters or scripted events, but after a few days (and another brief conversation with Zephyros) a small army flying on Giant Vultures approached the castle. We tried waking the sleeping wizard to no avail. We didn’t want to shoot first having not been fired upon, so we let them land, nine riders and mounts total. 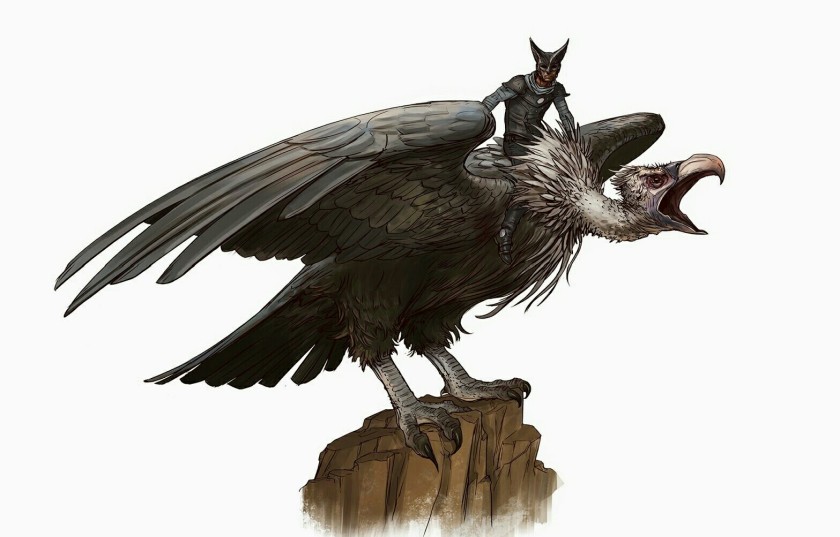 Air cultists! Son of a bitch! Didn’t we wipe all these guys out in the last campaign? Tenacious little bastards. They came in the name of Yan-C-Bin, the Prince of Air (and incidentally one of the final bosses of Princes had they chosen Air last).

This would’ve been a really interested segue into that campaign but felt a bit weird considering we’d just dealt with these guys (DM stated this campaign takes place after Princes).

This was a tricky fight as were vastly outnumbered. Cultsits aren’t strong, barely better than goblins. But two Cult Fanatics had that nasty Inflict Wounds spell, and their vulture mounts had multi-attack. To top it off one of them had a magic bag that released an Invisible Stalker, which joined the fight several rounds in.

I think our DM sensed that things could go south really quick, and mostly kept the vultures out of the fight, saying they were poorly trained for combat. The only reason we kept up was repeated misses on that Inflict Wounds spell – and some clutch Shield spells from Korinn. I got some really good mileage out of Armor of Agathys, hilariously killing and severely wounding several foes without even lifting a finger. T.I.M. got to use Soul Eater and Inflict Wounds on the Cultists, making him a terrifyingly offensive cleric.

It took us several rounds of setting up buffs and debuffs but we were able to emerge victorious. The Invisible Stalker caused us pause, however. The DM ruled we could attack with Disadvantage but that was proving problematic. We tried manipulating the magic bag it was released from which caused it to scream. The next round the creature simply ran away, diving off the cloud castle. We’ll take it!

The interesting thing about travel encounters is that the players can freely unleash abilities. Unlike dungeons there’s no need to conserve resources (unless you’re getting into multiple encounters per day) so the fights can be trickier and bigger than dungeon battles.

Even so I’m very glad our DM mostly took the vultures out of it as we would’ve been slaughtered. We took some wounds but nobody went down, and everyone used at least half their spell slots. Everybody had cool killing blow moments – Korinn melting two cultists at once with a Twinned Witch Bolt being particularly satisfying.

Level 4 + lengthy plot exposition + big battle = our longest session yet. We went over by a solid hour! Traveling via giant cloud tower is nifty, like an airship from Final Fantasy. Right now we’re still forced onto a linear path, and all we can do is wait and fight off baddies until we reach our destination. But our DM has said that the world will open up soon. I’m hoping we get to keep the flying tower to adventure in.