PROGRAMMING NOTE: Due to player vacations, next session will air Tuesday, June 11 in lieu of Friday. Friday sessions will resume June 21.

The muffled crying behind us rose into choking sobs as the first zombie shuffled over the snow. We recognized it instantly – the younger brother, freshly murdered by his own undead father as punishment for bringing us here.

His father, now a monstrous frozen wight was the murderer, but I couldn’t help but feel guilty. We had pledged to protect them even when the brothers lead us to him. They had helped their father out of misplaced duty, but they didn’t deserve this fate.

There was still a chance to protect the other son and destroy this undead fiend. I unleashed a double TK blast at the nearest zombie, shoving it backwards through Halfred’s bramble trap. While Halfred and T.I.M. kept the others busy, the wight approached me with a grim resolve. I readied my psi-glaive for attack, relying on my icy shield that I worried wouldn’t do much good against a creature of frozen death.

The wight caught me off guard by lowering its axes and reaching out with its ghastly hand. Its grasp seemingly grabbed my heart, freezing me from the inside. I felt the warmth of life drain from my body and my teeth chattered.

The wight’s eyes glowed blue, then looked up sharply at something behind us. I risked a glance backward to see Bryseis casting a spell. As she did the ground around us shook violently and the sky tore apart. I threw myself to the ground as a violent explosion whipped around us, hoping whatever power she unleashed was aimed squarely at our foes.

It only us only 12 sessions to reach level 5. That’s a far quicker leveling rate than the previous two campaigns. The Lost Mine of Phandalin lasted 18 sessions, and the players didn’t reach level 5 until several sessions into Princes of the Apocalypse.

Level five comes with a big bump in power, representing the next big tier of balance. Spellcasters get 3rd level spells and martial fighters get multi-attack (warlocks can get both, woot). We received a bit of time-travel to level up before resuming our journey into the woods with a pair of nervous young man.

Thanks to my suspicions, Bryseis’ Insight roll, and Korinn’s Invisibility we learned that the young men were definitely involved in the missing people around town. We strong-armed them into leading us out into the woods that night while Korinn stayed invisible as our hidden scout. 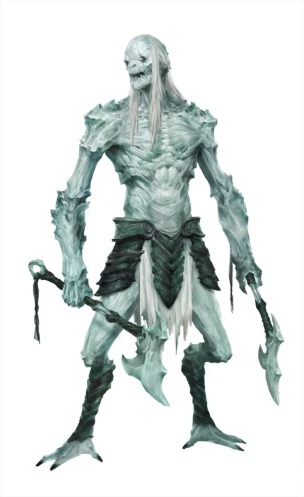 We didn’t really have a plan. When the more nervous younger brother opted to run ahead after an hour’s walk into the woods, our invisible dragonborn sorcerer followed him.

Korinn witnessed a horrific scene: the boy called out for his father, who revealed himself as an undead wight. The boys had been leading people into the woods to feed him and grow his zombie army.

Papa wight was not too pleased that the boys had lead a sizable group of seasoned adventurers into his woods. His wrath was swift – killing the boy instantly and turning him into a zombie, White Walker style!

Korinn hauled ass back and told us what had happened. We braced ourselves for battle and set up traps. I had Kazin cast a Minor Illusion of the other son’s body in the clearing ahead. Halfred blanketed the area with Spike Growth. Bryseis readied her Minute Meteors and Korinn her Chromatic Orb. T.I.M. began buffing us with Aid.

The crunching of snow alerted us to the wight’s presence. Unfortunately he spotted the Spike Growth trap to the Northeast, and went around to the North, barreling into Halfred before the halfling ranger could fall back.

Instead of disengaging, Halfred was brave and shoved the wight into the Spike Growth, taking a bit of frost damage from the Frozen Wight’s Chilled Body. He retreated while T.I.M. moved up to support him. The wight’s zombies approached – including the newly formed younger brother.

The sorcerers unleashed their spells while I moved Kazin up to knock one of the zombies into the Spike Growth with my Repelling Blast – a fun combo.

I think I experienced my single worst session of D&D in terms of rolls, rolling between 1 and 7 for every attack. Thankfully zombies have absolutely garbage AC so I was able to hit a few times.

The Frozen Wight was a monstrous foe, draining my life and taking some serious punishment. But we weren’t in the middle of a dungeon. We were fully rested with all our new level five resources.

Just after T.I.M. buffed everyone again (forgetting he could Turn Undead) and we settled in for a melee slog, Bryseis channeled some supreme Wild Magic and obliterated everything.

Her Chaos Bolt has been an appropriately signature move for her gambling tiefling, and at 3rd level it packs a serious punch. She rolled max damage, which lets it bounce to multiple targets. Due to the power she was unleashing our DM decided to let her roll for Wild Magic right then and there. 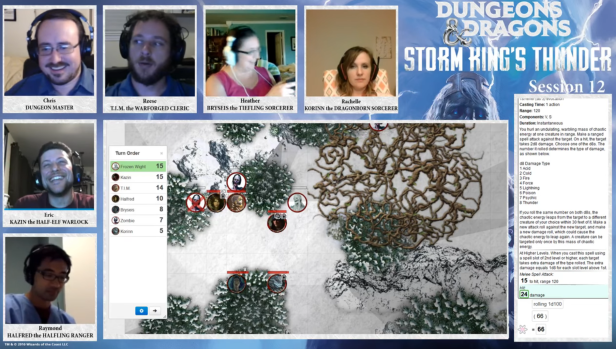 She rolled a 66 on the Wild Magic Surge table, which means she can target up to three creatures for 4d10 lightning damage. ZAP! A thunderous boom was followed by lightning strikes on all the zombies, in addition to the bouncing Chaos Bolts! In one move Bryseis violently destroyed all the zombies, leaving us bewildered but unharmed.

After the battle the surviving older brother was inconsolable and the DM did a good job explaining that the young men were heavily bullied and pressured into doing these deeds, making them more sympathetic than evil or ignorant. Kazin felt for him and told him to leave this town behind and go to Bryn Shander to help the Sheriff.

The wights and zombies had little loot, and we didn’t learn how the father was able to transform into such a creature. We returned to Lonelywood to report that we had solved the crime, and made our way south to Caer’Dineval to our next assignment, “ice eating horses.”

Before our session ended we ran into a scripted encounter on our way over the snowy hills. A large, bloody trail lead away from Bryn Shander toward the East. We surmised that it could belong to a fleeing Frost Giant from the siege we had spent two sessions battling. 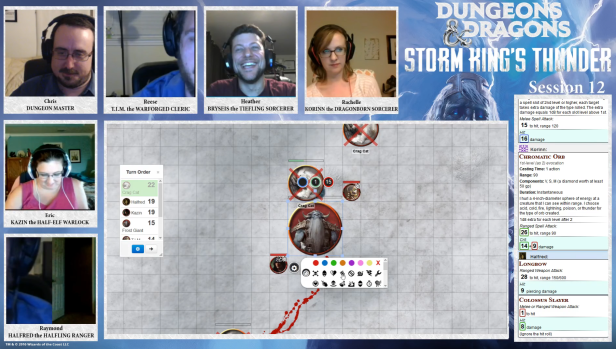 We crested a hill and our hypothesis was confirmed. A wounded frost giant was fighting off several crag cats. We began attacking the crag cats, thinking we can try to interrogate the frost giant. With our combined efforts at long range, the cats quickly scattered after a round or two.

The giant was more enraged than talkative, however, recognizing us as the ones who killed Drufi (word travels fast I guess). We were forced to battle him.

This time the numbers were in our favor, and he was heavily wounded. Halfred sunk some deadly arrows into his face, softening the final blow to knock the giant unconscious.

Hopefully he’ll be in a more talkative mood when he wakes next session and we can get some much needed follow-up answers as to why the frost giants were attacking the city.