The tavern reeked of blood, sweat, and death, but we had to remain a while longer. Bryseis bodily dragged the bound dwarf known as The Weevil down the stairs toward his office. He grunted and occasionally spat out blood, but the cruel smile never left his face.

“Give me a dagger,” he growled when we shoved him up to his office. Bryseis glared at him, then methodically pulled out her loaded crossbow and aimed it at the back of his head.

She slapped his own dagger back in his bound hands. “You try anything, your body will go first,” she replied menacingly.

“Don’t be stupid, dear,” he said. “If I was going to activate the trap, I’d be the first one gone.” He gingerly shoved the blade into the seal of the door, maneuvering it deftly. We heard a soft clicking sound on the other side, and the door swung open. He walked in and dropped the knife with disdain.

“Take a long around, what’s mine is yours, obviously.” He nodded to Bryseis and stepped back out.

Bryseis hesitated, glancing back between him and the office.

The Weevil grinned. “Bryseis dear I’m not a dumb man. If I was to let one of you die from a trap, my life would end pretty quickly thereafter. For the time being I’m not going to let any of you die.”

After Bryseis disappeared inside he turned to the rest of us . “As I’m sure you’re aware, my employment with the Zhentarim is at an end. It appears I’m looking for a new job. And you’re looking for information.”

“It is.” That smile never left the dwarf’s face. “Here’s the proposition: you don’t kill me. You don’t use the notice you’ve got in your pocket. In return I give you everything I know on what The K Society was looking for, and where they were looking for it. And I continue to find more information on what they’re doing – for you.”

Entire sessions without combat are beginning to become commonplace, which still kind of weirds me out coming from the dungeon-happy campaign that was Princes of the Apocalypse.

But this session proved invaluable as we received a wealth of useful information from the Weevil, not to mention the shady new ally himself.

With the Zhentarim outpost of The Feral Hound full of dead Zhentarim, we roused the Weevil back to conciousness with a bit of Lay on Hands and got to work.

The Weevil was surprisingly forthcoming and pragmatic, and combined with Chris’ excellent voice acting immediately endeared him to us. Bryseis had the right idea to wake him up so he could dismantle any would-be traps in his office – and he did just that, saving us from an embarrassing fire-in-the-face gag.

In his office Bryseis found tons of loot, including incriminating ledgers and piles of coins and gems.

I lead the interrogation. Despite burning all my spell slots in the previous battle, I wouldn’t have to probe his mind at all. For the simple exchange of his life and freedom he told us everything he knew about The K Society, a Frost Giant named Harshnag, and the mysterious organization that was seeking to keep the Giants in their current state of escalating chaos.

It was an info-dump, but made fun thanks to the DM’s gravelly, surly depiction of the dwarven Zhentarim leader.

We learned that The K Society was lead by a powerful Kraken who was aiming to expand its control on the mainland, though its overall motivations and ultimate goals (generic conquest?) are still unknown.

Harshnag was the Frost Giant from Halfred’s past, apparently an ally. He (and everyone else apparently) was seeking out treasure sites from the Ostorian Empire, the ancient civilization of the Giants. The Weevil had located three such sites that we could follow-up on: Beorunna’s Well, Grandfather Tree, and Morgur’s Mound.

He knew little about that mysterious third organization of their tenuous Axis of Evil (Zhentarim and K Society being the other two). We’d met, and slain one of their members in the Xantharl’s Keep outpost, an orc emissary. This group was content on keeping the rampage of Giants ongoing, and we suspected may actually have caused the entire thing to start in the first place. The Weevil didn’t even have a name for them yet.

The Weevil had admitted his poor choice of allies, and revealed a bit about Bryseis’ and T.I.M.’s backstories.

Bryseis was all set-up to join the ranks of the Zhentarim before betraying them when her first big job was to hand over her mother’s gambling house in Baldur’s Gate to them. She’d been hounded by them ever since, and popped back up on their radar when we first met in Nightstone.

T.I.M.’s backstory became even more shocking when The Weevil revealed that ‘the statue’ was a heist job they stole for Enebrin, the ranger whom T.I.M. was modeled after. Curiously The Weevil could not remember anything about where they stole him from, as if a magical curse was placed upon him that physically caused him pain when he tried to remember. We had a bit of fun with that. 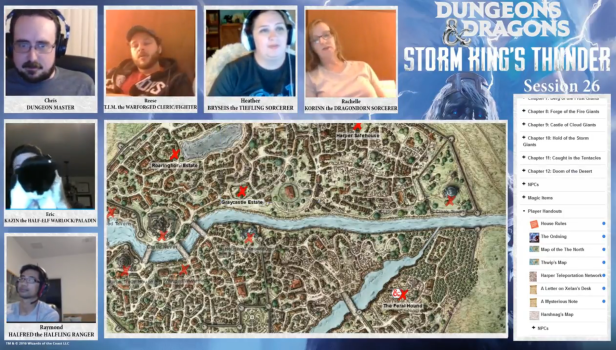 Despite staring at a 5,000 gold wanted poster we ultimately cut a deal with The Weevil: we’d take him to Miri Greycastle’s estate, former hero from the Princes of the Apocalypse. She’d use her resources and connections, including Kethra’s school of assassins, to keep the Weevil under guard. He was not to leave the city.

In exchange he would continue to feed us intel and information about the Giant threat. He’d be our own personal shadow broker!

I liked this idea. I figure even Lawful heroes would see the need to have such an asset during a worldwide crisis. We promised to reevaluate his standing depending on the actions and information he undertook going forward.

After a Long Rest we all reached level 7, huzzah! My Warlock/Paladin combo synergy really takes off here, with Divine Smite and Great Weapon Fighting coming online, as well as some low level mind-fuck spells like Command and Wrathful Smite.

We looked at our map at the three sites The Weevil had given us. Morgur’s Mound was the closest to Neverwinter, but without a main road leading anywhere near there (it was closest to Xantharl’s Keep, which meant teleporting to Mirabar).

The other two were farther out to the East, closer to Everlund. Oh right, the hippogriffs! We quickly decided it would be far better to actually use our hippogriffs to travel. We used the Harper teleporters to zip back to Everlund.

Beorunna’s Well was a few days travel, even by air, to the Northeast. The Grandfather Tree was in the middle of the High Forest, just over a day’s travel to the South. Grandfather Tree it is! And hey, that’s where we pointed Snigbat and the goblin kids into. Hopefully they’re okay.

We didn’t meet any resistance during our flight, and were able to use our Instant Fortress to safely camp for the night. The next day we flew down to the massive, 300 ft tall tree, which housed four regular-size trees beneath its great canopy.

The only clue we had was that ancient Stone Giants had buried something beneath its roots.

As we approached we heard ancient Elvish whispering among the trees. As a half-elf Kazin understood the language (as did Halfred’s Ranger experience). We followed the voice to one of the four trees.

At first I thought the tree itself was speaking, but it turned out to be a dryad. She and her sisters were protectors of the trees, and the Grandfather. At the same time Halfred’s Primeval Awareness was picking up half a dozen centaurs racing towards our direction.

I reassured the dryad that we were not here to harm the trees (not now anyway). We were investigating something that could help stop the giant crisis – an event that would eventually spill into the forests.

One successful Persuasion check later and the dryads agreed to help. They called off the centaurs when they spotted us, and even opened the way to the massive stone object under the tree. Turns out it was a doorway into an underground biome.

The dryads warned us should any damage come to the Grandfather Tree, they’ll take our hippogriffs and our lives become forfeit.

Hopefully we can find or learn what we need without it coming to that, but who knows what we’ll discover down here?