We split the party and take on the entire Zhentarim outpost at the Feral Hound tavern.

The short tunnel ended in an odd wall of wooden planks. I was preparing to crash into it when I felt a firm grip from behind. Bryseis was reaching out and bumping into my invisible body.

“Do you see anything?” I asked her telepathically.

She found a loose plank and pulled, and the entire section of wall swung open, creaking terribly.

I realized we were about to breach the tavern through this underground secret entrance without updating Halfred and T.I.M. I reached out with my mind to try and find theirs. It should’ve clued me in to be worried that I actually did sense their minds nearby – far too close.

I sent them a message that we were inside and not to do anything foolish yet. We would laugh about that later.

A massive suit of armor strode into view in front of us. It was covered head to toe in gleaming, spiked plate mail. It glowed from the inside with a magical red light. There was nobody inside.

“INTRUDERS,” it intoned in a frightening monotone. “THEY ARE THE ONES WAITED FOR. KILL. KILL. KILL.”

We seem to be in an odd cadence where we have several role-playing heavy episodes, followed by one crazy big combat sequence. It happened in Yartar, and now again in Neverwinter as we stir up the entire hornet’s nest that is the Zhentarim outpost at The Feral Hound tavern.

We knew we would finally find the Zhentarim dwarf leader known as ‘the Weevil’ inside the Feral Hound tavern, thanks to our intel from the Roaringhorn Gala. We didn’t know what to expect beyond that, other than the tavern should be far emptier during the day (not exactly!).

We’d received a tip to check out the backyard of the tavern. We also had a plan to try and dress up Halfred as the halfling we had captured, Diero, who was set to meet with the Weevil.

We weren’t terribly organized with our approach. Korinn cast Invisibility on herself and Kazin, and the two of us went with Bryseis to check out the backyard. T.I.M. and Halfred remained out front, with the poorly disguised Halfred waltzing up to ring the front door.

I know, I know, don’t split the party and all. As I said, terrible planning!

Bryseis discovered something odd beneath some scattered bones in the back. I guess the bones in general were odd, but we did know the tavern was a seedy dog-fighting ring. We ended up finding a secret trapdoor and went down into a dark tunnel.

At this point the two teams both infiltrate the tavern from two different directions, just about at the same time.

Halfred and T.I.M. were brought inside the tavern and lead to the basement. There the Weevil chided them for being incredibly stupid, instantly seeing through the disguise. We didn’t even dress up T.I.M. at all and I’m pretty sure the Weevil knows who we are at this point. 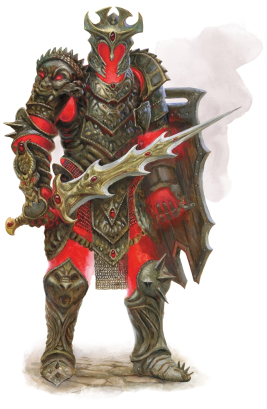 More than half a dozen weapons were drawn as our heroes were surrounded. They were about to be lead to the cages but then they heard an alarm go off.

The alarm was in the form of a damn pair of Helmed Horrors. At the end of the tunnel the three of us had found a false wall of boarded up planks. Byseis plulled a switch to open it up, and suddenly we were face-to-face with a pair of automated sentries.

So much for the god damn secret entrance! I’m actually pretty irritated at this; that intel about the backyard was terrible advice, leading us into the waiting arms of the toughest creatures in the dungeon.

Combat exploded for both parties.

With a warlock and two sorcerers in the tunnel we’re not exactly subtle. Spells flung out at the Helmed Horror, who annoyingly stood its ground with a 20 AC and several spell resistances and immunities.

I had Kazin use Armor of Agathys (3rd level) to help tank the threat and protect the sorcerers. I would end up using both my spells slots to cast it twice, and ended up using almost all of those 30 temporary hit points! I believe it also hit several times for 15 cold damage each. For as disappointing as Mirror Image was last time I used it, Armor of Agathys was pure awesomesauce here.

Korinn would cast a twinned Haste on Bryseis and Kazin, but it still took us forever to carve our way through the beefy constructs.

Meanwhile Halfred and T.I.M. were in serious trouble, surrounding by a large number of Zhentarim. Halfred deserves the MVP for quick-thinking and creativity. He cast Fog Cloud right in the middle of the room, then used his Winged Boots along with a STR Check (using inspiration) to grab T.I.M. and fly the hell out of there (T.I.M. would also throw out a Silence spell for good measure).

What an awesome scene! They were still in hot water even as they flew to up to the first floor, which also contained several foes. From the frying pan into the fryer.

What followed was a lengthy combat sequence that lasted the entire session. The Weevil split off from Halfred’s group to come at ours, using a magical gem earring to try and blind us (unsuccessfully the first time, then successful the second).

I was surprised that the Weevil himself was actually pretty weak, at least compared to the crazy strong Helmed Horrors. A few spells thrown in his direction and he was ready to flee. Hilariously both Korinn and Kazin got in some solid Attacks of Opportunity despite being blinded.

Bryseis would chase after the heavily wounded dwarf and he immediately surrendered. She clocked him and he went down like a sack of potatoes.

The rest of the fight kept going. Korinn and I finished off the last Helmed Horror while Halfred and T.I.M. fought off the entire rest of the tavern. Their Sticky Shields they had nabbed from the Kuo-Toa came in very handy here, disarming several of the Zhentarim fighters.

T.I.M. would spend at least two rounds just healing himself but he was able to stand his ground until the three of us were able to finally join them upstairs. Bryseis threw out a black bear from her Bag of Summoning and we cleaned up the last few Zhentarim (who stubbornly refused to surrender).

We successfully captured the Weevil, huzzah! I didn’t expect this session to be a dungeon crawl that quickly devolved into one big combat sequence. I thought we’d get a chance to role-play, sneak around, or play at some subterfuge. But nope, shock and awe it is! I for one am never taking a secret entrance again.

We gained enough experience to level up to seven next week. We can also interrogate the Weevil (he teased that he had some info for us) and turn his ass in to Mirabar for a sweet reward.