We survive a nasty battle as the thorn maze springs to life before finding the entrance to the inner sanctum – an entire grung village.

The party had to survive one final challenge in the thorn maze – involving killer thorns, before they reached the exit to the inner sanctum. The middle of the maze revealed an entire grung village and a large temple sporting ritual combat between prisoners.

Can the party find Azaka and make it out alive?

I had a few more thorn maze encounters planned depending on how many successes Therin had on his survival checks. Now that they made it through I can reveal that it requires six successful DC 15 Survival checks to make it though the maze, with a chance for an encounter after each one.

One more encounter was going to happen no matter what – a pair of assassin vines ambushing the PCs while they were going through particularly tight corridor. These are interesting CR 3 plant monsters with low AC but huge health pools, capable of grabbing enemies and auto-poisoning them a round later for buckets of damage (6d6!) as well as an AOE restrain.

The surprise round was devastating. All but George were restrained from their entangling vines. George was then attacked and grappled by the second one. The following turn they injected their poison, downing George! The rest had to spend a turn getting out of the vines. I took pity and had the vine that downed George hold on to his body for an extra turn before grabbing Therin.

Therin’s dwarven poison resistance (as well as wild shaping) proved very useful here, as he effectively tanked the southern vine, while one of the tabaxi took the brunt of the other one. 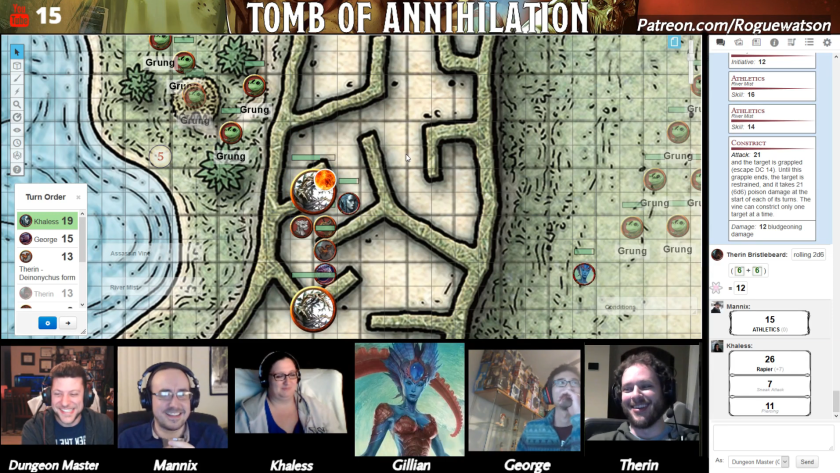 Oddly the vines are resistant to fire. You’d think fire is generally a great idea against plants, as Therin cast his Flaming Sphere to deal constant damage. The one interesting balancing factor is that once the vine grabs somebody, it can’t attack anyone else, limiting my action economy even further. The party eventually took them down, though I ultimately had one of the vines retreat back into the wall when it was low on health.

I had downed George (though he resisted another lingering injury) and nearly killed one of the tabaxi in the process. The encounter was especially challenging because one of our players was sick that evening, and instead of running her character I spirited her away by claiming she became lost in the maze. This could lead to an interesting followup in our next session!

Though Therin did fail his first Survival check of the evening, my PCs had been through a hellish fight, and instead of compounding another encounter, I let them short rest. Plus, George acquired the vine, his third ingredient on his Monster Hunter personal quest (after the zorbo claws and almiraj horn).

With three ingredients he was able to craft a magical item, a +1 segmented short sword covered in barbs called the Thorned Blade. He can use a bonus action to transform it into a whip and back. In whip mode it acts exactly like the Vine Whip spell, with 30 ft range and a successful hit drags them 10 ft closer. He was stoked to get it, especially after getting his butt kicked in that previous fight. 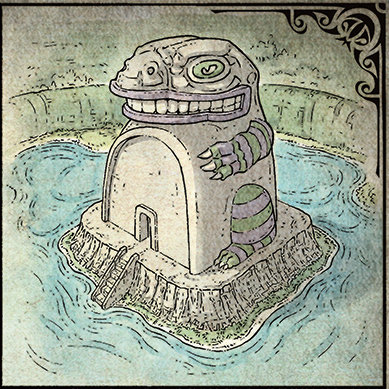 Therin rolled successes on the next two checks, preventing any further encounters. They reached the exit, revealing the inner sanctum of the grung village.

It’s a large open area filled with a shallow lake (or a big pond) with a frog-shaped temple in the middle. Inside the temple two raggedly dressed figures were locked in combat, a human woman and a batiri goblin, with grung chanting all around. The woman killed the goblin, and the grung feasted on the dead while escorting her back to a cage.

From there the party had to make a plan that wouldn’t involve the entirety of grung society descending upon them. Naturally George’s impulsiveness won out, though I was impressed that he didn’t go murder-hobo crazy on them. Instead he put on a little performance, pretending to be wounded, and drew the few grung at the entrance into the maze, to his stealthily waiting compatriots.

Therin had been able to acquire a new Giant Frog form by staring at them in the pond (we have house rules for acquiring new beast shapes), and used the new shape to bite, then swallow the grung. Hilariously he had to roll CON saving throws to avoid being poisoned from eating them, but he has a high CON and advantage against poison from his dwarfness. Bring on the delicious grung! 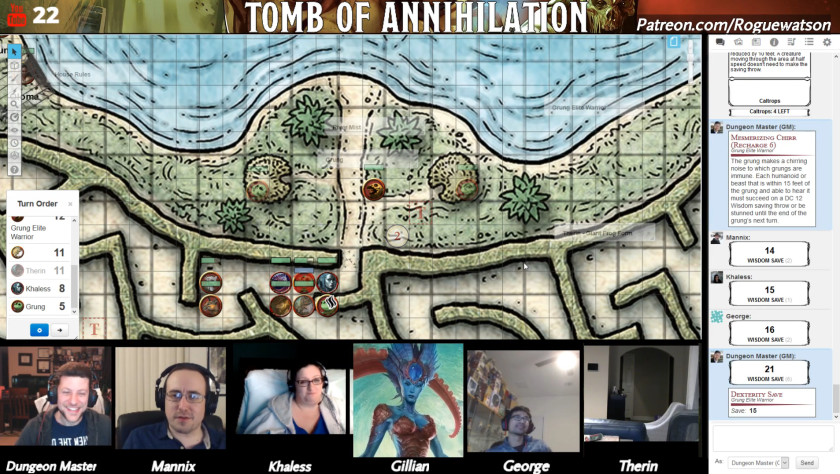 The grung elite warrior tried his mesmerizing chirr, but everyone made the save. As the green grung fell he escaped and called the nearest grung to his aid, but was brought down in a whirl of blades and arrows.

The last grung  tried to warn the warriors at the temple as it died, but the PCs scattered and hid. They played it right and managed to take out the grung at the entrance without alerting the whole area. Messy but effective.

Mannix used the pond to stealthily approach the captured woman, but it was Therin in his giant frog form who had the easiest time getting around, since the grung treated them like stray dogs. Therin swam right up to the lone grung guard and ate him, insta-killing him thanks to our massive damage house rules. He may be getting a bit of a high from consuming all these tree frogs!

Mannix approached the woman while Khaless and George stayed hidden near the entrance. The PCs have all kinds of questions and remain in a very precarious position surrounded by grung. We’ll see how they handle it next week!

One thought on “Tomb of Annihilation Session 23 Recap”