Weretigers, Flying Monkeys, and Mad Mist, oh my! The party continues their travels up river, finally arriving in Camp Righteous.

Travel along the River Soshenstar toward Camp Righteous continued. Where last week was mostly a series of standard combat encounters, this time I unleashed several encounters that weren’t directly hostile.

Well, except for the weretiger.

The secret is out! Azaka carries a dangerous curse. I had been debating about how to unleash it, and decided to turn it into a night encounter, courtesy of a full moon.

Khaless was the one to follow her tracks leading from the camp. She heard some strange noises, followed by a pair of almiraj (cute bunny-unicorns) darting into the campsite with a tiger on their heels.

With a 28 Stealth roll Khaless was able to get a stealthy ambush attack on the tiger. She quickly realized that her non-silvered/non-magical weapons didn’t do much to deter the beast, and called out a warning to the others.

The PCs instantly diagnosed the problem (I also very clearly mentioned the light of the full moon). The Azaka-tiger pounced and killed one of the almiraj, and retaliated against Khaless with a nasty swipe. 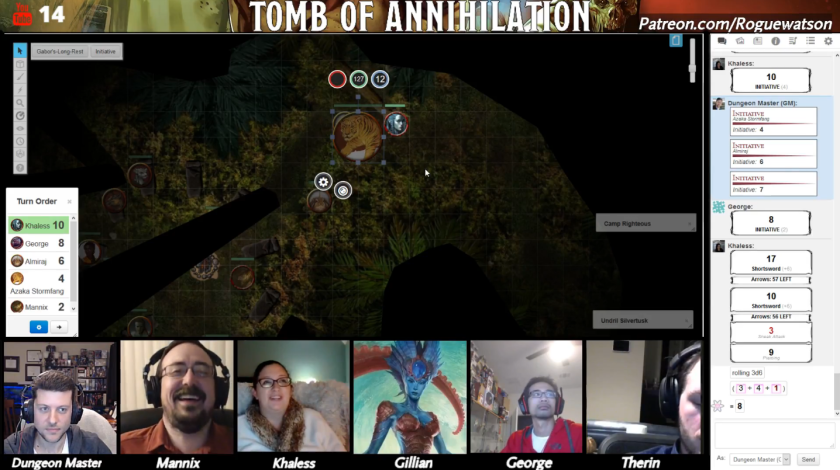 Mannix set up a hunting trap while George scooped up the one surviving almiraj to safety, which was so adorable I let him do it with no skill check needed.

Khaless surprised everyone by dropping her weapon, staring Azaka-tiger in the eyes and tried to appeal to her human side and talk her down. She rolled Animal Handling with advantage (I try to award good role-playing with Advantage) and she responded with a double crit!

The situation was defused after that. The weretiger took her initial kill into her mouth and loped off into the darkness without causing any more trouble, just as the rest of the campsite was starting to stir (Therin cast Speak with Animals just to be safe).

The next morning the group found Azaka looking guilty by the canoes, and she explained her situation. The item that she hoped to retrieve from Firefinger had helped her suppress her lycanthropy. Without it she’s in danger of succumbing to her bestial nature, whether by light of the full moon or through extreme stress or danger.

With day six I actually rolled up three encounters – but none of them really involved combat. Flying Monkeys are a CR 0 nuisance, but capable of stealing the party’s goods (I opted for ammo). I got a few bits of ammo, and Khaless responded by skewering one of the cute little buggers. Brutal yet hilarious, and definitely in keeping with her character.

I made the explorers fleeing a group of goblins and turned it into a cutscene showcasing the goblins of Chult. The PCs tried to fish out the bodies but came up short on loot. They did find a nice piece of loot that evening, with the explorer’s campsite (and the charred, spit-roasted gnome). 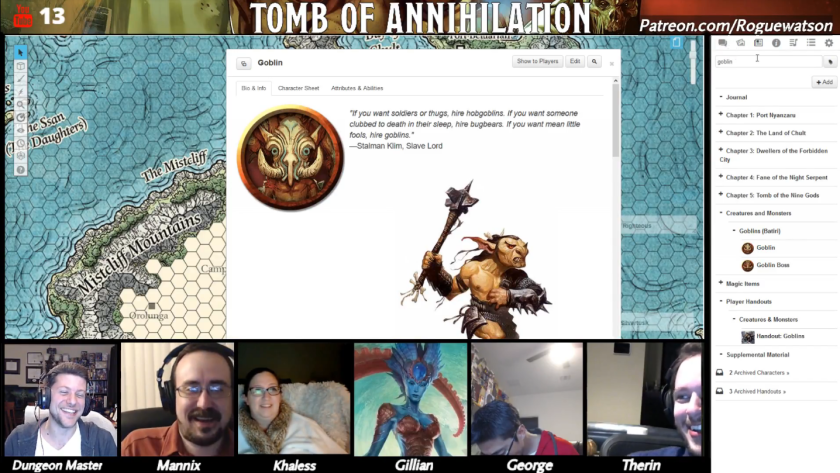 On day seven a mysterious blue fog rolled in over the river as the party approached Camp Righteous. In a move completely surprising the DM, Therin had a spell that specifically could dissipate fog – Create or Destroy Water. I did make one person per canoe to roll a DC 13 Athletics check to keep near Therin and maneuver the canoes to the side.

Khaless failed the roll, and her and the Tabaxi were exposed to the Mad Monkey Mist. I won’t spoil it here but if you watch the stream and look it up in the Dungeon Master’s Guide, you can find what debilitating effects have befallen them.

I waited until they reached Camp Righteous before the effects took hold, with Khaless dropping unconscious while the Tabaxi clutched each other tightly.

The camp was a wreck, and clearly not the fortified outpost they were hoping for. It was built next to a massive ancient Chultan shrine with a dark tunnel beckoning, but the surrounding tents and buildings were destroyed and burned down. 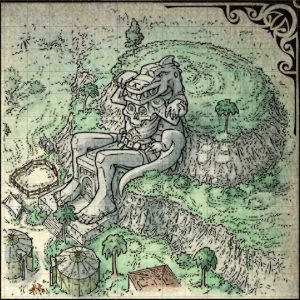 Mannix did some detective work and found the commander’s journal – as well as a poisonous snake, who bit him with a crit attack! He survived (barely). The journal explained that the Order of the Gauntlet was here several weeks ago. They weren’t able to get inside the shrine, finding it heavily trapped. They fended off a few beast incursions and noted some roaming hordes of undead.

Undril found a hastily written parchment in the remains of the shrine. It spoke of how undead came pouring out of the jungle in great numbers, forcing the Order to abandon the camp. Undril is convinced that the Order is still out there, and that they should explore further upriver.

Before ending our session, Mannix was able to befriend a young Axe Beak who had been left behind in the animal pen. His Animal Handling rolls were horrible but he role-played the scene well so I used contested checks, and he was able to beat the young beast’s paltry -3 CHA checks. Combined with George’s new pet almiraj, this campaign is suddenly turning into Pokémon!