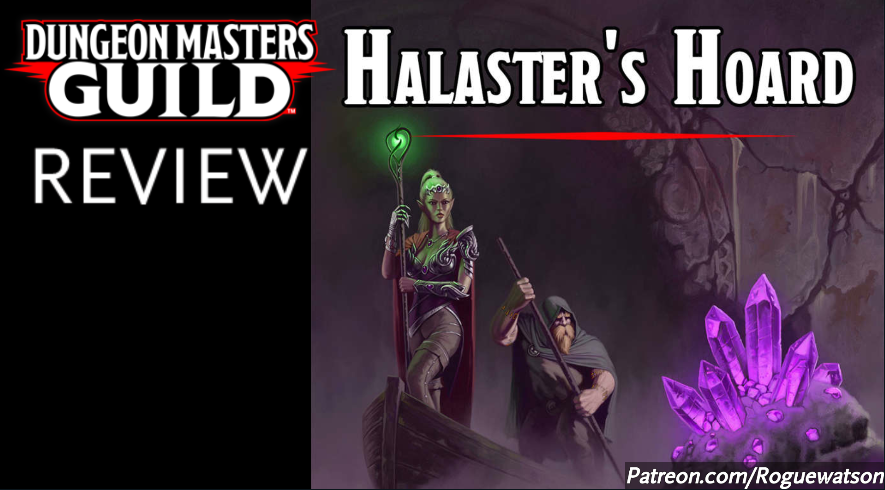 A review copy of “Halaster’s Hoard” was provided by the publisher. Find more DMs Guild Reviews on my website and YouTube channel.

Waterdeep: Dungeon of the Mad Mage is a mega-dungeon full of just about every dungeon-crawling idea, monster, magic item, and weird denizen you can ask for. But just in case you want even more, “Halaster’s Hoard” is here to provide.

The tricky part about theming a supplement for Dungeon of the Mad Mage, is that Undermountain encompasses so many different themes. Entire biomes are separated by different levels. Undermountain includes haunted mansions, drow fortresses, underground forests and rivers, and even a portal to an orbiting asteroid.

“Halaster’s Hoard” thus includes a bit of everything when it comes to magic items and monsters. Over 80 items are provided – over 100 if you include the somewhat mundane low level loot appendix that are reminiscent of the Common magical items from Xanathar’s Guide to Everything.

I did love that every single item includes flavor text, often detailing some brief but rich backstory. Some of them are a little long in the tooth – unless your item is a legendary artifact, it probably doesn’t need to have more than a single paragraph.

My favorite items were those that embraced the goofiness that the Mad Mage often embodies. Like a jar of clockwork bees, or a magical pair of pants that grants the user invisibility – but only in the parts the pants cover. And I laughed out loud at Lordinal’s Bitchin’ Magic Shuriken, which is as awesome as it sounds.

Halaster’s Dens are included under items, but are actually areas that PCs could stumble upon. These grant neat rewards without giving PCs permanent, powerful items or limitations. At the Arcane Library, for example, a wizard could learn a new spell, while the Bed of Rapid Rest provides Short and Long Rest opportunities at a fraction of the time. 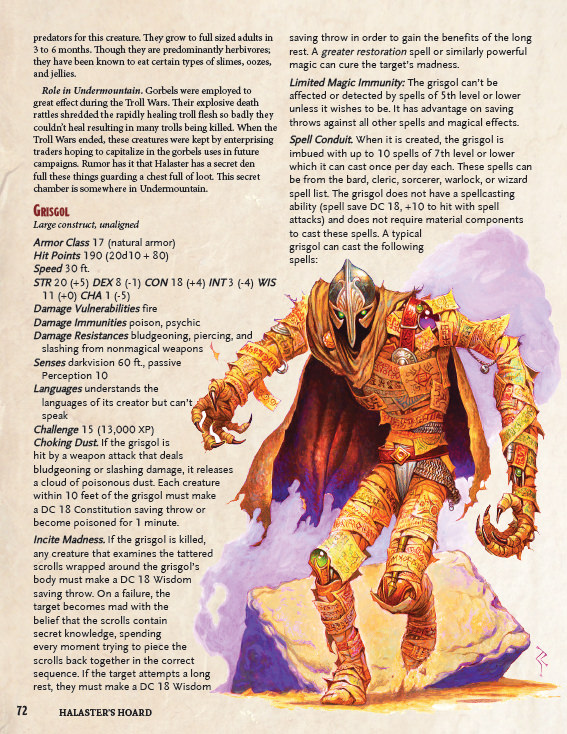 I didn’t try to count the number of monsters, but there are dozens here, including crystal scorpions and golems,  flying eyeballs, bone-spear stabbing insects, and a particularly cross house cat! Many of the monsters play it safe when it comes to slightly tweaking existing foes we’ve seen in officially published books, but a few caught my attention, like the tentacled Deepspawn that gradually creates an army from creatures it has consumed.

From beasts to undead and abyssal monstrosities you’ll find a monster for just about every area or level of Undermountain – which also means they’ll work pretty much everywhere else too. Each monster entry is well-organized with notes on their preferred combat tactics, their habitat or society, their natural place in the world (or lack thereof), and the whys and wheres when it comes to Undermountain.

And since this is the domain of the mad mage, several traps are included as well. Many of these are quite interesting and inventive, such as the Portal-like illusion that motivates a PC to shoot at an enemy’s backside, only to have that arrow fly through a portal and hit them in the back. Or the Guillotine Door which is sure to make your PC check every door very thoroughly for the rest of their adventuring career.

One of the traps, the Slippery Stairs of Burny Death, is featured in the Halaster’s Vault mini-dungeon included at the end. It’s a Tier 3 dungeon that does a fine job showing off some of the traps and monsters from the supplement itself, such as the aforementioned oil-slick stairs and a boss at the end in the form of a grisgol, an anti-magic construct.

I’m not a fan of the Dyson Logos style, and while I like having a 3/4 cutout of the trap-filled dungeon, it’s a bummer we don’t get an overhead battle map.

Halaster’s Vault is a short romp that can easily be completed in a single session, with a nasty teleporting spike trap, a secret door with undead, a few wall oozes, the flammable oil-slick stairs, and a final showdown with a grisgol. The reward is a literally bloodthirsty +3 sentient greataxe named Flesh Grinder. A nicely memorably little side jaunt that tops off a supplement overflowing with quality content.

The Verdict: Featuring a huge amount of fun, varied magical items, monsters, and traps, “Halaster’s Hoard” is a supplement that even the mad mage himself would approve of.

A review copy of “Halaster’s Hoard” was provided by the publisher. Find more DMs Guild Reviews on my website and YouTube channel.