Note: The Typhoon Palace is not originally from Tomb of Annihilation. It appears in the Torte Package by Wizards of the Coast. I’ve adapted it to our campaign.

After a week off from D&D last week, the party leaves the hidden pirate base of Jahaka Anchorage and sails across the Bay toward a mysterious seaside temple palace dedicated to the Goddess of the Sea, Umberlee.

The Typhoon Palace represents the first of my PCs’ personal quest culminations. Each of them has their own reasons for originally journeying toward Chult. Gillian’s is that she was searching for her brother.

They were part of a diplomatic envoy to a grand temple ship to broker a piece between her side and the kraken’s. But after a few days her party was attacked. Her and her brother escaped but were separated, and only she made it back to the sea. She lost sight of the ship in a storm and was forced to return to her people.

The war continued to rage for years until the kraken suffered a blow in Storm King’s Thunder, and she was finally able to request leave to search for her brother.

Throughout their time in Chult, she’s had several clues as to the ship’s location. The first was when Grandfather Zitembe performed a divine ritual, which pointed toward a wrecked ship, survivors, and a temple to the southwest. The second was the crew of the Star Goddess, who mentioned seeing a temple ship that looked oddly like the design of a grand ship to the west.

Those clues pointed to a location in Jahaka Bay. No sign of the ship, but what stands is a grand temple dedicated to Umberlee. Could this have been built out of the ship?

At the entrance the PCs passed through a shimmery forcefield, similar to the protective dome in the Heart of Ubtao. Perhaps a clue of the kinds of foes they will encounter within.

The temple was designed more as a palatial seaside mansion, though now dilapidated and overgrown with wildlife. Therin surprised me by casting Speak with Plants to try and learn some information. Unfortunately there hasn’t been any activity in the last day, limiting the plants’ information. But I liked the use of the spell, so the plant warned the PCs about the giant wasp nest ahead.

They were able to prepare, with Gillian casting her protective hut, and Mannix using his Silent Image to project himself walking up to the door.

A wasp swarmed his illusion, and he and Khaless shot it dead. The rest swarmed out of the nest, and poor Mannix was the only one not in the hut. He took two vicious stabbings from the giant wasps and went down, resulting in a Nasty Scar lingering injury. Poor Mannix. Wasps have a nasty sting but very little defense, and went down quickly the next round (George killing all three with Action Surge).

The door to the palace was open, but a lowered iron portcullis stood in their way. George wasted no time and excitedly used his Cape of the Mountebank to teleport inside. The feasting hall was destroyed and broken, but a nearby winch raised the portcullis for the rest of the party.

They officially entered the Typhoon Palace. Mannix found a holy symbol of Umberlee buried underneath the detritus and mess in the dining hall, and put it on just in case.

Then they explored a rubble-blocked room in the southeast. They found a fountain pool shaped like a crab with some coins at the bottom. Khaless reached in and felt a tingling sensation, but made the CON saving throw.

Mannix used Detect Magic to see Transmutation Magic all over the crab basin, along with a dozen small crabs milling about. He summoned his frog statue and made it jump into the pool, where it failed the save and transformed into a crab. They were hoping to grab the other crabs out of the pool to see if they transformed into other things, but they were in fact, just crabs.

The party moved on, using Mannix’s Detect Magic as a magic detector for where to go (or what to avoid). His magic beacon went off in the southwest room. Opening the door they found a statuette of Umberlee that radiated a magical aura of Abjuration.

Mannix may be weak at fighting but he’s a pro at investigation, and found a Glyph of Warding on the statue that was tied to his holy symbol. He wrapped the symbol around his poor frog-crab and made it clamor aboard the statue as an experiment. Nothing happened.

Mannix then put the symbol back around his neck and gingerly grabbed the statuette. Nothing happened. Success!

In the same room they found a window leading outside to a ledge. The ledge belonged to a crumbling walkway that wrapped around the north and south. The north had a big gap in the middle, but the southern end led to another door.

The door opened into a grand throne room overlooking the sea. When Gillian entered she saw a vision of the past. Robed priests holding her captive brother, and the high priestess condemning him to death, though she looked upset about it (as did the brother).

When the scene ended several spirits erupted from the vision. Four of them possessed nearby suits of armor, while another attacked as a wraith. Roll for initiative! 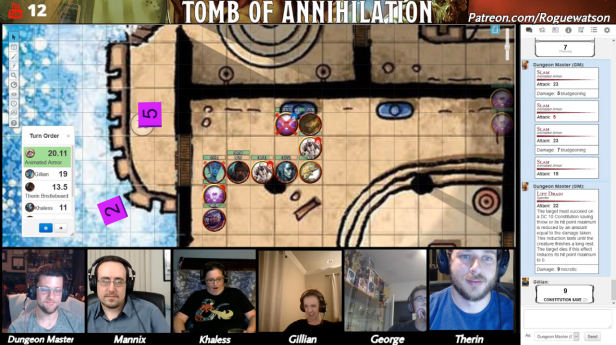 Animated Armor are only CR 1, a relatively easy foe for a party of level 5 PCs. The CR 5 wraith is a bit stronger and caused Gillian some headache with its powerful Life Drain attack. The wrinkle in this fight was that each spirit was still inside the armor, spawning a CR 1 Specter every time an Armor was defeated. Both Mannix and Gillian would take some severe damage in this fight (with Gillian having to cast healing spells), but ultimately the party prevailed.

What other secrets of the past does the Typhoon Palace hold? What’s up with the relationship between Gillian’s brother and the high priestess? And can Mannix’s cautious experiments keep them alive? Find out next time!

One thought on “Tomb of Annihilation Session 41 Recap”