After a long journey through the dark tunnels, the party meets Musharib’s sister, Sithi, and the last remaining Albino Dwarves. They’re in bad shape, and implore the party to help them retake Hrakhamar from the firenewts.

Musharib helped diffuse the situation when he recognized his sister, Sithi. She had lead many dwarves down the tunnels when others fled to the surface, and had been surviving down here, running guerrilla raids against the firenewts.

Unfortunately when the kobolds moved into the mine to worship the dragon, they pushed back the dwarves’ territory, forcing them to collapse the mine. 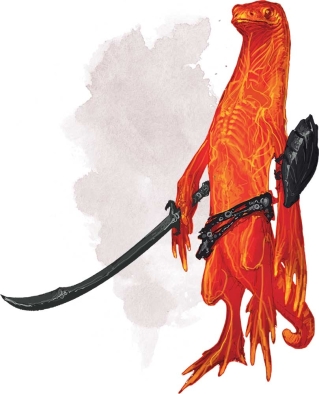 Therin used half a dozen spell slots to cure the most injured dwarves, while Sithi told them as much information as she knew about the forge and the firenewts. They were organized, militaristic, and loved fire. They were using the forge to make weapons and armor, but hadn’t yet broken into the dwarves’ sacred treasury. Sithi mentioned they had been taking live prisoners when they could.

Sithi sent the party on their way with a pair of her healthiest dwarf warriors, while Musharib remained behind with his people.

The PCs traveled the last several miles to the forge. They felt the heat first, then saw the light from the flowing river of magma. The mine cart track split to the north and east, but the northern bridge was guarded by a firenewt mounted in a large beaked dinosaur-like creature. Red-hot prison bars held the crumpled forms of albino dwarf prisoners, but the PCs stayed clear, opting to go east into the dark tunnels.

Therin’s Pass Without Trace spell was instrumental in sneaking past a posted guard, with every single PC save Khaless rolling below a 10 on their stealth check – and that’s with advantage thanks to Khaless acting as a spotter.

The eastern path wound in three different directions. Stairs to the south led to the surface. A smoke-killed cave to the east obscured all vision. The mine cart path turned to the north, crossing another bridge over the lava river, with more nearby posted guards.

Therin and Khaless explored the smoke caves, with Khaless failing a CON saving throw and suffering a point of exhaustion. A pair of mischievous smoke mephits pounced and attacked, cackling gleefully, but the two PCs were able to quickly fend them off. Before Khaless dealt a vengeful killing blow on the second mephit, it squeaked out a plea to spare its life. She was amused, and agreed, leaving the tunnels as a dead end.

The only way forward was crossing one of the two bridges north. After much deliberation, Mannix and Khaless combined their abilities, with Mannix using a Scroll of Hold Person while Khaless used Darkness on the nearby guard.

Mannix actually failed in his ability to cast the spell scroll, but the Darkness spell was key, essentially turning off the lights around the guard. It’s suspicious but effective, as the party quickly (though still stealthily) moved across the bridge. Khaless then cancelled the spell, prompting the guards to raise some concerns, although not the alarm.

The PCs were now confined in a tight tunnel that wound toward the west before opening up into the smelter, which was a flurry of firenewt activity. A pair of guards were sent to check out the raucous, with one guard entering their tunnel.

The party wasted no time. They used an effective combination of their abilities to stealthily take them out: George’s Vine Whip sword to pull them close, Therin and Khaless attacking and knocking them unconscious, and Mannix using Mage Hand to muffle any cries. Gillian than stood over them and used her Mantle of Whispers to capture their shadow.

Somehow the party made it far into the forge and only roused the smallest of suspicions, and now may even have an interesting advantage. Next week we’ll find out how they utilize it!

One thought on “Tomb of Annihilation Session 51 Recap”