The party braves teleporting statues, chaotic winds, and horror-curtains in their quest to collect all 10 crystal eyes.

The third level of the Tomb of the Nine Gods is proving the largest. It also features its own key-seeking side quest in the form of ten crystal eyes, prompting the party to explore each and every room to open a mysteriously large door.

After expertly shoving the iron guillotine aside, George and the party crawled through the tunnel to emerge in another corridor spanning east to west.

To the west, light spilled out of a hole in the floor where the corridor narrowed. Mannix sent his frog to investigate, discovering the weird drum room that Khaless had seen through the magical window when assassinating the tomb guardian by the lever.

To the east, George crawled through yet another small crawlspace to emerge over a vast empty chasm, with a lit balcony nearby. For the first time, George transformed Moa’s staff into a giant snake, and used the snake as a makeshift bridge to get across, with the others following behind.

I had updated this room to show nothing but blackness stretching between two balconies on either side. The western balcony the party was on held an iron lever, but nobody wanted to pull it. Instead they checked out the nearby stairs that ran to an obvious secret door to the west, discovering a room with a pit flanked by two statues.

Before they fully left the chasm room, George used his flying monkey Thaddeus to flip the switch, summoning the howling winds. The winds caused some mental anguish to the poor monkey as it returned to George, while Mannix’s familiar was struck unconscious and tumbled into the darkness. The party nope’d out of that room for now. 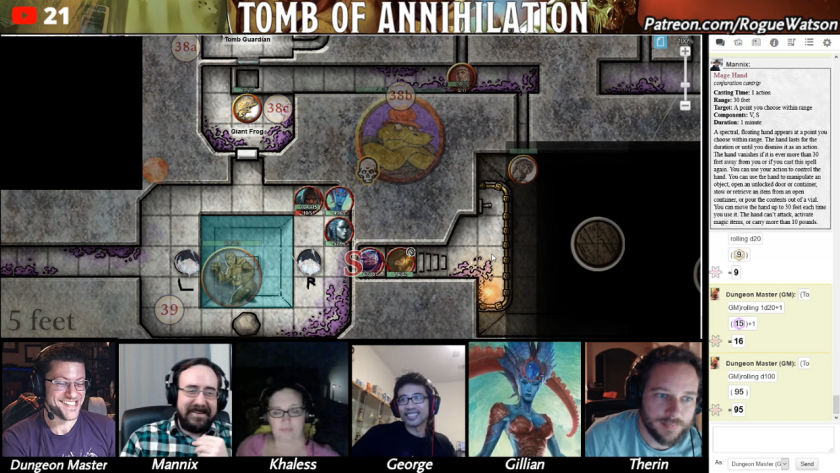 In the pit room they recalled the clue “Right the Gods,” and saw that both statues could be rotated. A third plinth stood empty to the south. In the 15-ft deep pit stood a clay statue with a key necklace and a treasure chest.

I didn’t think much of this room in the planning stages, but while running it with my party, it became one of my favorites. I loved how they logically worked through the trial and error of what the statues do – one of them teleports a creature on the empty plinth into the pit, while the other teleports a random creature from the pit onto the plinth. A magical forcefield prevents any interaction to anything in the pit from above.

The initial experiments included Mannix’s poor frog getting sent down to be pummeled by the animated clay golem, while Khaless received an equal beating when the golem was sent up, before teleporting it back down (Khaless also got off her first use of the Wand of Wonder, zapping the golem with a lightning bolt).

The party devised a plan to Mage Hand the key off the golem and quickly send it back down before it could animate. Then George used Moa’s power to turn invisible, popped down into the pit, opened the chest, and used his Cape of the Mountebank to teleport back out, without having to risk the golem getting out again. Nice work!

Inside the chest were two more crystal eyes, bringing the party’s total up to seven.

Therin went down the western corridor to find the large eye door with the ten indentations surrounding it. They found the door that needed the crystal keys, now they just needed the last three.

Mannix used Blindness/Deafness to deafen himself and return to the windy chasm room. Without being able to hear, he was unaffected by the screaming winds. He noticed a platform had floated up from the darkness, appearing to hover in place. Across the chasm he could see a fiendish statue. Its clenched fists had opened, revealing two gems in each hand.

Jumping normally doesn’t require a skill check, but Mannix only has a STR score of 10, and the first platform was 15-ft away. He was prepared to try and make a dicey Athletics check (and Papazotl makes him immune to falling damage), but George offered his services as the only 15+ STR party member.

But then George remembered Thaddeus. The monkey had recovered from its earlier chaos-wind affliction, and Mannix cast Deafness on it while George instructed it to fly across and grab the gems. The uplifting winds didn’t seem to bother the monkey as it flew across, snatched the gems, and flew back. Thaddeus MVPC!

Nine crystal eyes, one remaining. The party remembered there were at least two rooms they hadn’t explored back in the first area, when they took off after Yakka the skull. They returned to that initial corridor where they had fought the chained tomb guardians.

First they headed north into Kubazan’s tomb, looking at the frescoes and deciphering the ritual. With a little help from Orvex, including Khaless slicing off his damn finger (!) as a blood sacrifice, they successfully performed the offering ritual, opening the sarcophagus. As the only party member without a trickster god, the party had Gillian reach for the bracers inside (Rachelle was absent again). She made the CHA save, however, suppressing the god’s possession.

Mannix stood firm against the Fear effects of the third curtain. Ducking beyond it he he stood face-to-face with a severed boar’s head hung on the wall. Despite having advantage thanks to Papazotl, he failed the WIS save, placed his head in the boar’s head, and felt it chomp down.

Thankfully for him he was at nearly full health, resulting in a nasty wound rather than decapitation. He used a portent die to succeed afterward, and was able to grab a crystal eye lodged in the beast’s mouth.

Ten crystal eyes! The beleaguered party returned to the Vault door to unlock its secrets.

One thought on “Tomb of Annihilation Session 78 Recap”