With the release of 2015’s D&D 5e campaign Out of the Abyss on Roll20, the full 5e catalog is now complete. By combining an Underdark escape with a demonic invasion, the storyline bites off a bit more than it can chew, and I’m not a big fan of the drab map art. But Roll20 comes through with hundreds of character sheets, tokens, macros, and some helpful new maps to make the Underdark adventure as user-friendly as possible.

The following content is included in the Out of the Abyss Roll20 bundle:

During our one year anniversary DM Roundtable last month, patrons and I ranked the 15 hardcover 5e campaign books released in the last six years. Out of the Abyss was in the bottom half, at #10.

The Underdark is a wacky, uniquely D&D setting of underground cities, vast tunnels and chasms, and legions of classic D&D foes like drow, beholders, and illithids.

The story begins strong – if you’re okay with stripping your new PCs and sticking them as slave-prisoners in a drow outpost and saddling them with a ton of weird NPCs. The escape angle is a good one, taking them through the Underdark’s greatest hits while witnessing increased demonic activity.

Halfway through the party escapes – huzzah! Only to be told to go back down and deal with the whole demon-invasion thing.

It’s a lot for a DM to handle. We do get full-color maps, but they’re brown, brown, and brown. Not particularly inspiring. At least half of them are the wrong size, a problem that plagues a lot of D&D 5e’s early adventures. The 25-ft and 20-ft maps are almost unusable in Roll20 given how tiny the tokens become, as Roll20 has to resize all the maps with 5-ft subdivisions.

However, props to Roll20 for providing five new appropriately themed maps for use in random encounters: caverns, city, lake shore, platforms, and shrine. Usually we get a single blank page as a “random battle map,” but here we get five full color maps that showcase a better art style than the ones in the book, with dark purple tunnels and bright green bioluminescent mushrooms.

These new maps are perfect for chapters two and three, as well as the large number of encounters that parties can stumble upon while traversing the Underdark. Big thumbs up!

The adventure also includes over 250 character sheets with linked tokens that can be dragged from the journal, or copied and pasted from the token page. I was impressed with the number of art on the tokens; rarely did Roll20 have to go with the name-instead-of-picture route due to not having an original image.

Most of the drow tokens are set up as multi-sided rollable tokens with eight different sides, allowing you to change a drow spy or noble into multiple tokens while keeping the same linked character sheet. It’s a great idea to either diversify your drow tokens and/or obfuscate the abilities behind them, in case your players are meta-gaming the token art.

One odd oversight I noticed with character sheets: although we’re given all the matching player art handouts, I didn’t see any links to the handouts in the bio section of the sheet. All previous Roll20 5e campaigns had this feature, and I’ve used it a lot in our current campaign. Being able to shift-click a token to bring up the sheet, click on the handout link, then share the art handout for my players is an excellent convenience, but here I have to dig for them in the player handout section of the journal. 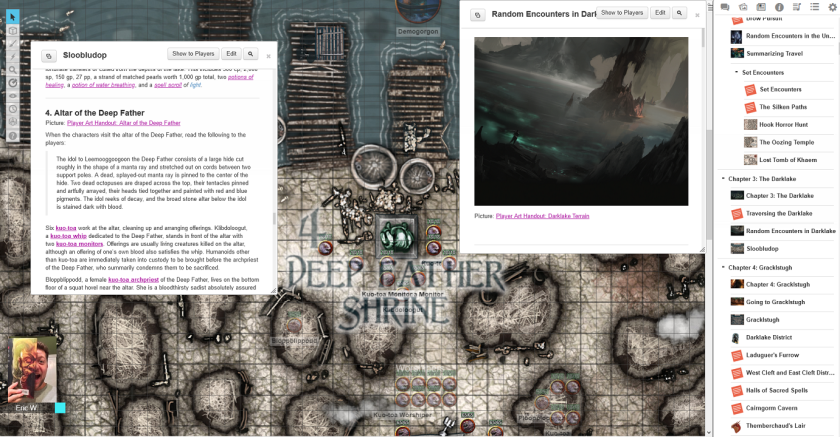 For other helpful tools, Roll20 is increasingly great about providing built-in rollable tables and macros. In the Macros tab there are rollable tables for every single table in the campaign book, including random encounters and new character bonds, as well as magic item tables for treasure and other important tables like wild magic surges and madness.

The more advanced macros include rolling for situations around Velkynvelve, Underdark Travel, and keeping tack of the drow pursuers after chapter one, all of which whisper to the GM by default but can also be modified if you know your way around Roll20’s macro system.

Out of the Abyss isn’t my favorite 5e adventure, but the Underdark is always an enticing setting. The Roll20 module does a fine job taking poorly scaled maps and trying to make them work, while adding their own welcome additions and helpful tools.

The Verdict: OUt of the Abyss bites off more than even a demogorgon can chew, but Roll20’s additional maps and rollable macros are a huge help in running the Underdark adventure.