The deepest depths of the Tomb of the Nine Gods reveal the horrific secret behind the Soulmonger.

Twenty-three months and 85 sessions later, the party has made it to the final showdown with the Soulmonger, the Atropal, and the archlich himself.

Following the Sewn Sisters battle, the party was able to Short Rest and level up to 11. They inserted the skeleton keys into the gate, waltzed down the stairs, and entered the incredibly cool final boss arena that is the Death God’s Nursery.

A giant undead fetus-god floats next to a large glowing cylinder full of souls. The Soulmonger was drawing in souls to feed the undead monstrosity.

I included a cutscene with some backstory about Acererak finding the titanic creature and creating the Soulmonger, as otherwise it all comes out of nowhere.

Then the creature wailed, which forces a DC 19 CON save or gain a level of exhaustion. My party has exceptional CON saves, but had to make the save every single round.

The wraiths were incredibly powerful, rolling 20+ on attacks and often way above average damage (~30)! More importantly, they drew focus away from the Soulmonger and the Atropal. No one was prepared to walk out on the narrow struts above the lava to confront it. 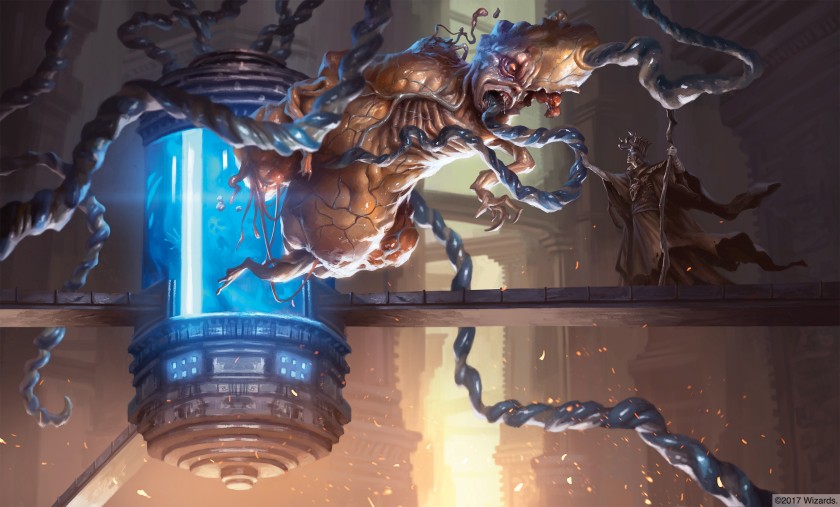 Khaless pointed her Wand of Wonder at the Soulmonger, firing off an effective lightning bolt. The Soulmonger has four tentacles that respond to attacks, and one of them picked her up and threw her into the lava. Let’s get this party started!

With a fight that lasted over three hours and multiple summons, it’s difficult to effectively recap everything that happened. I’ll attempt a semi-chronological rundown:

Gillian casts Call Lightning to continually blast both the Soulmonger and the Atropal with lightning bolts. Shockingly (wee!) the Atropal makes almost all its DEX saves despite an abysmal -3 modifier.

Mannix uses Otiluke’s Resilient Sphere to save Khaless from melting further into the lava. She hamster ball’s around the lava pit.

Therin pounds on some wraiths, takes a lot of damage, then wildshapes into a Fire Elemental.

George uses his Cape of the Mountebank to teleport inside the Soulmonger. Not exactly something I prepared for! He has disadvantage to do anything given the soul spirit juice, but is cleverly safe from the retaliating tentacles as he attacks the Soulmonger from within. A wraith spawns inside cylinder to wail on him.

Therin-elemental races along the struts to a balcony and dons the cursed Necklace of Fireballs, detonating a huge explosion, destroying tentacles, and dealing heavy damage to the Soulmonger and Atropal.

The party focuses on the Soulmonger. The Atropal uses its Life Drain to deal damage and keep itself healed. The necrotic aura stymies the party, as they’re unable to use any of their healing spells or skills.

Finally the Soulmonger cracks apart, the tentacles blacken and wither, and the souls are free. An irate Acererak shows up on the south balcony. The Atropal is still at least 60% health.

Acererak uses Legendary Actions to cast Magic Missile at 3rd level (I also gave him lighting bolt, but tricky to fire that off without hitting atropal). He uses the sphere once but as many others have said, it sucks compared to his spells.

Therin-elemental jumps down into the lava, scoops up Khaless, and tosses her up to Acererak’s ledge. Ace responds by Misty Stepping away to another balcony.

Mannix drops the Sphere and Khaless uses the Wand of Wonder. Grass grows around Ace’s feet.

Ace casts Time Stop, uses Animate Dead to summon a pair of minotaur skeletons in the alcoves, uses Invoke Curse on Mannix, and casts Circle of Death on everyone.

George, still fighting the wraith that was inside the cylinder, tries to escape without disengaging. The wraith rolls a crit on its Attack of Opportunity. Down goes George.

The party finally remembers they have powerful summons, and now is not the time to hold back. Gillian summons Keshma the dao, who races forward to begin wailing on the Atropal, dealing 40 damage every round. This entire battle would’ve been much different had they summoned her from the beginning.

Acererak fires a Chain Lightning spell at Gillian, Mannix, and George. Was this before or after George went down? Things are getting difficult to track. Gillian goes down at some point to a combination of Ace’s spells and the minotaur skeletons.

Mannix summons a pair of Terracotta warriors with the magic horn, to help shield him from the minotaur skeletons.

Therin-elemental is stuck in the lava 30-feet down, but I let him race up a destroyed tentacle. He then leaps on top of the Atropal to deal fire damage. A round later he loses his wild-shape from… something, but he’s still on top of the floating death god.

Instead of rolling Death Saves, George’s god Moa emboldens him with the last of its divine power, giving him 100 temporary hit points, but fading away in the process. George Vine Sword whips Ace into the lava!

Ace Misty Steps out of the lava. Therin summons a pair of Allosaurus on the balcony next to him, and Ace Misty Steps again to the south balcony, right next to Kahless. He paralyzes her with a touch, but she shakes it off at the end of her turn.

With Ace further away, the rest of the party focuses back on the Atropal, and finally begin attacking with actual attack rolls instead of spells, realizing it has a crap AC.

Keshma proves invaluable by continuing her 40-damage tirade on the Atropal, though it’s Therin that gets the final killing blow with a proper bonking with his Staff of Striking.

At this point every party member has between 2-3 levels of exhaustion. Did anyone have four? Some were technically unconscious during the wailing (the god-temp HP gain didn’t kick in til their next turn). The DM doesn’t even try to track the PC’s exhaustion levels.

Acererak is furious and casts Disintegrate on Therin, who fails the save. He’s dusted! Except his god keeps him alive, same as George (and Gillian). The DM is merciful (and may have over-tuned this fight a bit).

Seeing the party divinely powered by the vengeful Omuan gods, Acererak decides to bow out (and Eric is running out of energy/brain matter). He attempts one last Paralyzing Touch on Khaless, but she makes the save (damn, he would’ve dragged her away!).

The Soulmonger and the Atropal were destroyed. Thanks to their trickster gods, the party survived. The portal Acererak left could also teleport the party back to the entrance of the dungeon (I’m not running any of the post-boss rooms). But those that still had gods were bound to the dungeon, and their associated magic items crumbled away.

Next week we’ll get together for an Epilogue and Recap session, where we’ll enjoy reminiscing about the last two years of this epic campaign, as well as announce what’s coming next.

One thought on “Tomb of Annihilation Session 86 Recap”