The party survives an ambush and takes on the leader of the Crushing Wave cult with help, then betrayal from their lizardfolk allies.

Holy crap my players are powerful. Like Polymorph the captured rogue into a giant ape that kills everything, powerful.

D&D’s always had a weird balance that revolves around attrition. Creatures are given a Challenge Rating and DM’s have a tool to calculate how to make encounters Easy, Medium, Hard, and Deadly depending on the type and number of enemies.

But that assumes a “well-rested party.” Much of the challenge of D&D comes from fights taking a gradual toll on the party’s resources. It was a tricky balancing act, particularly in dungeons.

5E lets the party Short Rest to recover some abilities. If the party does that right before a major boss battle, they’re sitting much prettier than an otherwise easy or medium fight that’s at the end of a long string of encounters. See for example the near deadly fire elemental encounter near the end of Scarlet Moon Hall.

For this week’s session the party tackled their biggest boss battle to date – the leader/prophet of Elemental Water Gar Shatterkeel, and suffered nary a scratch. I even threw an extra force of reinforcements at them, AND had their lizardfolk allies turn on them afterward.

The PCs defeated them all.

Let’s back up. The PCs Short Rested after the coerced mass suicide poisoning from last week. Last time they Long Rested in a dungeon (which was probably too generous on my part) I had reinforcements hunt them down. Same thing happened here, but this time a Crushing Wave Priest and four bugbears were waiting just outside their door.

They sprung the trap perfectly. The Priest cast Hold Person at Level 3, paralyzing both Miri and Kalinaar. I had the bugbears grapple and drag them out of the room. The idea being they wanted to capture and take the PCs to Gar instead of trying to murder them outright. My clemency would prove my undoing.

The priest offered to accept their surrender, but Talus had a never say die attitude and Kethra knew if she spoke it would just make things worse (heh). So a fight broke out, with half the team paralyzed.

The bugbears got some vicious hits on Talus’ new zombie, Tim, as it tried to leave the room. His Undead Fortitude saves his (un)life and that would be the most exciting thing to happen all night from my end.

Talus launched a Hypnotic Pattern AOE on the group. Every bugbear failed their save spectacularly, while Talus used a divination die to force the Priest to fail as well. My entire force was incapacitated. 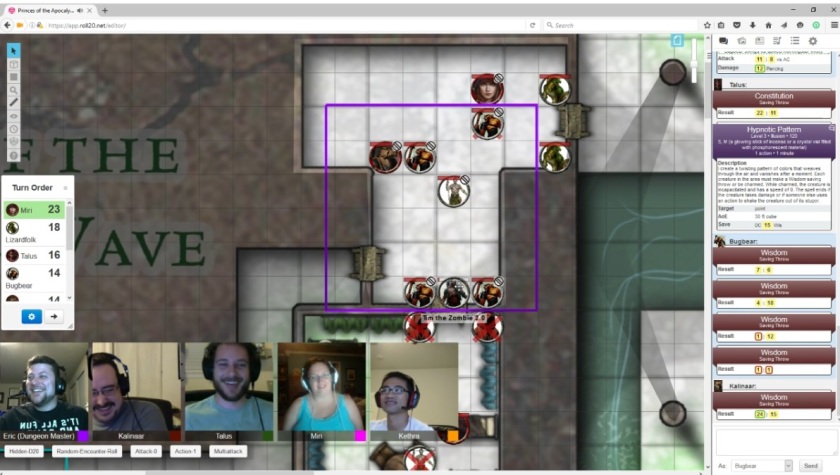 There were also a pair of lizardfolk guarding the door to the temple. My plan was to have one of them be part of the tribe that the PCs made the deal with – he had infiltrated the lizard dudes loyal to Gar to find the PCs. It allowed for an interesting bit of role-playing in the middle of the fight as the players eventually figured out what was going on.

The enemy forces were quickly slaughtered, and the allied lizardfolk told them that King Drexa and company were lying in waiting in the nearby temple. Note to self: always have names ready for NPCs. I’m terrible coming up with names and I frequently use random NPCs for dialogue (or they end up getting Charmed).

The party waltzed in and had a brief little chat with Gar, the elemental prophet of the Crushing Wave. I inserted a bit of Gar’s backstory into the conversation. I love that the campaign book provides lots of material for the cults and the prophets themselves. 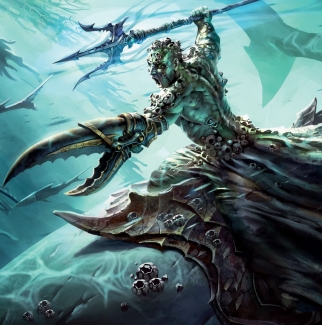 The PCs didn’t want to become Gar’s lackey and fight the other cults on his behalf – plus they had a sneaky lizard army on their side.

Even without the lizards this fight wasn’t going to be terribly difficult, despite technically being a big boss battle. Gar isn’t super powerful. All his spells are DEX-based and my PCs are super good at both DEX saves and Evasion skills.

I wanted to use some more unconventional tactics with Control Water, but Talus shut it down with Counterspell. Talus has pretty much been the bane of my existence combat-wise. Wizard spells break the game in various ways; a well-rested wizard is a terrifying force to behold.

That would prove doubly true in this fight. Kalinaar and Kethra engaged Gar in melee while his lizard guards ran North to join in. Then Drexa’s army emerged from the channel, and a truly epic fight was on.

Gar wasn’t really a match for the PCs at near-full strength, and certainly not when the Lizard King joined the fight. He did manage to grapple Kethra with his spiffy claw arm and drag her over to the water.

Then Talus turned her into a Giant fucking Ape. 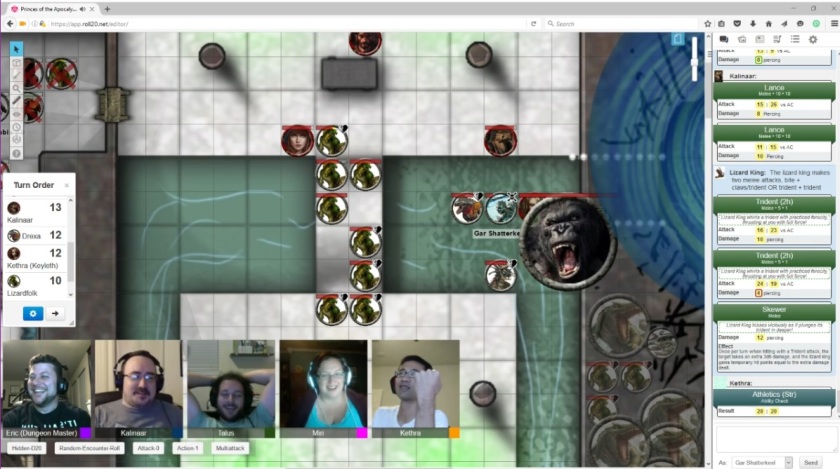 Polymorph is quite the powerhouse, able to both shutdown an enemy or buff an ally. It’s limited to beasts of the same level as the PC, but some beasts are insanely powerful. Like the CR 7 Giant Ape with its 150+ HP and 7d6+6 “throw rock” attack.

Kethra-Ape grabbed Gar and shoved him back on land, where he was quickly defeated by the party’s combined forces. I think I got one little Tidal Wave spell off, which knocked the Giant Ape over (allowing her to see the hidden underground tunnel to the treasure room to the East).

Miri and Drexa both made a grab for the magical trident when Gar melted into a pool of water. I’d played up the trident as a powerful artifact, recalling Talus’ own prophetic nightmares back when the campaign first started. Talus used his final divination die to ensure that Miri grabbed the trident.

The elemental weapon is indeed powerful, and dangerous. The PCs didn’t have time fully analyze it, though Miri was pleased to wield it against the rest of the lizards.

I had a brief moment of revenge when the lizard shaman summoned four Crocodiles to attack Talus (thus trying to shut down the frightening Polymorph). But Talus used his Dust of Disappearance that he’s been hanging on to since Level 2. Then the Giant Ape came over and OHKO’d my shaman. 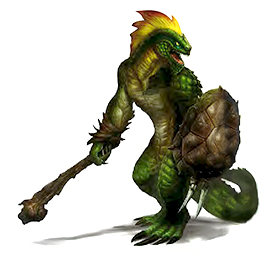 The rest of the lizards fell quickly afterward, with one getting stunned by Kethra-Ape and dragged over to our named friend (Oakan) who had met them in the previous battle. After a Persuasion check, both of them dropped to their knees and swore loyalty to the new wielder of Drown.

So, a pretty anticlimactic boss fight despite my best efforts. The lizard force was a neat addition that made things a bit crazier, but everyone went down ridiculously easy and the giant ape was just icing on the cake. A cake made of my tears.

Honestly as long as everyone’s having fun, I’m okay with getting my ass kicked. On occasion. At some point I do worry there’s not enough challenge and things will become boring. But the party still has the rest of the temple to explore (if they want) not to mention access to a number of other places. They entered the air temple first but defeated the water prophet before the others. Interesting! They’ve also retrieved Bruldenthar’s books, and it’s been some time since they’ve returned to the surface.