We overcome some terrible technical difficulties to take down a giant stone golem and a plaza full of air cultists.

Normally in a tabletop setting of D&D you don’t have to worry about technical difficulties. In an online environment with webcams and recording, it’s a different story. Things had been smooth sailing for awhile so I suppose I was due for a catastrophe of a session last night.

I won’t get into the details but essentially I had recently acquired a USB wireless adapter. Apparently that overloaded my USB ports and they began shutting off last night – turning off my internet, webcam, mouse, keyboard, etc.

This managed to destroy my recording of the first 15 minutes of our session while I dealt with these issues. Rather fortuitously we spent most of the beginning going over some new rules changes in our house rules, so we barely lost any actual adventuring time.

Unfortunately, and I’m incredibly embarrassed to admit this, I had turned off my mic in OBS (my recording software) while trying to diagnose the problem. And of course I forgot to notice it was still off when we came back on. We proceeded to go through an hour’s worth of D&D, and only when we took our break did I notice it was off. DAMN IT.

Anyway, I was able to fix things by unplugging several USB items. I will be promptly ordering an AC-powered hub today. The important lesson is to try not to get frustrated and keep a level head. I’m fortunate that my friends/family are very understanding and patient. And hey, everybody hates PC problems.

Despite all this we did actually get a little play time in. My players surprised me by deciding to go after the giant dwarven stone golem who patrols the bottom of the now-emptied moat in the Temple of Howling Hatred. The golem didn’t pose a threat if they stayed out of its range – but they saw a challenge and had to overcome it.

I enjoyed their wacky tactics. Talus cast Haste on Kalinaar, who began the fight by attempting to leap onto the golem as it passed near the bridge. He failed the skill check, and went tumbling down 20 feet. Ouch.

Miri tried next and was successful, but on the golem’s turn it used its action to shake her off. Her Monk Slow Fall came in handy then. 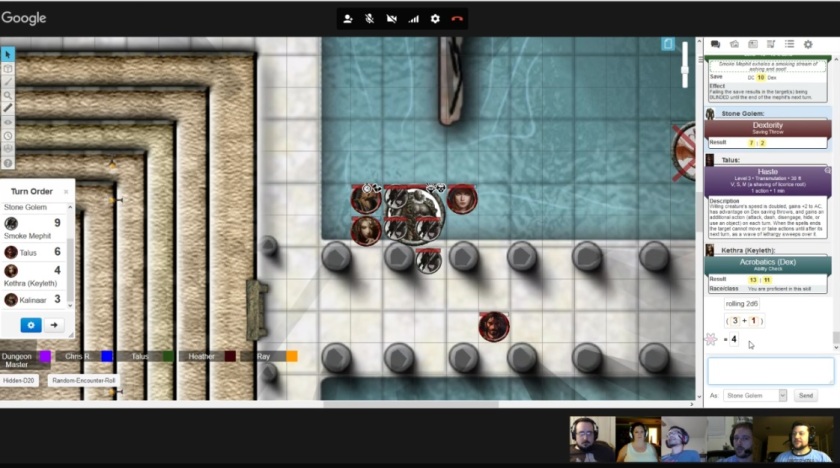 Things might’ve turned dire except for an ace up their sleeves – the Smoke Mephit pipe Talus had taken from Elizar at the Scarlet Moon tower. He puffed away, and I enjoyed the bit of flavor text that described Talus as trying to look cool but ending up choking and coughing, hehe.

The Smoke Mephits were actually incredibly useful, breathing their Cinder Breath every single round to keep the golem blinded, while the rest grappled on top of him.

More importantly the mephits served as distracting targets for the golem, who’d also been Bane’d by Kalinaar. So to recap, he had disadvantage and had to roll a d4 and subtract that from his rolls. Hitting things proved difficult. Oh, and since he was Blinded I couldn’t use his Slow ability at all!

Since the mephits were grappled/climbed on top of it, I used the golem’s turns to hit them instead of the players. In the end it could only kill a single mephit, while a hasted Kalinaar did 59 damage in a single round at one point (Crit gives an extra Cleave attack, ouch).

The gigantic CR 10 Stone Golem went down in a whimper. The floor of the moat ended up doing more damage to the PCs than the golem (Kethra attempted to jump down and also failed the roll – hello 20 ft drop!). Given the PCs’ inventive tactics I was more than willing to reward them for their efforts.

Instead of turning to the pyramid the party decided to explore around a bit more. I let them loot the bottom of the moat by each rolling a 4d25 and finding that many gold pieces. Miri also grabbed that platinum, ruby-encrusted goblet that Kethra had spotted last session. The rest of the party greedily warned that it should definitely be split up when sold.

They decided to head North. A plaza with a giant dwarven statue welcomed them, along with a smattering of air cult denizens. Juggling multiple types of foes is kind of a chore, as I have to constantly switch between several different windows.

Talus nuked half the force in the first round with a Fireball (the party had Short Rested under the bridge near the defeated golem). I actually made the save for 3 out of 4 rolls, but initiates and kenku have shit for HP and even half damage killed them outright. Talus then smartly drank a potion of lighting resistance.

Air guys do love their lightning damage. I had the Skyweaver launch a Lightning Bolt down the hallway, hitting three of them. Talus made the save which means he took only a quarter of the damage. The Hurricane, an air monk, also ran down to clap ’em with Thunderwave. The party took some decent damage but emerged victorious.

They’re a bit worse for wear and they already Short Rested once. The golem gave them the final XP push to get them to Level 7. However our house rules state that they need to Long Rest before leveling up, and preferably at the end of a session so we can all prepare for new abilities/spells/etc.

They’ve gone through entire dungeons before with the video game equivalent of “Level Up!” flashing on their screens. We’ll see if they decide to back off and rest/level or continue to explore the air temple. Also next week’s session will hopefully be free of errors and back to normal!