We travel to Yartar to recover an elemental orb from the Black Market; Talus’ past catches up to him.

We dive into another official side trek this week, and one of my favorites from the “Princes of the Apocalypse” campaign book. Dark Dealings in Yartar features some fun role-playing opportunities in an urban setting that we rarely get to explore, culminating in a big brawl in a graveyard.

Of course I also used the opportunity to add an additional NPC from one of my PCs’ past. Given the smaller, more contained story-telling in the side treks it’s much easier to mold them into my players’ backstories.

This week, Talus’ shady past as a former Red Wizard puts them all in an extra bit of danger.

It worked out that the PCs were decently close to Yartar at the end of last week’s cloud giant beating. I fudged a bit and let them use the Bead of Windwalk to make it to Yartar after only a Short Rest. Windwalk helps eliminate travel concerns and speeds the whole process along nicely.

I’ve made it known that I’m pretty much done with random minor encounters. They’ve been all but replaced with specific cult reprisals and attacks, which have been much more satisfying from a story point of view.

The party arrived in Yartar and I attempted to give them freedom on how they wanted to proceed in locating a Devastation Orb on the black market. Their only clue was an organization called The Hand of Yartar. Talus rolled a critical success on his History check, so he quickly learned all about the thieves guild of Yartar.

Some RPGs groups may relish waltzing into a new city and doing whatever they want, but my players prefer to have some scripted events take place that they can react to. I knew where I needed them to go – The Wink and Kiss bar (though the description sounds like a strip club or at least a Hooters).

We had a bit of fun with Kalinaar trying to do his Kalinaar thing and shouting at people (and breathing fire into the air), which nearly got him arrested. It did make them stand out even more, and a member of the Hand quietly approached Kethra and directed her to the bar where they could meet with Nareen, the seller.

Since I didn’t have any visuals for Yartar aside from the battle maps, I went ahead and switched to my tavern map, even though it’s very possible to not have combat here.

We had a bit of fun discussing the orb and haggling on payment. In the end Miri offered up the sapphire gems she’d gotten out of the House of Reeds quest. Before Nareen could accept them, a crossbow bolt whizzed out of an open window and nearly ended her life.

At first I was sorely disappointed in my players. They were keen to simply stand around and shrug and watch as this character died. It wasn’t a nice character or even a “Good” one in the D&D sense, but still.

After some admonishing from me, Miri stepped in to stop the blood flow and use a healing potion, while Kalinaar told the guards to back off and that it wasn’t them trying to attack. I’d hoped the scene would’ve played out better, but you can never tell with these things.

The party had two options with getting the orb – save Nareen’s life or chase after the assassination. They later admitted they didn’t even realize the second one was an option, so I’m glad I pressured them into saving Nareen! She was grateful and gave them the location of the orb, warning them that clearly others were interested in it as well.

They arrived at the Yartar cemetery. The orb was tucked away in a random crypt, and already several shady looking characters were trying to get inside.

I adjusted the campaign book’s encounter slightly to include a Red Wizard from Talus’ past, and her loyal pet Clockwork Hound. I was totally guilty of the cutscene trigger; the party attempted to surprise the enemy but I really wanted this lengthy dialogue scene to go off before a fight (thankfully they tripped the Hound’s alarm at the same time).

The mage, Shaundra, had visited the Old Owl Well to check up on Hamun Kost, an NPC from our “Lost Mine of Phandelver” campaign, and a character a tied into Talus’ past. She wasn’t pleased, but she’s also more practical than emotional. She was willing to have the PCs pay up to dismiss trying to bring Talus back in dead or alive.

But the kicker she wouldn’t flinch on was keeping the orb, and the party wasn’t about to let her do that. Ah so now you’re going to be heroes with scruples, eh? 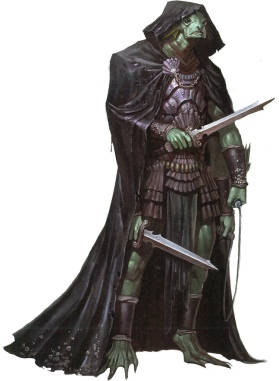 Shaundra was a powerful 10th-level mage (using the Mage stat-block from the Monster Manual), along with Ghald a four-armed Sahuagin assassin, a pair of Veterans, and the Clockwork Hound (a neat little CR 2 construct from the Tomb of Beasts). I expected a much more challenging fight that the originally written battle.

But hell hath no fury like a well-rested party.

Ghald got some nasty damage off on his first Assassinate turn, but Talus was able to shut down most of my first round with a Hypnotic Gaze.

We had to look up the rule for Counterspelling Counterspells, an annoying back and forth that happened at least twice and prevented my mage from casting all but one spell. Talus would be drained of spell slots, but my fancy mage was almost completely shut down.

Kalinaar rushed into the crypt to fight the veterans, Kethra retreated from the Ghald-thrashing, and Miri went to take her place. Talus used his next turn to Polymorph Kethra into a T-Rex, and it was soon all over for me. The T-Rex ran up and killed both Ghald and Shaundra effortlessly, while the rest cleaned up the scrubs.

Usually when the PCs fight they ball up and take advantage of flanking attacks, but here they spread out. Not only did that screw up Shaundra’s AOE spells (I got only one spell off with her, and I chose to Blight the T-Rex) but Ghald couldn’t gain his Rogue advantage/sneak attack abilities. Well played, you bastards!

I liked this side trek a lot. It offered a neat little story nugget that I could expand on, and a satisfying final battle. I’d put it up there with the Curse of the Fire Witch (halfling ranch, Uthgardt barbarians, ghost-chief) in my favorite official side treks from the “Princes of the Apocalypse” book.

Now the PCs have an orb to deal with, a main quest to return to, or a few more side quests to tackle as we approach the late game sections of “Princes of the Apocalypse.”