We deal with a powerful new threat who seeks to rebuild the air and water cults.

The way “Princes of the Apocalypse” is structured, it makes sense to bundle the various cult attacks and side treks together. The PCs end up delving into the multi-dungeon sprawl of elemental evil for the main quest. Then when they surface I can throw a bunch of additional content at them to flesh out the story, the world, and incorporate their own character backstories. It’s been a lot of extra work, but also a lot of fun.

This week we tackled one of the more interesting cult reactions from the Wrath of the Elements section of the campaign book.

One of my favorite aspects of this campaign is how many ideas and events are set to trigger by the PCs after accomplishing various milestones in the main quest. I’ve had to slightly adjust the timing on some of them to make them work, but Haayon the Punisher came at a perfect time.

The party had previously defeated the Prophet of Air and obtained Windvane. That makes two prophets down, but Drown, the elemental weapon of water, was missing. I wanted to have a bit of fun with the party based on their prior desire to get rid of it – despite the weapon being an important plot device.

They since learned of its importance but it and their old friend Sister Garaele had gone missing. I decided to incorporate this into the Haayon storyline, as the cloud giant seeks to rebuild and combine both the air and water cults after the defeat of their respective prophets. Sure it’s a little soon after Aerisi goes down, but the air cult was pretty much crushed before then anyway. 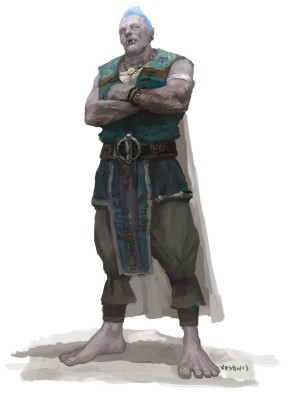 I was impressed that the party adopted a Take Me to Your Leader stance, instead of just charging in swords drawn. I got to have a bit of fun role-playing a haughty cloud giant, but inevitably things went sour, and a fight erupted.

I think it also helped that I hid the battlemap from my players until we rolled initiative. If you give someone a hammer they’re going to look for nails. Likewise if you show your players a tactical battlefield they’re going to start planning out their assault. Instead we got to have the role-playing exchange first and they had to rely on my descriptions to get a feel of the area.

They were a lot of dudes at Haayon’s camp. This was easily one of the largest fights we’ve had in terms of sheer number of foes. Things got awful crowded inside the little pavilion. But everyone save Haayon were low-ranking cultists whom the party have easily dispatched before, and the PCs were pretty much fully rested.

Miri began by knocking the cloud giant on his ass with Water Whip, and Kethra was able to snap Garaele out of her stupor with a Charm spell (yeah technically elves are immune to charm, and he even pointed that out, but whatever).

Garaele had brought Drown before Haayon, and he awaited the gift of Windvane. The PCs were of course unwilling to give it up, and began chewing through the low-level cultists.

This fight was a bit unwieldy in terms of juggling character sheets, but thankfully most of these guys were very simple to run. Talus proved the obvious MVP in the fight – blasting a Fireball in the middle of the pavilion.

Somehow they coordinated it where the Fireball didn’t hit any allies (except his zombie-ooze) and nuked about 10 of the enemy forces to instant death. T’Ooze simply melted away to reveal the zombie inside, unharmed. Back to Tim the Zombie!

Talus also got to play with his new Animate Objects spell, which gave him an insanely long turn of rolling multiple attacks and damage. The tiny nano-death things eventually took down Haayon along with repeated strikes from all the PCs, and the final few cultists laid down their weapons.

I did get some solid hits on Kethra and Miri in the battle, and Miri almost went down as she tanked against Haayon’s massive blows. It was a lengthy but fun fight, even if it was mostly a chance for Talus to wreck havoc and kill everything.

The party was able to rescue Garaele and recover Drown. I like that I could incorporate an important piece of the main quest into this little side trek.

Now the party can begin to work on sealing the elemental nodes and finding and defeating the remaining prophets. But first, a side trek to Yartar to recover a devastation orb may be in order.