We’re forced to improvise our tactics when a small force of Zhentarim mercenaries arrive in Nightstone.

As soon as he walked in the door I bashed him in the head with my staff. I can only imagine the look on his face. I was still disguised as their Zhentarim ally, Kella.

“We’re under attack,” someone shouted. Damn! I thought we’d been careful. The Zhentarim mercenaries stopped chasing their horses and drew their weapons. We still had one ace up our sleeve – Halfred in the windmill. One of the Zhents suddenly had an arrow protruding from his eye.

I grinned as I let the rush of adrenaline flow freely. The goblins had caught us flat-footed. This time we had surprise on our side.

This week I expected us to explore the Nightstone keep to the South. Instead we were given a rude awakening after our Long Rest (and level 2) – a small force of Zhentarim soldiers had arrived in town. Kella Darkhope, the Zhent agent we defeated in the Inn had mentioned their arrival, and we had to deal with this new threat.

It took us quite awhile to deliberate on how to handle this new scenario. Our discussions were compounded by the fact that only 3/5 of the group was there at the start, with others trickling in throughout the hour due to pesky real life. Our Skype solution is also a mess when people come and go; please forgive any weird webcam issues!

At level 2 my warlock received invocations, and I took Mask of Many Faces which allows me to cast Disguise Self at will. I figured using that with a high CHA, Charm Person, and Awakened Mind could make for some fun situations. I didn’t expect I’d get to use it right away.

I used Disguise Self to assume the form of Kella after Halfred scouted the newcomers and confirmed they were Zhentarim agents. Our group was still holed up the general store, fully rested. We could charge them but they outnumbered us seven to five. We needed some careful planning.

I stumbled out of the store with my disguise, and was greeted by their captain, an elf named Xolkin Alassandar who immediately expressed concern over his lover Kella. Oh crap! 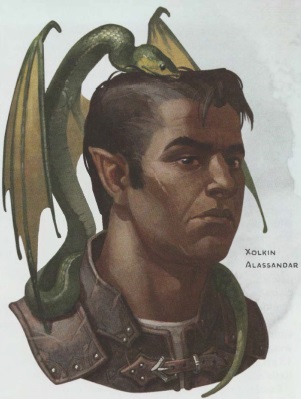 Improvising with the DM was a lot of fun, and I played Kella as I remembered, haughty and snippy. She explained the goblin looters, how she survived, and how a group of adventurers came through.

Without much of a plan I told him they headed South to the Keep. I also managed to persuade Xolkin to give up a nice Potion of Invulnerability thanks to my bedraggled state.

The ruse worked! They headed South and dismounted from their horses. They milled about the broken bridge deciding how to proceed.

Here we deliberated further. We wanted to separate them as much as we could and give us as many advantages in the fight to come. Halfred stealthily ran up the nearby windmill to settle into a nice sniper’s nest 35 feet above the action. Korinn suggested we spook the horses to sow chaos and see if that would split them up.

Bryseis used Thaumaturgy to create earthquakes and thunderclaps, and the horses panicked. Several of the Zhents ran around trying to corral them, including one running North close to the store. I decided to draw him into the building (still disguised) where I and the others unleashed a surprise round of attacks to quickly down him.

Unfortunately we weren’t quite as stealthy as we thought. The others spotted us in the store and the fight was on.

Halfred had an elevated perch where he could rain down arrows. More importantly he was a hard to hit target that conferred disadvantage on anyone trying to shoot up at him.

The rest of us attacked the Zhents that ran at us. I tried to keep up the ruse to draw them closer, particularly Xolkin. But the captain received an arrow in the shoulder from Halfred and ran up the windmill to duel it out in a climactic melee battle high up in the air.

We traded blows and fired off attacks up at Xolkin, who was a beastly CR 2 bandit captain with triple multiattack (at least he didn’t have his potion to drink!). Korinn missed several attacks in the beginning, then proceeded to decimate everyone with an awesome throat-grabbing Shocking Grasp. 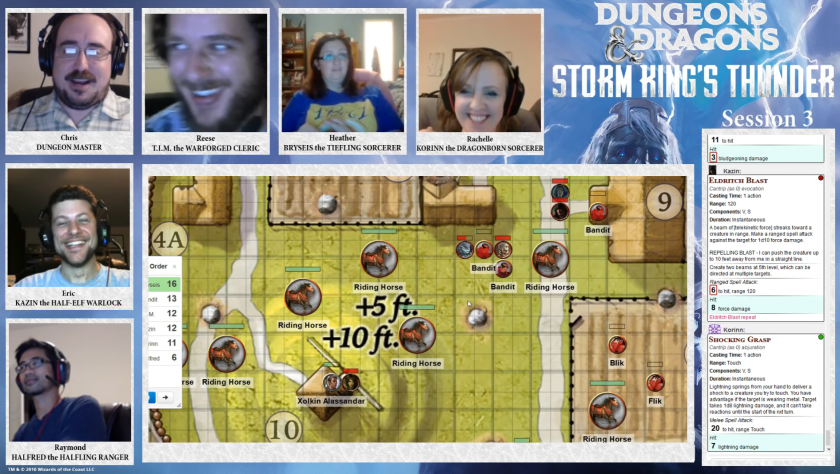 Halfred dodged a dozen attacks before a whirlwind of blades nearly downed him from Xolkin. Bryseis unleashed several Magic Missiles before Kazin ran up and cast Dissonant Whispers on Xolkin. The captain failed his save and began hurrying down the ladder. This incurred an attack of opportunity and allowed Halfred to deliver the killing blow with his bow. Talk about teamwork!

The last Zhent began to run away, and Korinn delivered a critical hit with max damage on her Ray of Frost, annihilating him in a laser beam of ice. Despite the large number of foes things went much smoother than last week. What a difference a level makes!

That one battle took up the rest of the session, and we ended after crossing the bridge and finally approaching the Nightstone Keep. I thought we’d end up exploring the entire keep this week, but I did enjoy the fun diversion with the Zhentarim, forcing us to improvise and plan battle tactics. I’m definitely going to enjoy being the mind-fuck Jedi warrior!