We defeat the invisible guardians of the tower and infiltrate the Cloud Giant Queen’s bedchambers.

The battle with the invisible guardians was irksome, but nothing we couldn’t handle. Our rewards were plentiful; we’d practically stumbled upon the treasure cache of the entire castle, or at least its Queen’s. But the real treasure we were after lie at the top of the tower.

The Queen’s bedchamber was breathtaking in its opulence. Our eyes were immediately drawn to the massive bed. Its wooden frame was ingrained with gold and covered in gemstones. Above it a group of stuffed pegasus circled, propelled by a magical wind.

We stared for a moment, then got to work searching the room. Our only clue was a ‘secret chest’ that the oracle had spoken of, but we were coming up empty-handed.

After some more unsuccessful searches, Korinn pointed to the headboard while holding her Wand of Detect Magic. We found a small button, which revealed a hidden compartment. Inside was the chest.

We opened it, and it was empty.

Over two weeks later and we’re finally back to our weekly D&D adventures! This week was a Sunday make-up session. We’ll resume our regular schedule this Friday.

We picked back up in our careful exploration of the Cloud Giant Castle of Lyn Armaal.  We’ve managed a stealthy infiltration thus far, heading to the tallest spire as per the Oracle’s cryptic instructions.

We ascended to the second floor of the tower, but stopped when we heard some ominous sounds. It sounded like like some kind of air elemental guarded the next room. I conjured up a Cloud Giant image using my Misty Visions invocation, and set it to enter the second floor landing, along with some Minor Illusion sound effects.

The illusion was greeted by some kid of sentient wind, but it spoke in a language we couldn’t understand. There were two of them, and when I had the giant continue into the room, they attempted to attack it. Then they quickly turned their attention toward us. 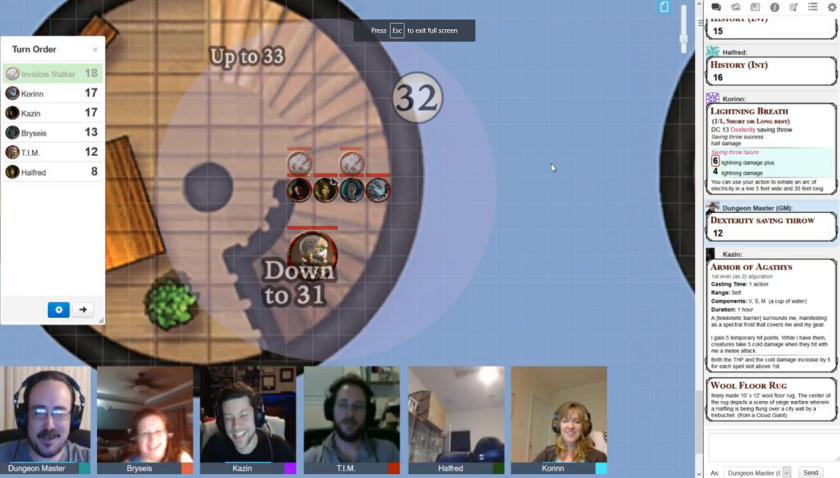 This fight was a pain in the ass. It was a pair of Invisible Stalkers that stymied us the whole time, forcing our Sorcerers to unleash multiple high level AOE attacks (including Cloudkill and Fireball) while our melee attackers had to guess at their positioning.

At one point Bryseis did have the good idea to break open an old hourglass and throw out the ashes onto one of them. This allowed us to see the whirling creature, but only for a single round.

Despite the annoying difficulty in hitting them, they didn’t actually do much damage to a full rested 10th level party.

We finally destroyed them and proceeded to loot the room. T.I.M. used Dispel Magic to unlock a cabinet, and inside was a hefty treasure haul of spell scrolls, potions, and no less than three magical items, which the DM later said he randomly rolled for: Wand of Web, Broom of Flying, and Ring of Storing.

Halfred grabbed the wand, Bryseis the web, and Korinn the ring. Juggling multiple attuned items in higher levels can be quite agonizing.

The tower continued upward into a lavisly decroated bedroom, including a gem-encrusted bed with an animated mobile made out of real stuffed pegasus, magically enchanted to fly in a circle. This was definitely the Queen’s bed chambers. No doubt the magic conch shell we sought was here.

Unfortunately our collective Investigation skills suck (only the Wizard has any mechanical need for a high INT skill), and we spent an embarrassing amount of time failing to find it within this tiny room. Korinn activated her Wand of Detect Magic and the headboard lit up. From there we found a secret chest, but the conch shell was missing.

Turns out the chest itself is magical, shunting the shell into the ethereal plane. Only the person who sent it, most likely the Queen of the Cloud Giants herself, can retrieve it.

Well, crap, so much for the old sneak and grab.

I came up with a plan: since this was clearly the Queen’s bedroom, and we still had the element of surprise, surely the best course of action was to stake out this area and surprise her when she retires for the evening?

Our planning was interrupted by a screaming dragon. We were reminded that we had a secondary goal here, to rescue our old dragon friend Felgolas. But we had no idea where he was.

So, naturally, we decided to split the party.

Korinn twinned cast Invisibility on Halfred and Bryseis, our two flying characters (Bryseis with her new broom). Their job was to perform a stealthy reconnaissance of the castle, and hopefully find out where Felgolas is. If they can simply free him on their own, that’s even better, or perhaps give us a heads up when the Queen returns.

The rest of us would clean up this area and prepare the ambush.

It wasn’t the most thorough session. We went all of two rooms and had a single fight, but I’m very much looking forward to the ambush and scouting we have planned next week!