Investigate mysterious shipwrecks that lead to a crooked mining operation in this mini-adventure for 9th level. 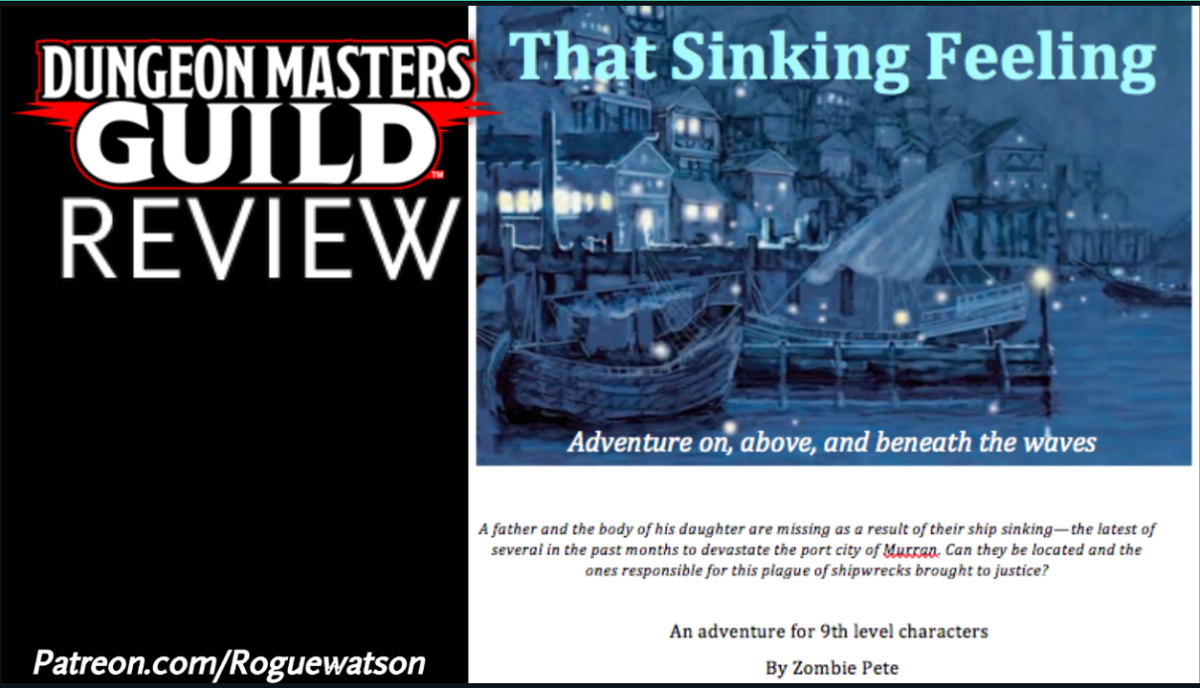 A review copy of “That Sinking Feeling” was provided by the publisher. Find more DMs Guild Reviews on my website and YouTube channel.

“That Sinking Feeling” stands out as one of the higher level adventures I’ve reviewed. Designed for a party of 9th level characters, it’s set in the port city of Murran, where the party offers to investigate a recent spat of mysterious shipwrecks. It’s a solid mini-adventure with multiple dungeons, though the plain layout (and grid maps) and minimal presentation are a major step backward.

I recently reviewed an adventure that included exceptional organization, structure, and layout. Unfortunately, “That Sinking Feeling” is on the opposite end of the spectrum.

The pages are plain white, the art is tiny and minimal (even lacking a full page cover image), the grid maps are tiny and bare-bones (with no separate player maps), and there’s no table of contents, adventure overview, or adventure hooks to help get DMs started on what this product is all about.

It’s a shame as the adventure itself isn’t bad at all, though its inciting incident is a big awkward. The port town of Murann has been experiencing a high number of shipwrecks just a few miles out of town. The party can either begin talking to the locals to get more information, or witness a shipwreck happen directly in the bay and watch as the locals rescue survivors.

Pro-tip: don’t design any encounter that your players are meant to just stand there and watch! It would have been far more effective to create a fun scene of the PCs rescuing people, and perhaps investigating how it happened, or even put them on the ship at the time of the wreck, creating a personal stake in the entire adventure.

The PCs are hired by a local noble to investigate the shipwreck and recover her lost husband and daughter, with the catch that her daughter is currently deceased and was being transported to be raised.

Investigating the shipwreck leads to a coral reef dungeon run by Sea Hags and filled with Merrow (by 9th level the PCs should have access to some form of water breathing), as well as a few captives of the ship.

The shipwrecks are caused by a pair of gnome brothers who create and enchant automatons, ship them out on ships (the English language sucks sometimes), and have them bore their way, sinking it, where they can then salvage the wreckage.

It’s a clever plan, and the PCs can catch one of the brothers on a salvage run, and chase him back to the mine (or get clues from the ship and townsfolk). The mine features plenty of these nifty automatons, including the BioShock-like Borers, and a wounded black dragon that PCs can either negotiate with, kill, or ignore.

A gold coffin is found in the mine but no sign of the daughter’s body. For that they’ll have to stop by the final leg of the adventure, the gnomes’ mansion. It’s technically the 3rd dungeon though it mostly comes down to the final boss encounter with a pair of high level spellcasters (or one of they defeated one of the brothers earlier).

I enjoyed seeing three very different dungeon designs in such a relatively small, straightforward adventure, and the tactical notes on running the high level spellcasters is vastly appreciated. For a relatively higher level adventure it feels a bit mundane and underwhelming, however. The threats and scope I’m seeing here seem more suited to a 5th or 6th level party. But most egregious are the bare-bones dungeon grid maps. Cool dungeons deserve cool maps, and the presentation or lack thereof brings the whole product down.

A review copy of “That Sinking Feeling” was provided by the publisher. Find more DMs Guild Reviews on my website and YouTube channel.