A review copy of “Malar: The Beastlord Compendium” was provided by the publisher. Find more DMs Guild Reviews on my website and YouTube channel.

In the Forgotten Realms pantheon, Malar is the bestial lord of the hunt, and most commonly associated with were-creatures and evil-aligned druids and barbarians. You can find everything you’d ever want to know about Malar’s history, rituals, followers, as well as a selection of new Malar-themed player options, in Malar: The Beastlord Compendium.

The Beastlord Compendium features over 100 pages, about half of which act as a comprehensive sourcebook, detailing history and lore surrounding the titular god, organized into six chapters. The book is exceptionally well designed, with half-page, full-page, and art inserts throughout, including regional maps, creature sketches, and bloody pull-quotes. The book even includes a full index, illustration credits, and a damn bibliography for further reading.

Everything from cult hierarchy to common expressions and taboos can be found in the first two chapters. Malar is a relatively straightforward god of hunting and predation, and all the information here lines up with that philosophy.

Malar’s followers care not for the laws of man, only of the jungle. They see civilization as an encroachment on wilderness. The strong survive; kills must be made up close and personal; and wanton destruction is frowned upon compared to the ritualistic hunt. The book takes a deep dive into the Cult of Malar, including chants, songs, and poems, which could provide some excellent background tools for any villainous NPC faction.

The third chapter is meant to cover the machinations of Malar throughout the Forgotten Realms by serving up chunks of cities and regions, but it plays out more like a somewhat boring history book. Lots of proper names and historical battles and events, but not much that excites me or makes me interested in using those locations, though I was impressed with the author’s intimate knowledge of Forgotten Realms lore (or so I assume). 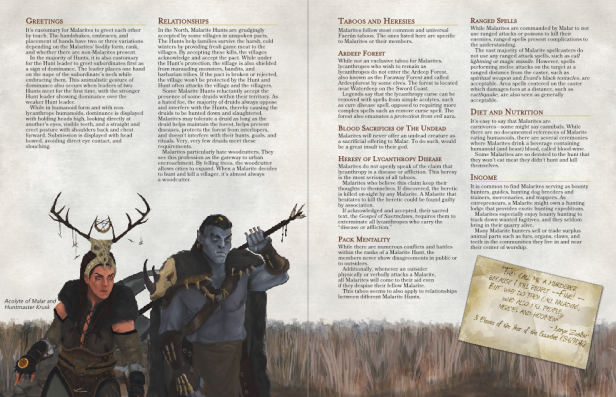 Chapter 4 also leans too hard into a history lesson, providing notes on famous and infamous Malar leaders, agents, and the adjacent warring gods. Again, this information could be useful as a backdrop, but I was hoping to get more actionable information, such as sample NPCs I could drop into a campaign, such as a Lycan Hunter or Malar huntmaster. Give me some interesting NPCs I can work with, not so much ancient history.

The statblocks for these NPCs and more can be found in the appendices, which take up literally half the book. If you have the much information in your appendices, why not simply add them as additional chapters? All the new player and DM options can be found here, including two new subclasses, a dozen feats, and over a dozen spells, magic items, and creature statblocks.

The new subclasses, a bestial cleric and druid, are a bit too mundane and safe, but the new feats, spells, and magic items are excellent. With the feats you could better embrace your lycanthropy (or be a lycan wannabe) with Pack Hunter, Blood Rage, and Howl of the Blood Moon, or be on the other end of the silver crossbow bolt by taking Lycan Hunter and Lycan Tracker.

Spells follow the beast hunting theme with Detect Lycanthrope, Pseudolycanthopy, Savage Wound, Blood Lust, and Call of the Pack. I particularly liked Spectral Peryton summoning a ghostly peryton that flies forward, grapples enemies, and carries them 20 feet in the air and 10 feet backwards to drop them – lots of fun applications for that one.

Shockingly the magic items also feature a very prominent theme, including bracers that resist lycanthropy, hunting horns, wolf-summoning spears, and a claw amulet that can graft itself onto your arm. I was impressed with both the quality and quantity of items that can be squeezed out of this central theme.

With lycanthropy being such a prevalent aspect of Malar and his worshipers, I was disappointed that we don’t get any new rules or expanded mechanics for player character lycanthropes, as I find the section in the Player’s Handbook extremely underdeveloped and imbalanced. Instead we’re left with half a dozen slight reskins of existing were-creatures, such as the wereape, werefox, and werewolverine. In a book about Malar, lycanthropy really needed to be an entire chapter.

The Verdict: If you’re looking for detailed history and lore about the beastlord, as well as themed spells, items, and feats, Malar: The Beastlord Compendium has you covered.

A review copy of “Malar: The Beastlord Compendium” was provided by the publisher. Find more DMs Guild Reviews on my website and YouTube channel.