We interrupt our regular programming of “Storm King’s Thunder” with this special broadcast! Due to some of our usual players being out of town for the week, we decided to gather together for a one-off side-venture starring new (pre-generated) characters and a pre-built adventure.

Welcome to the “Den of the Rotten Kings!”

I can now add “threw together a 4 hour D&D adventure in a day” to my list of DM accomplishments. The only way I had a chance of doing this was by using a pre-built adventure.

I already had a number of good sources. I thumbed through my Book of Lairs from Kobold Press, a fun collection of over 20 monster lairs and dungeons, many of which can serve as good one-shot dungeon crawls. As a Kickstarter backer I also got a .pdf of all the battle maps, which I could convert into Roll20 pretty quickly.

I settled on the 3rd level dungeon, “Den of the Rotten Kings.” It felt like the easiest to run, with simple foes like bandits, thugs, and wererats, and some classic traps with tripwires. It also had a few fun role-playing and dialogue opportunities with two different potential allies who can be rescued.

It’s impossible to say how long a mini-adventure will last, and we ended up starting very late since we were still scrambling to get our character sheets done by our usual start time. It took us a solid four hours to defeat the leader of the Rotten Kings, but I think it was a fantastic adventure that did a great job telling a complete mini-story.

The story hook is simple – a city is under the sway of a dangerous new narcotic by a criminal organization called the Rotten Kings. The Kings make their lair down in the tunnels and cisterns beneath the city, but have threatened to dump barrels of the drug into the water supply if they’re attacked. The heroes are hired as a small force to infiltrate the lair and root them out.

My players chose from a list of official 5e pre-gen character sheets at level 3. They settled on Filkur, the gnome druid, Falafel, the half-elf bard, Scarlet O’Fair the human paladin, and Morgana, the tiefling warlock.

Flikur kicked things off by Wild Shaping into a Giant Centipede to climb down the giant well into the Kings’ lair. The rest used a rope to climb down. Morgana failed the Athletics check, but Scarlet was able to succeed hers earlier, and caught her before any damage was done.

The dungeon is designed with a spiffy tunnel network on the west side. Only small creatures can fit through some parts of it – perfect for a Centipede! Filkur went North and spotted the mushroom cave and captured alchemist, while the others headed right to note the large cistern with raft and rope to get across. 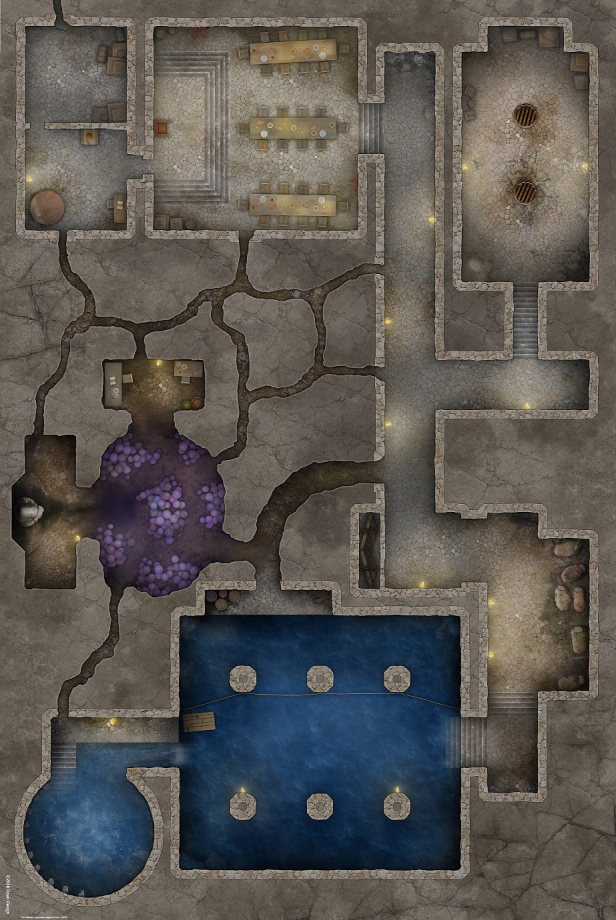 A sentry stood guard on an alcove overlooking the area next to some barrels. While they decided how best to get rid of the barrels and the guard without sounding an alarm, the Filkur-centipede sneaked up behind the bandit and stealth attacked him. The centipede’s poison actually killed the bandit in a single hit, dropping his body into the water below.

I teased the bone crabs in the water by having the body get dragged under and blood bubbling up. The party warily took the raft across the water while the centipede stuck to the walls. The bone crabs surfaced when they were about halfway across.

Instead of engaging the crabs everyone used their actions to pull the raft further along the rope and across the water. The bone crabs are actually incredibly slow (10 ft swim speed) so I had little hope of catching them. The party reached the stairs on the other side and hopped off, and I had the crabs give up the chase.

The party found little loot among the dirty bedrolls and boxes, save for an old, valuable dagger. Filkur stumbled over a tripwire, unleashing a hidden crossbow trap. I rolled all of 1 damage on its 1d10 attack, so even though most of the party failed the DEX save, it really didn’t matter.

A larger tunnel opening back into the warrens lay up ahead, and Filkur lead them through, pointing out the mushroom cave, old statue and altar, and alchemist lab with a chained up old man.

I had everyone roll a DC 10 Acrobatics check every time they moved through the toxic Mushrooms, which ended up doing a solid bit of damage to everyone several times.

Gessel was the captured apothecary and once the party calmed him down he provided some information on the drug’s manufacturing process. The Kings had excavated the mysterious statue with some black ooze seeping out of it, and it mixed with the nearby mushroom cave to turn them toxic. Properly distilled they could give off a vapor that caused the pleasant hallucinations, but it was still dangerous.

Gessel had been captured and forced to make the drug. I had fun role-playing him as a bit of a crazy old man who got high on his own supply.

He had made a batch of Greater Healing Potions, but claimed that two of them were actually Potions of Poison that he had planned to use on the Kings. Trouble is, he couldn’t quite remember which ones were which. Without proper identification magic, few of my players wanted to take the risk, and none would end up drinking even one of them.

The party deliberated on how best to rescue him and destroy the drug, and ultimately decided to wait on both until they could defeat the Kings.

The Altar room contained a mysterious statue that held a skull and a dagger, wrapped in a cloak. Filkur made a reach for the dagger and the cloak came to life. The Empty Cloak isn’t a particularly strong foe but lasted a surprisingly long time and got some solid hits in with its shadow slam attack.

With the Empty Cloak defeated Filkur claimed his prize, a magical Dagger of Venom (he’d have to wait to identify it later during their short rest).

Gessel had told them the whereabouts of the Feasting Hall, where the majority of the Kings and their leader stayed, and the torture chamber with the rat cages. The party went back out to the hallway while Filkur explored the tunnels some more using his smaller gnome body. He spotted the Feasting Hall but stayed clear and came back out further along the hallway.

He tripped the flaming oil trap, which was bad for him but ultimately good for the party, as nobody else was within 15 feet of the explosion. It did make a sound that caused one of the bandits in the last area to come out and check, and the party ran to the side hallway in the right, seeing three thugs torturing a former member of the kings in a cage in the floor.

None of the thugs noticed the party so I let my players form a tactical plan. Filkur cast Entangle while Scarlet ran up the nearest thug. Falafel and Morgana both readied range attacks.

The Entangle spell got three of the thugs, but the third one ran over to Filkur and bashed him good, ending his concentration. The thugs proved tricky foes when they could use their Pack Tactics. The other two surrounded Scarlet and I rolled 20+ on several hits in a row, downing the Southern Belle paladin.

Morgana used Spare the Dying and a Potion of Healing to get her back on her feet, and they were able to turn the tide after a particularly vicious Scorching Ray attack.

After that fight they freed Kavé, a former Rotten King who had tried to skim some of the drug for himself and was caught. The party coerced him to help them with the final room, by providing a funny distraction to pull the enemy out of there. I was not expecting that and loved the idea. The party short rested to get back some strength and got into position – Filkur in the tunnels on the left, Scarlet and Morgana hiding in the hallway on the right, and Falafel down at the far end of the hallway.

Kavé walked into the Feasting Hall and told off King Sketch and ran for his life, with several bandits behind him. The party pulled off a wonderfully coordinated assault, with Filkur launching Farie Fire on all three bandits and everyone ganging up on them while Kavé ran the hell out of there.

Breaking up the final room was a great idea. Filkur stayed in the tunnels and eventually had to fight a wererat one-on-one, turning into a Giant Wolf Spider to give him a slight edge. The rest charged into the Feasting Hall, taking on bandits, wererats, and King Sketch.

The King’s special +1 crossbow proved utterly terrible with my awful roles, which I actually delighted in role-playing his frustration (“Stupid elves can’t make anything work!”). He flung the crossbow to the ground and began his egress to his backroom. The party gradually made their way through the Feasting Hall, finally meeting up with Filkur and helping down the last wererat.

They dashed to the backroom just as Sketch was emptying out his treasure hoards. The King had one final desperate assault, launching a flurry of sword attacks and downing Falafel. But the end was night and their combined might put an end to his reign.

Whew! Normally we don’t last for four hours and everyone was exhausted after this. It definitely ran long and it didn’t help that we got started a bit late. Still I think it was a successful adventure and a great way for us to do a one-off side journey with completely new characters. As with the ones we made for “The Shadow of the Wild,” I have no idea if we’ll see these characters again but I’m glad we’re able to do D&D nearly every week even if we can’t continue our main campaign.