We infiltrate the underground Zhentarim outpost using some subtle and not-so-subtle tactics.

I headed toward the flickering torchlight down the tunnel, motioning for the others to stay back. I rounded the corner and the cave opened up into the entrance to an old temple – just as the Zhent thug had described.

A pair of guards near the entrance were playing cards. I stumbled onto some loose rocks and the nearest one glanced up. I felt a rush of adrenaline before I remembered I was still disguised as the man we had interrogated outside the cave.

“Walter!” he called out. “What are you doing? I thought you were going into town with the others?”

I had to act fast. “Ah yeah,” I stammered, gradually calming myself. “I forgot something. Hey, those brutes – the guards, are acting really weird.”

“The orogs?” He replied. “What are they doing?”

“I don’t know but they’re starting to get violent. Get out here and help me with them!”

We went back and forth a few times. I briefly entertained trying to pry some more information out of him (Zellan was indeed here, somewhere) but didn’t want to press my luck.

Finally the guard relented. He and his buddy got up to investigate. I mentally called out to my friends that they were coming down the tunnel. I made sure to avoid making physical contact as they brushed past me.

The fighting erupted almost instantly. Bryseis conjured up several magic missiles, slamming into one guard, and Halfred unleashed a hail of arrows. The Zhent fell, and the other turned to run, shouting about the alarm. T.I.M. smashed him with the mace as he ran away, directly towards me.

I reached out with my mind, but the man’s eyes were wide with fear. The same man I’d just spoken with seconds ago. He was in full flight mode and barreled into me, even after I manifested my psychokinetic glaive and slashed at his legs. I held my ground, bracing against the cave and shoved him backwards.

He gave a sudden scream, and for a moment I questioned how hard I hit him. Then I heard a sick sizzling sound as his face began to melt. The melting flesh cascaded down his body, choking him before he could even scream.

As he dissolved into a messy puddle I glanced back to see Korinn retract her arm and nod solemnly at me. I took a moment to realize that a few weeks ago I would’ve been horrified at this brutal display. Now it was just business as usual.

We finally get to crawl a dungeon this week, huzzah!

We had spent a good chunk of last week preparing for the Zhentarim Outpost dungeon crawl. We gathered as much intel as we could and lured several forces outside of the dungeon, dispatching them quickly and quietly before ever stepping foot inside.

Within the caves we proceeded cautiously. Only two of us have darkvision, Kazin and Bryseis, which is a nasty handicap when you want to stealthly explore darkened tunnels.

I used Kazin’s at-will Disguise Self invocation to disguise as one of the Zhents we had defeated, which came in very handy throughout our dungeon visit.

We steered clear of the right-side of the dungeon, which we had been warned contained ‘something’ dangerous that the squatting Zhentarim avoided.

I took point and headed toward the torches on the walls, reaching the underground temple where the Zhents made their base of operations.

Outside the temple I engaged the DM with some fun role-playing dialogue,  trying to act like the Zhent I was disguised as. My plan was to lure out more guards so we could ambush them.

It worked perfectly – at least on my end. Two of the the thugs stopped their card game and followed me down the caves, where the rest of our party waited.

Unfortunately they spotted my not-so-stealthy comrades, somewhat squandering our ambush. Still, we had them surrounded and out-numbered. When one of them tried to get past me to sound the alarm, I body-blocked him while Korinn melted him from behind.

Thanks to our previous interrogation of a Zhent thug, we knew the pit traps were at the entrance to the temple and avoided them easily. We made our way inside and found branching paths to the west, north, and east.

T.I.M. grew restless and kicked in the door to the west. Once again I used Disguise Self to assuage the sleepy thug that awoke, and still managed to find out that there were three of them sleeping in the barracks. We decided it was too delicious an opportunity to pass up.

Bryseis cut their rope alarm just in case, and we stealthily made our way into their chambers.

My paltry +1 DEX was killing me this week, both with initiative rolls and on stealth checks, and I nearly screwed us all with a critical fail. Once again I used my disguise and superior social skills to talk my way out of danger.

Our party is not very stealthy, with only Bryseis making it far enough to attempt a coup-de-grace attack. She did just that, and it was spectacular!

She auto-crit with her signature Chaos Bolt against an unconscious foe, and our DM had her roll for Wild Magic Surge. She got the 5th level Magic Missile, and slammed them all into the poor sleeping bastard, annihilating the veteran instantly with nearly 60 total damage.

We charged at the other two while they were still waking up, downing them swiftly despite the uncomfortably cramped hallway limiting our movement.

From there it was either explore east or open the big double doors to the north. I anticipated our big boss fight with Zellan and the orc shaman in that room, so we all got into position and I knocked on the door.

The guard opened the room and received a face full of Korinn’s Chromatic Orb. The room opened into a dining room full of a handful of Zhents – sadly not the big bads we were expecting.

We unleashed hell but one of the thugs ran into a shadowy side room shouting something about ‘releasing the twins.’ The next round a pair of giant snakes slithered out, one grabbing Korinn and the other killing that poor Zhent who released them. 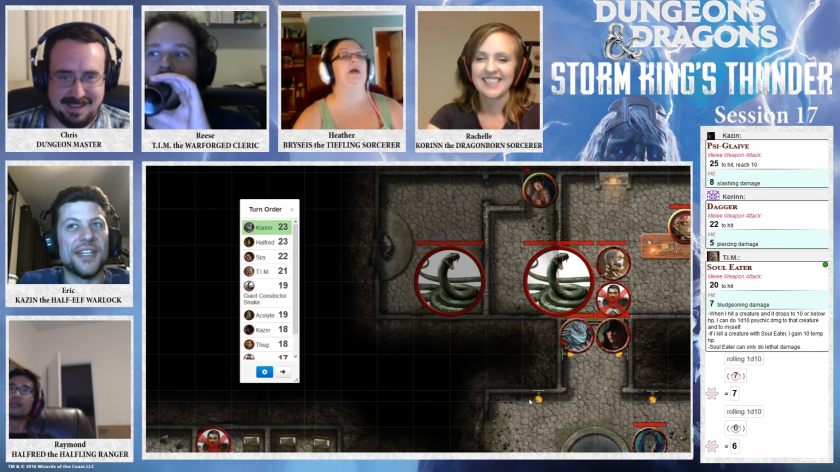 In hindsight we should’ve tried to work this room as we did with others, with subterfuge and deception. We may have prevented the snakes from even entering the fight had we approached a bit more cautiously.

I convinced the nearby Zhentarim acolyte to surrender while we focused on the snakes. The first one went down, freeing Korinn, while T.I.M. lost a wrestling match with the second before we killed it.

The room is a dead-end but we do have a live prisoner we can question. More of the dungeon awaits us, including Zellan himself. We played this one really well so far and it’s been fun having an actual dungeon crawl for the first time since that mini-cave in Session 5. We’re coming for you, Zellan.