We battle a tentacled terror, and gain an audience with the Eye of the All-Father.

The final rune above the archway glowed, and the entire archway exploded in light. The cloudy space underneath shimmered and thrummed with energy, the portal activating. Before we could blink, Bryseis stepped through it.

Harshnag turned to us, shrugged, and went after her, and we did the same.

We were deposited in a new chamber. The air and walls felt like an entirely different area. Six giant statues stood vigilant in a circle, surrounding a frozen Cloud Giant body on the floor.

Harshnag was awe struck, creeping up in reverence and sitting down next to the statues. This was a holy place for giant-kind.

We took places near Harshnag and watched as the body in the center began to stir. Harshnag spoke in measured tones: “Annam, great All-Father, we come before you, humble servants, that your eye might fall upon us, and you might answer the questions we seek.”

A ghostly giant form rose up out of it. It stared at us each in turn, its eyes radiating peaceful knowledge.

“I am Megaron, Eye of the All-Father. Step forward and pose your questions that they may be answered.”

We finally reached the oracle and got our answers, and more importantly the next stage of our main quest. But first we had to battle a crazy tentacle ooze thing.

It’s been awhile since we had a truly epic boss battle. I didn’t realize the tentacled, Oozing Vortex was a damn nightmare with Legendary Actions, armor-melting acid, and a buttload of HP. Even with our numbers advantage it was a scary fight.

My buffs saved me in this fight. I still had a bit of Armor of Agathys on, and I used my last Warlock spell slot to add Mirror Image on top, then activated my Sacred Weapon from Channel Divinity. Turn on all the things and approach the monster!

Harshnag was still ensorcelled by the Mysterious Orb. He could speak to us but couldn’t control his body, and apparently his body was trying to kill himself! I had knocked the orb out of range but Harshnag needed to repeat the CHA saving throw each round, which he repeatedly failed.

T.I.M. cast Bless and Spiritual Weapon and joined me on the front lines – after a giant acid tentacle wrapped around my body. Harshnag finally freed himself and in turn, freed me. Korinn blasted the monster with some solid Chromatic Orbs, using her last few spell slots. 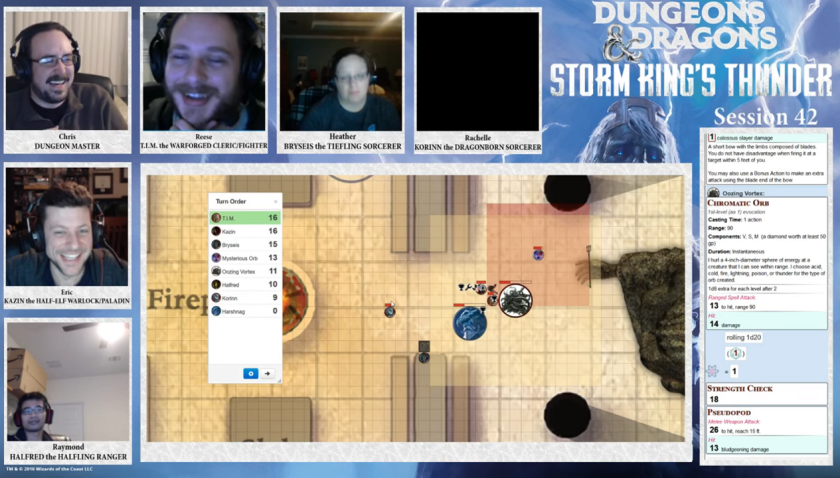 Bryseis had been out of spells for awhile, so she reached into her pockets and found Roaringhorn’s magical collapsing fortress thing. It has rules for doing damage if it expands in the same square as something. We had joked about using it as a weapon in the past.

Brysesis threw it out like a grenade, speaking the command word as it sailed through the air. The DM had her roll an attack roll using DEX, and it wasn’t great. Using a d4 he had it land about 10 feet away from where she aimed – but thankfuly the ooze was big enough that it was still struck by the 30ft tower. That’s 10d10 damage!

Bryseis would repeat this move a second time, using Mage Hand to stay away from the Oozing Vortex’s 30 ft Charming/Frightening aura that caused us to avert our gaze. It was a bit nervous as one false throw would splatter T.I.M. or Kazin. She again whiffed the DEX throw but thankfully the wide shot hit only the monster and not us. In the end it proved a risky but very effective weapon.

I was burning through my mirror images, and still took a nasty acid scar from the bastard, which permanently weakened the AC on my armor. Note to self – never do that to my players! Destroying hard-earned equipment is really shitty, particularly as I spent everything I had a few levels ago to buy my Mithril Half Plate. Harsh, bro.

With the monster defeated we claimed the trident and returned to the central chamber. Once again we had to solve a rune puzzle. I messed it up initially, causing a massive Storm of Vengeance spell to localize in the room, zapping us several times before we could escape. 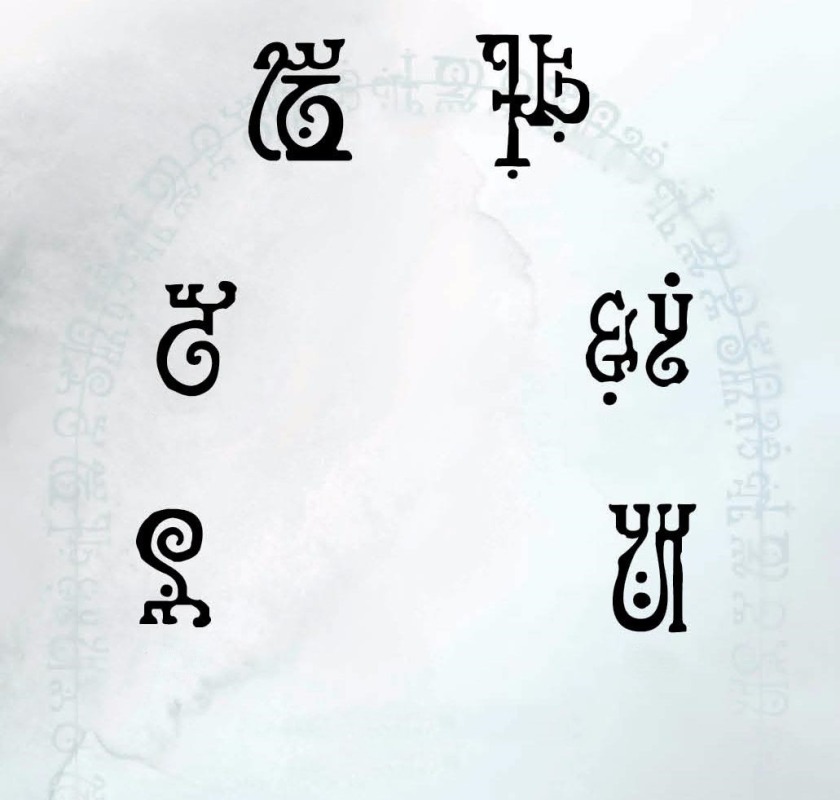 After a few minutes we returned to the quiet chamber, and Bryseis took over the puzzle-solving. There was a bit of trial and error at the end, but Harshnag is nothing if not willing to throw his life around for us, and eventually we unlocked the portal.

We walked through, finding another sacred site. There was a frozen, dead giant on the ground surrounded by statues of the other giants, each with a glowing orb. A Cloud Giant ghost rose out of the body and introduced himself as the Eye of Annam, the All-Father. The oracle! He could answer several questions using his omniscience.

We asked about the Ordning, and about our blue dragon foe. The oracle revealed that she was at a place called the Maelstrom, the seat of Storm Giants somewhere under the ocean. Was she in cahoots with them? The oracle told us that Princess Serissa, heir to the throne, daughter of the Storm King, needed our help. Only by restoring her to the throne (I guess daddy is dead?) can we repair the Giant Ordning.

Getting into the Maelstrom isn’t an easy task. The only way is to use a magical conch shell. One was bestowed to each leader of the other giants: Hill, Stone, Frost, Fire, and Cloud. Our next mission was laid out to us: Infiltrate a giant stronghold and obtain their conch shell. 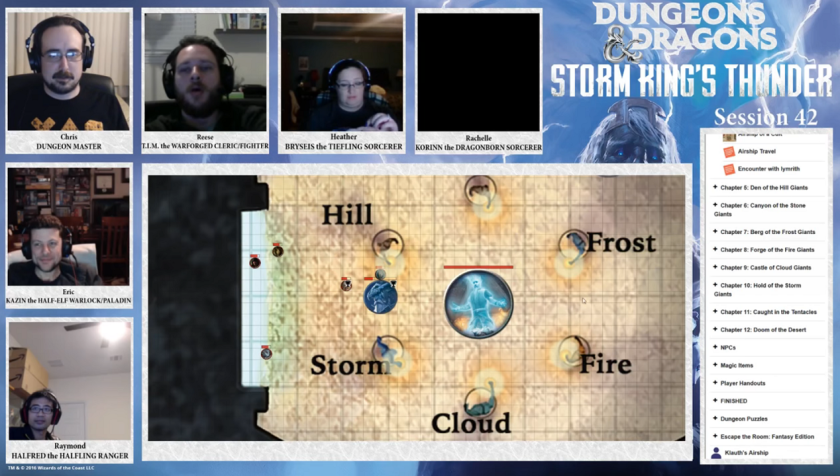 Which giant tribe do we go after? This seems like a major decision. We’ve been given choices before in this campaign, but in many of the cases it’s a choice of which area to tackle first, and end up having to do most of them anyway.

To me Frost made the most sense. We’d seen first hand the Frost Giants wrecking shit up and down the Sword Coast, and as recently as right outside this damn temple.

The oracle told us that all the giants were up to no good. The Hill Giants were razing towns to feed their gluttonous queen. Stone Giants were on a crusade to destroy the surface world. Frost Giants would stop at nothing to obtain their Ring of Winter. Fire Giants were building some sort of doomsday war machine, while the Cloud Giants had captured a dragon to find the location of a lost trove of dragon relics.

Not just any dragon – Felgolos, our bronze dragon buddy whom had previously popped up in our campaign in some really fun ways. Bryseis didn’t even hesitate, and ran right over to the Cloud Giant statue, indicating her choice. We agreed that having a personal stake in one of them was the right motivation. Cloud Giants it is!

The oracle revealed the location of the flying Cloud Giant castle, far to the Southeast. We also learned that, most likely, other giants would know the location of the Fire and Frost Giants, should we want to visit those locations afterward. The conch we’re looking for is in a chest at the highest spire.

We have our quest. All we have to do is escape this temple before the Frost Giants get us, travel hundreds of miles, infiltrate a flying castle, get to the very top, and obtain our McGuffin. How hard can it be?