Guarding the second giant relic we encounter our most dangerous foe yet, then have to choose a side between a dragon and some dragonslayers.

Note: recording was split due to technically difficulties with the live stream.

The zombie giant raised two massive fists into the air. Instead of bringing them down, electricity began gathering around him, swirling through the decaying holes throughout its body, like a macabre circulatory system.

I could feel the hair on my body stand on end. Lightning exploded outward in a massive blast. Bryseis’s summoned rat was instantly vaporized. I reeled backward as a blast of energy surged through my body. My heart raced, and I could smell burning flesh and..burning wood?

When the smoke cleared I looked over to see T.I.M., crumpled to the ground, a sickening popping sound echoing around us. I cried out and rushed over, empowering my hands with soothing life force while uncorking a small bottle at my belt and practically throwing it down his throat.

I coughed and spat blood on the ground nearby as I knelt over him. T.I.M.’s eyes slowly lit back up, and we both looked down at his shattered leg. I manifested my psi-glaive in my hands and stood up on shaky legs, infusing my weapon with psychic energy.

I turned to the gigantic monstrosity that towered over us and saw electricity begin to gather around its hands once more.

We had one final little complication before claiming our second Ostorian relic – a zombie storm giant! Like the guardian wraith giant underneath the Grandfather Tree, the ancient giants apparently left some undead guards behind to watch over their relics.

As we humbly learned, even a zombified, unarmed storm giant is still a terrifying foe.

We immediately started unleashing attacks, though the spellcasters were mostly drained after the manticore-barbarian battle. T.I.M. summoned his spectral leech (Spiritual Weapon) while Bryseis used her last available Fireball – and her last Sorcery Points to make sure it connected for the full blast. Korinn hasted T.I.M. and Kazin. We were ready.

We weren’t ready. The Storm Giant Zombie may have lacked brains or weapons, but did not lack for crazy lightning powers. It reeled back and expelled crackling electricity in an explosive blast. It only hit T.I.M. and Kazin but we’re talking 56 damage with a DC 15 DEX saving throw. 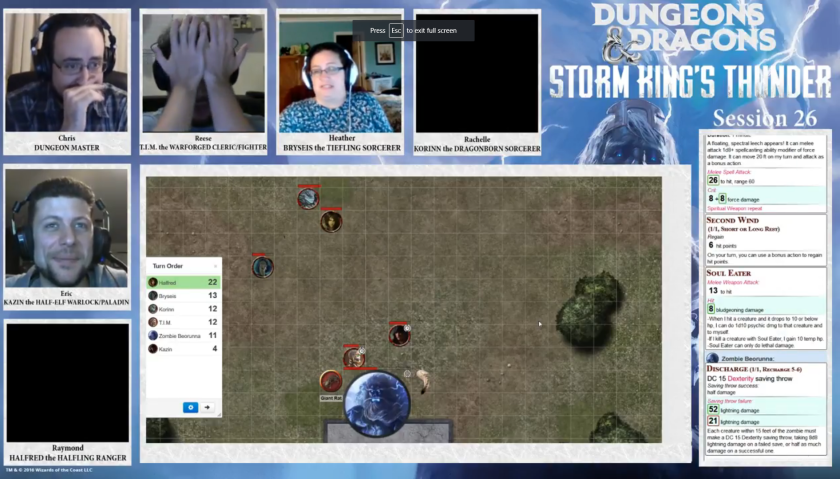 Korinn’s haste gave us advantage on the saving throw, letting me make the save. T.I.M. wasn’t so lucky, and crumpled to the ground. Oh shit.

On my turn I used both Lay on Hands and a potion of healing to revive T.I.M. Korinn and Bryseis stayed back and hurled Chromatic Orbs and Chaos Bolts. At one point Bryseis’s wild magic surge went off, casting a Fireball on herself and Korinn! Not exactly a great time for it but thankfully it only hit those two, she rolled low damage, and they both made the save.

Halfred stayed out of the way thanks to his winged boots, perforating the zombie giant again and again with arrows.

The giant couldn’t recharge its terrifying lightning blast attack that round, and we breathed a sign of relief.

It was short-lived; the zombie giant slammed down with its fists, lightning arcing off of it. The physical attack missed but apparently the lightning acts as an additional AOE saving throw that both of us had to make again.

Even with advantage we both failed (we only have +1 to DEX). T.I.M. fell AGAIN while Kazin was left with 1 hit point. This was easily the most dire situation our group has been in since half of us fell to the goblins in our second session.

That 1 hp proved invaluable. Kazin was still hasted and struck three times with multiattack and bonus action polemaster, then a Dissonant Whispers. The zombie giant was very weakened, and the Dissonant Whispers spell destroyed it.

We stablized T.I.M. and crawled our way into our Instant Fortress to pass the hell out. T.I.M. had to roll for a Lingering Injury, saddling him with another crippled leg. He actually failed the second roll as well (it’s a DC 15 CON save, not a DC 10) but I sure as hell wasn’t about to say anything. We’ve never had it come up where somebody fell twice in one fight, so maybe we can assume there’s a rule of one Lingering Injury per fight. Oye.

We grabbed the relic, a giant horn that had the power to deafen or fire a thunderous blast in a cone. It also granted lighting resistance, an example of RPGs giving you the perfect item AFTER the big fight where you’d really need it.

Having put Beorunna down, we got the hell out of Beorunna’s Well, flying our hippogriffs back to Hawk’s Nest. There was one more relic location we knew of, but it was much further to the West, near Xantharl’s Keep. We debated on the best way to get there (fly? teleport?) but our hippogriff-breeding buddy in Hawk’s Nest had some folks who wanted to meet us.

Some mercenary dragonslayers were asking for help hunting a dragon. We were weary and suspicious, and with good cause.

We learned they were paid by the Zhentarim – before we had squashed their outpost near Xantharl’s Keep. Bryseis reminded us of the note she had found that mentioned them taking care of their ‘dragon problem.’

Their dragon problem was Felgolos, the bronze dragon who had saved our asses in Nightstone from the Zhentarim. Our buddy! I like the way our DM has incorporated previous NPCs back into the adventure, such as Snikbat, Xelan, and now Felgolos.

We decided to play along. The dragonslayers offered to pay us a hefty sum just to help escort them to Everlund, which were headed to anyway. We kept our hippogriffs on the ground and set off on the road.

I had the idea to sabotage their equipment. They had heavy crossbows in the back of a wagon, along with bolts tied to bags and ropes. We had Korinn (neither she nor Halfred’s player were here this week) cast Invisibility and went to the back of the cart to break the crossbows and disentangle the weird roped bolts while we ate dinner around a campfire.

The next day Felgolos showed up, crashing into the trees. He was clearly distressed, yelling about having something stolen from him. As we rolled for initiative I reached out with Awakened Mind, reassuring him that we were old friends, and on his side. He smiled.

For once in my life I rolled a natural 20 on initiative, and unleashed a Fear spell on all four of the dragonslayers, nailing half of them. The lead warrior, Berken, shrugged it off and ran at the dragon, slicing in some nasty blows. T.I.M. ran up to help him, discovering that the dragon exuded an odd aura of malaise, which resulted in giving disadvantage to everyone around him, including himself.

Halfred launched a volley of arrows at the tiefling spellcaster, downing her thanks to massive damage. One of their guards was feared and ran like hell, while the other surrendered, and ran like hell.

With only Berken left he surrendered after we smacked him with a few more hits and spells. We grilled him about his job but he didn’t know anything we didn’t already know, except that he didn’t in fact even half the money as he had promised us. We took what little money he had and let him on his way.

Felgolos was disappointed that he couldn’t find any of his pipe weed in the wagon. Pipe weed? Must be medicinal. The funny, eccentric dragon didn’t seem well without it. He wanted to catch up with us and let us swap some stories, which will hopefully prove useful to our campaign. We’ll learn about his tale next week.