The sun was peeking over the horizon, and we were dead tired. We’d rode all night to reach Dinayla and back to Goldenfields, and I feared we were as liable to keel over as our poor horses.

Seeing the massive army gathered outside Goldenfields gave us all a jolt of adrenaline.

Five Hill Giants towered over the rest. The figure in the middle was taller still, his body covered with what looked like human-size shields welded together for armor.

Among the scattered troops of bugbears and goblins were half a dozen ogres, each with what looked like miniature catapults strapped to their backs. Walking siege weapons.

“You ever seen anything like this?” I whispered to Dinayla, despite still being several hundred feet away.

“Gods,” she breathed, awe-stricken. “I’ve never seen them this organized before.” She quickly composed herself, and her voice became confident again. “Let’s wait for them to start attacking, then move in. If we charge in now they’ll all turn and murder us.”

We held back for the moment, casting spells and discussing a plan that wouldn’t get us all killed. The army began to advance on the walls. We were in for a hell of a fight.

This week we took another detour to tackle a much older side quest, one we’ve had since we left Bryn Shander: seek out a giant slayer near Goldenfields.

With T.I.M.’s story seemingly as explored as we could get for now, we returned to Waterdeep and commissioned a coach cab to take us to nearby Goldenfields, a walled town of farms, and the food belt of the Sword Coast. It was about two days travel, and it was now or never for this nearly forgotten side quest.

As we traveled we began seeing sights of destruction. Homes and farms destroyed, and families making the trek north to the safety of Goldenfields’ walls. It was the work of Hill Giants, the one giant we hadn’t really seen in this campaign.

I hopped off and let the farmers’ kids have an easier journey. The farmers revealed that a nasty Hill Giant named The Gnasher had been raiding them, demanding tribute in food and threatening their lives and homes. Problem was, he was never satisfied.

We’d learned from the giant oracle in the Eye of the All-Father that the Hill Giant chief’s goal was to simply eat all the food, and become the biggest giant. Hill Giants weren’t terribly clever, but they could still pose a major threat to these poor folk.

The others continued in the cart and made it to Goldenfields, where they were welcomed as representatives of the Lord’s Alliance. The people had sent word to Waterdeep for help, but the message never arrived. We came clean about who we were, and the townsfolk shared different opinions of how to handle the threat, from evacuating the city to trying to give in to their demands.

One woman, Naxene, had another option: locate an old giant-slayer who lived up in the nearby Forlorn Hills. That was the woman we were tasked with finding anyway, so we agreed to it.

The problem was we were on a strict time-table. Gnasher was due to show up with an army at the gates the next morning, demanding all of their food.

We were given horses to ride all night to Dinayla’s. The Forlorn Hills are apparently crawling with monsters. But even with Halfred sensing them all around we couldn’t afford to detour. We ran straight into a pair of Bulette’s, who nearly knocked us off our horses. We were forced to fight them, and T.I.M. discovered they were capable of a nasty leap attack. 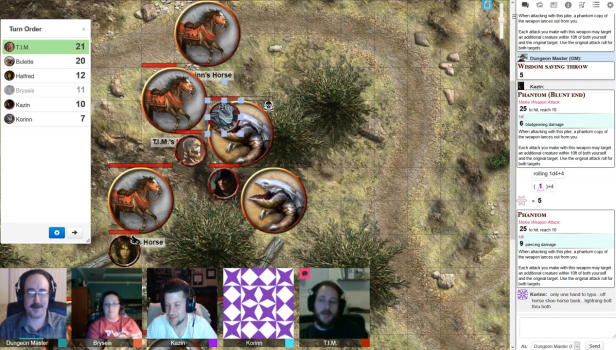 Too bad for the Bulette’s we were fully rested. Both our sorcerers unleashed powerful spells, Bryseis using her Crystal Wand and Bend Luck abilities to maximize her fire damage, resulting in a Wild Magic Surge that turned her into a sheep! Despite the Bulette’s frightening damage potential we outnumbered them, and put them to rest within two rounds.

Halfred warned us that more were on the way, so he shot an arrow into Bryseis-sheep, effectively snapping her out of it, and we jumped on our horses and sped away.

Dinayla’s cottage was easy to find, but convincing her to help was another matter. She was surly and jaded, a loner who wanted nothing to do with the nearby townsfolk. It was Korinn that actually convinced her to join us, by trading away the books she’d been hauling around from the Cloud Giant library.

We didn’t have time to stop and chat, we had to immediately race back in the dead of night. We all had to roll a CON save for Exhaustion (well, except T.I.M. as a warforged), which I believe is the first time we’ve ever actually been affected by Exhaustion in the history of our time with D&D 5E.

When we reached Goldenfields our hearts sank. Gnasher was there along with four other hill giants, a half dozen ogres, and even more goblins and bugbears. A giant siege army had assembled just outside the walls of Goldenfields.

We could see the militia ready to defend on the walls. We approached from the other side and began buffing each other with spells and abilities. We were in for a hell of a fight.