I was still patting out the flames triggered by the statue trap that the damn tiefling woman had set off when I heard a shriek. I turned and saw the second Cloud Giant raise its gigantic mace and bring it down near the statue, right where Korinn hid.

A blue blur darted out from behind the statue as the mace connected. Her forcefield sprang up instinctively, the mace crashing through it like wet paper, and she-

Wait, something happened. The entire world seemed to slow down for a moment, right before the mace would have crushed her skull. I felt a weird tingling sensation, like deja vu. On a hunch I glanced in the other direction, seeing Bryseis peeking out from behind the statue. Her eyes were glowing, mouth moving, and hands twirling in some arcane ritual.

I looked back and saw, impossibly, the mace bouncing off the forcefield, glancing harmlessly to the side as Korinn finished her egress. When she turned around her arms were already outstretched and electricity crackled around her, sending a deadly bolt of lightning surging into – no, through, the first Cloud Giant, splattering blood and organs into the ceiling behind him. The Giant let out a pitiful sigh before slumping to the ground, while the second called out in a wail.

I looked back at Bryseis, who simply smirked.

Escaping the ancient Cloud Giant library at Raven Rock proved far more difficult than we anticipated, and also far more exciting as an airship full of dragon cultists swooped in to carry us to the safety of an ancient red dragon. Er, we hope.

After defeating the sentient spellbook from last session, Halfred warned us that his Alarm spell, which he’d set at the entrance to the library, had been tripped.

We knew coming in here that the ravens had flown off, presumably to warn the resident barbarians of the area. What we didn’t know was that a team of Cloud Giants met them out there, killed them all, and were preparing to do the same to us.

Expecting a horde of barbarians, we devised a plan around the trapped statues at the entrance. Korinn cast Invisibility on her and Bryseis, and both stepped behind either side of the giant statues. We’d draw our enemies inside, and as soon as they cross the halfway point, our sorcerers would unleash hell, which would then trigger the traps on anyone caught in the middle (while keeping our spell-slinging ladies out of harm).

It was a bit risky putting our backline out in front, but again, we were expecting barbarians. Not freakin’ Cloud Giants.

Halfred entertained all of us as he performed a one-halfling performance, emulating the talking books of the library, attempting to draw any curious folks down to us. When a booming voice replied in Giant, we quickly realized our mistake.

Yet they completely fell for his ruse. Halfred convinced them that we had all perished down here, and it was a simple manner of collecting our bodies. Only two of the Giants descended down into the library, with the third seemingly retreating to a nearby keep.

Well hell, we were already in position, why not just go with it? The giants entered our killzone and the sorcerers cast their spells; Korinn twinning Witch Bolt and Bryseis attempting to blind one of them. The traps nailed them for addtional damage, sending one of them reeling backwards.

In hindsight we definitely should have fired off stronger AOE spells, as the one weakness we could exploit was their horrible DEX saves. Their CON and WIS saves were insane, unfortunately, causing our Confusion and Blindness spells to fail, and preventing me from using pretty much any of my offensive spells.

Halfred fired off arrows from down the hallway while T.I.M. summoned his spectral leech and I used my Channel Divinity to empower my psi-glaive, both of us running up to engage them in melee range.

I though Cloud Giants were mostly spellcasters. While they do possess some high level spells they were more interested in smashing us into tiny pieces. At one point Bryseis would actually trigger the traps again, with me inside with the Giants. Hey, same teams!

T.I.M.’s high AC proved helpful, but none of us could do much when they rolled 30+ on attack. T.I.M. parried some blows and held fast, but it was Korinn who would take the brunt of the onslaught, bringing her down near death.

In the most epic moment of the battle, Korinn attempted a hasty retreat, triggering an opportunity attack. The Cloud Giant rolled a 26. Korinn was in half cover (+2 AC), bringing her impressive sorcerer AC to 19. She used a Shield spell to bump it up to 24.

It all came down to Bryseis, who used Bend Luck to reduce the Cloud Giant’s attack Roll. She rolls a d4 and would need to roll a 3 or 4 to make him miss. With the 20+ damage, it was literally life or death for Korinn.

She rolled a 3! Korinn dodges the attack! Her forcefield deflected the blow while a nearby Bryseis smirks. Korinn ran over to T.I.M. and in one swift motion threw out her hands and fired a Lightning Bolt directly through the chest of the other Giant, killing him.

Wow! Crazy moments like that make D&D combat truly memorable. This was easily one of my favorite moments from our campaign.

The second giant was wounded, and seeing his buddy go down decided retreat might the be the better option. He cast Gaseous Form and, uh, very slowly attempted to escape.

This was a funny case of perhaps the DM not quite understanding the full ramifications of a spell. Pretty sure Gaseous Form isn’t really intended to be used as an escape spell in combat. It does grant resistance to nonmagical damage, but the cloud can’t attack, and has a speed of only 10 feet. So we proceeded to attack the crap out of this poor cloud. Ha!

At some point the Giant canceled the spell and cast Fly instead, but we continued hammering him for tons of damage.

On my turn I attempted to get him to surrender and succeeded with a 23 Persuasion check. The Giant listened intently as I told him were trying to save the giants and fix the Ordning – and whoever gave them the orders to capture T.I.M. and Korinn was an evil ancient blue dragon and certainly no friend to Giants.

Another 20+ Persuasion roll and I had completely talked this Giant down. He agreed to tell his buddies about our quest, and prepared to fully back off from hostilities.

Halfred rolled Insight to try and gauge how sincere he was, but rolled an 8. It was a good move, so I followed suit, rolling a 17. The DM informed us that the Giant was straight up lying to us. What!? We were completely floored.

It was still my turn on the initiative tracker, so I relayed the information to my teammates via Awakened Mind (at least nearby T.I.M. and Halfred, the others probably thought I’d gone crazy), walked past the Giant, then reactivated my glaive and brutally cut him down. Sometimes fancy speeches don’t count as much as a glaive to the chest.

During the entire fight we’d heard a booming voice outside warning us of an approaching army of Giants. It was meant to get us to escape – the DM was surprised we were able to actually defeat the two CR 9 Giants. 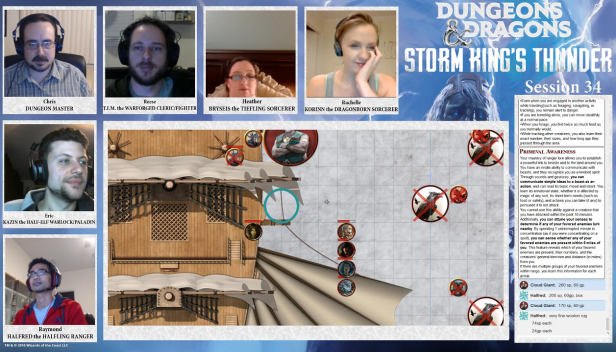 We walked outside of the library into a warzone. The Giants had already killed the barbarians and their Giant Raven mounts. That third Giant from earlier was attacking a big airship, where several men in masks defended it. The leader waved us over, and pointed to the North. T.I.M.’s high perception informed us that an army of Cloud Giants was approaching in a flying castle. Time to leave!

We were thankful but cautious, as always. The leader informed us that they worked for Klauth, a red dragon. Not just any dragon but apparently the oldest and most powerful dragon on the Sword Coast, and he demanded an audience with us. Vastly weakened and drained of spells we were in little shape to argue, so we let them carry us west toward the Klauthen Vale, getting only a Short Rest in the process.

We were escorted into a cave lined with dragon cultists carrying candles. The captain who had rescued us warned us basically not to fuck with Klauth, and that he was apparently both thin-skinned and incredibly powerful, a terrifying combination.

Our session ended just as we entered the middle of the cave and the ancient red dragon approached. Red dragons are not good creatures to consort with, but in this case the enemy of our enemy may just but an unlikely but powerful friend.