The one-shot crew searches for missing villagers in an abandoned temple in this special Friday the 13th session.

We interrupt your regularly scheduled programming for a one-shot adventure, starring our semi-regular one-shot crew, last seen exploring the haunted mansion of Brightblossom.

This time Chris and I swap seats in the DM’s chair, as the party investigates missing townsfolk and a village with a murderous past.

The party was hired in the town of Emerald Cove to rescue some missing villagers. Falafel the quippy bard and Scarlet the friendly paladin were now joined by a kenku named Corven, an urchin who grew up on the streets of Luskan and was obsessed with death, honing his body and mind and wielding a pair of bone-chuks.

My first time playing a character since our Storm King’s Thunder campaign ended (though I did play an NPC during a previous guest DM session).

The village’s teens and children were getting killed – murdered and hacked to pieces. Parents and other villagers took it upon themselves to investigate the abandoned temple outside of town to look for answers.

But they never returned.

Our job was to stop whoever was doing this, and to hopefully bring back the missing villagers alive. As we headed out of town, we learned from a stumbling drunk that the village had a dark past. The local priestess had a mentally challenged boy, and the boy was bullied to the point of death by the other children. She had vowed revenge, and now it appears she was enacting it.

A five hour journey into the woods led to the old temple. Corven attempted to pick the lock, but sprang a nasty poison needle trap. At the same time a hulking corpse-like figure emerged from behind us, wielding a hockey mask and machete. Happy Friday the 13th everyone! 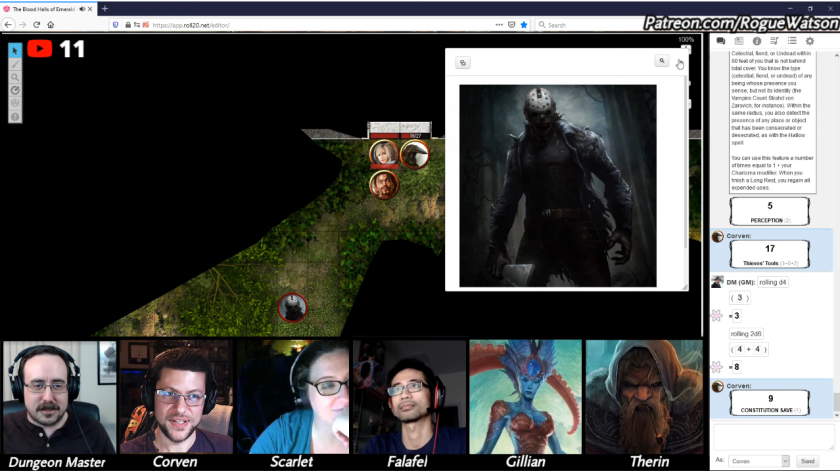 The creature was without emotion or thought, yet hell-bent on killing us. The three of us were able to put it down before it could do much damage. The body yielded more confusion, as it wasn’t a corpse, nor a Frankenstein-like flesh golem. Was this the woman’s boy brought back to life?

We entered the temple  and noticed a large pile of bones in the first room. Corven was immediately interested, but stopped short when they all saw the bone pile moving. It took a few moments to realize it wasn’t the bones but something stirring underneath. Whatever was under there was asleep.

Yet we could see some treasures in there as well. Carefully Corven crept toward the pile (Stealth) and reached into the bones to pick up a gem (Sleight of Hand). Success on both counts! But then we saw more tantalizing loot: a magical suit of armor, and some fancy slippers.

Corven utilized Guidance and Falafel’s Bardic Inspiration, but ultimately just rolled incredibly well on multiple Sleight of Hand checks to snag all the treasure without waking the beast. Huzzah! Scarlet donned a fancy set of Adamantine Armor, Falafel pocketed a blue gem, and Corven now has some Boots of Spider Climbing.

We carefully went around the bone pile and saw three doors, with the central door sporting a recessed upside-down ankh symbol with no way of opening. As the only one with darkvision (and not wanting to make light with the sleeping beast nearby), Fafafel led us into the right-hand door, where he saw an imp-like creature brandishing knives and taunting a pair of captured townsfolk in a jail cell.

Falafel used Minor Illusion to lead the imp down the opposite hall as we crept into the room. Scarlet lit her lantern and we spoke to the captured women. They warned that the killer corpse-thing we met outside wasn’t dead – they’d killed it several times before and it always returned. Uh-oh.

Corven tried picking the lock but it proved difficult, as the dagger-wielding imp returned. It sprang at us and danced away, with Corven chasing after it. At the same time, the masked monster we thought we had killed approached from the door we came in, grabbing throats and attacking with its machete!

This time the fight proved a bit more difficult in tight quarters, including a nasty crit from the machete. After trading a few blows the two beasts went down, with Scarlet decapitating the hulking corpse. We freed the prisoners out of their little jail cell, short rested, and shoved the reanimating body inside. We held onto the head just in case.

Further down the eastern hallway were a row of urns. Falafel investigated them, finding them all filled with blood. One urn held something at the bottom however. As Falafel debated on how to get it, Scarlet stabbed the urn with her sword to leak the blood out. But the caustic material sprayed them both, causing some nasty necrotic damage.

It turned out to be worth the literal blood-bath, however, as the item in the bottom was the ankh needed to open the central chamber. We returned to the bone-pile room, fit the ankh in, and the doors opened.

The room beyond held a circular chamber with multiple metal cylinders arranged in a clock formation. Each cylinder was suspended off the ground, with blood draining from the bottom into a central drain. A pair of animated scarecrows methodically walked around, poking and prodding into the cages with long poles. From some of them we could hear soft moaning.

Corven wanted to jump the scarecrows now, as they didn’t seem to notice our presence, but Falafel went to open the nearest cage. A bloodied man collapsed from the spiky iron maiden, bleeding out on the floor. At that point the scarecrows turned hostile and ran at us.

The first went down swiftly to a flurry of blows, but the second proved much more difficult. A hilarious battle of wills played out between it and Falafel, bouncing back and forth between Vicious Mockery, and the scarecrow’s fear abilities, before we finally took it down.

Every one of the cages held one of the missing villagers, though some were already dead. Scarlet used Lay on Hands to stabilize all of them. We briefly debated on leaving the cursed area with the villagers to get a partial payout. But the threat was still very much alive.

Falafel took out his lute, placed the decapitated mask-head on the floor, and taunted the priestess. Sure enough the doors on the opposite end swung open, revealing a large chamber with a pit of bones, four vats of blood, a hanging corpse with tubes running out, and the old priestess. Roll for initiative!

As we hunkered in the iron maiden room, the priestess fired off radiant bolts, and called out for her son to help her. The hanging corpse didn’t respond, but one of the blood vats began to bubble, and an exact copy of the thing we had already killed twice emerged, mask and machete at the ready.

Scarlet was the first into the main room, using her strength to break free of the grasping skeletal hands in the entryway. Falafel laid down a Silence spell, causing the priestess to flee out of its range and back to the splayed corpse, perhaps her original son’s body.

Corven used the spider climbing slippers to walk on the walls around the pit while Falafel jumped over them using his Boots of Striding and Springing (magic feet for the win!). But by then more of the machete doppelgangers had spawned, and the party was split trying to deal with them all.

Scarlet had the smart idea to attack the original corpse. The damage done to it affected the other spawned creatures. However, while she did so, she spoke comforting words to the priestess, telling her she was sorry all of this happened, and that she’ll make sure the villagers face proper justice.

The Persuasion check was successful, and Scarlet was able to emotionally disarm our adversary, causing her to sink to her knees and cry. The sons were still attacking us, however, but our coordinated attacks and Scarlet’s corpse-hacking finally put them all down.

I was very pleased and impressed that Scarlet was able to save the woman from her anger and despair, though she did technically murder a bunch of people in questing for her vengeance. Scarlet informed the next town over about everything that had happened, making sure any trials wouldn’t take place in Emerald Cove.

First, of course, we made sure to get paid for the completed job!

Shout outs to Chris for concocting an excellent one-shot adventure with a really fun Friday the 13th theme! Our Tomb of Annihilation adventures will resume next week.